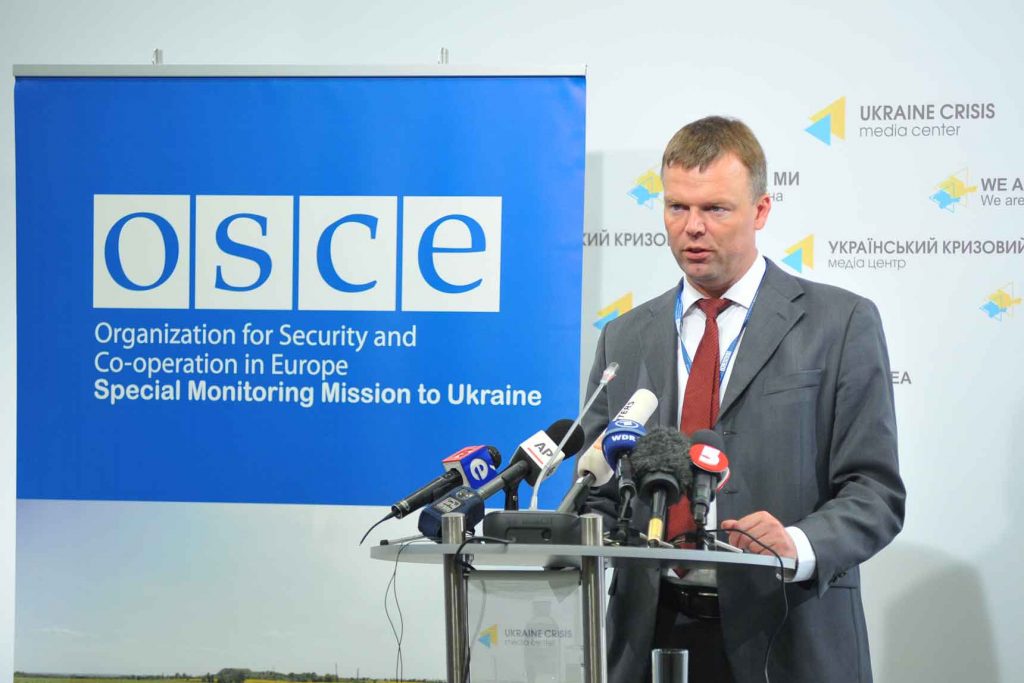 Kyiv, November 26, 2015. “The security situation in the Eastern Ukraine remains preoccupying, with frequent incidents, reaching sometimes unusually high figures,” said Alexander Hug, Deputy Chief Monitor of the OSCE Special Monitoring Mission (SMM) in Ukraine at a press-briefing at Ukraine Crisis Media Center. According to him, last Tuesday monitors registered over 570 explosions in the Donetsk region alone, an unusually high number. “Ceasefire violations included a range of weapons, including small arms, heavy machine guns, light anti-aircraft and anti-tank weapons, mortars of 82-mm and 100-mm, grenade launchers, and even heavy artillery, on both sides of the contact lines,” he explained.

In this regard, the SMM is particularly concerned about the freedom of movement for civilians in the east, and the problems caused by mines and unexploded ordnances. “On November 19, the SMM facilitated and monitored the adherence to ceasefire on the contact line near Zolote, Luhansk region, enabling the Ukrainian Armed Forces medics to recover the body of a member of demining team, who had been killed in a mine accident on November 15, along with two colleagues,” Mr Hug explained.

According to him, on November 25 outside the government-controlled Pervomaiske, the SMM heard from the direction of government-controlled Pisky, Opytne, and Vodiane explosions caused by outgoing and incoming mortar (82 or 120-mm), artillery (122-mm), and tank fire, as well as rifle, heavy-machine-gun and automatic grenade launcher fire. In th eso-called “Luhansk People’s Republic” (“LPR”) -controlled Vesela Hora, the SMM heard small arms, heavy machine gun and artillery (152-mm) fire outgoing 10 km north-north-west of its position. On November 22, from the Donetsk railway station, the SMM heard 57 explosions in areas north and west of Donetsk city. On November 23, the SMM observed numerous ceasefire violations, including small arms, light infantry and light anti-aircraft fire. In Krasnohorivka, the same day, the SMM heard some 17 explosions, including outgoing in incoming mortar fire, small arms fire and heavy-machine-gun. On November 17 in the area between Zoriane and Kurakhivka, the SMM observed the impact crater located in 400 m from a residential building. The SMM assessed that the rocket had been launched by a Multiple Launch Rocket System.

Mr. Hug insists the SMM observes limitations to freedom of movement: longue queues, time-consuming procedures, lack of sanitary facilities and danger of mines and shelling. “The initial planed capacity of the checkpoint was 2500-3000 people a day, however currently 6000-7000 people try to cross daily,” he explained. In addition, the SMM observers are denied access to certain areas for “security reasons”, they are granted conditional access, or being imposed an armed escort. “For example, the so-called “Donetsk People’s Republic” (“DPR”) members told the SMM to leave the village, saying written permission was required from their commander. On the next day, in another location, so-called “DPR” members at a heavy weapons holding area refused entry to the SMM, saying their superior had ordered them to do so. On November 20, so-called “LPR” members denied the access to Sokilnyky to the SMM,” Mr Hug added. He followed up by saying that the same day, Ukrainian Armed Forces personnel denied the SMM access to a permanent storage site without providing an explanation.