Kyiv, November 27, 2015. Sporadic violations of ceasefire were observed in the ATO zone yesterday. The situation was the most difficult in the vicinity of Donetsk. Russia-backed militants launched six shells from 82-mm mortar launcher near Krasnohorivka, and a 30-minutes firefight took place near Kamianka north of Avdiivka. “Six militants moved out of the neighboring Vasylivka village, shooting at the ATO forces from close distance. Following the exchange of fire, the militants retreated,” informed Presidential Administration spokesperson on ATO related issues Colonel Andriy Lysenko at a press briefing at Ukraine Crisis Media Center. 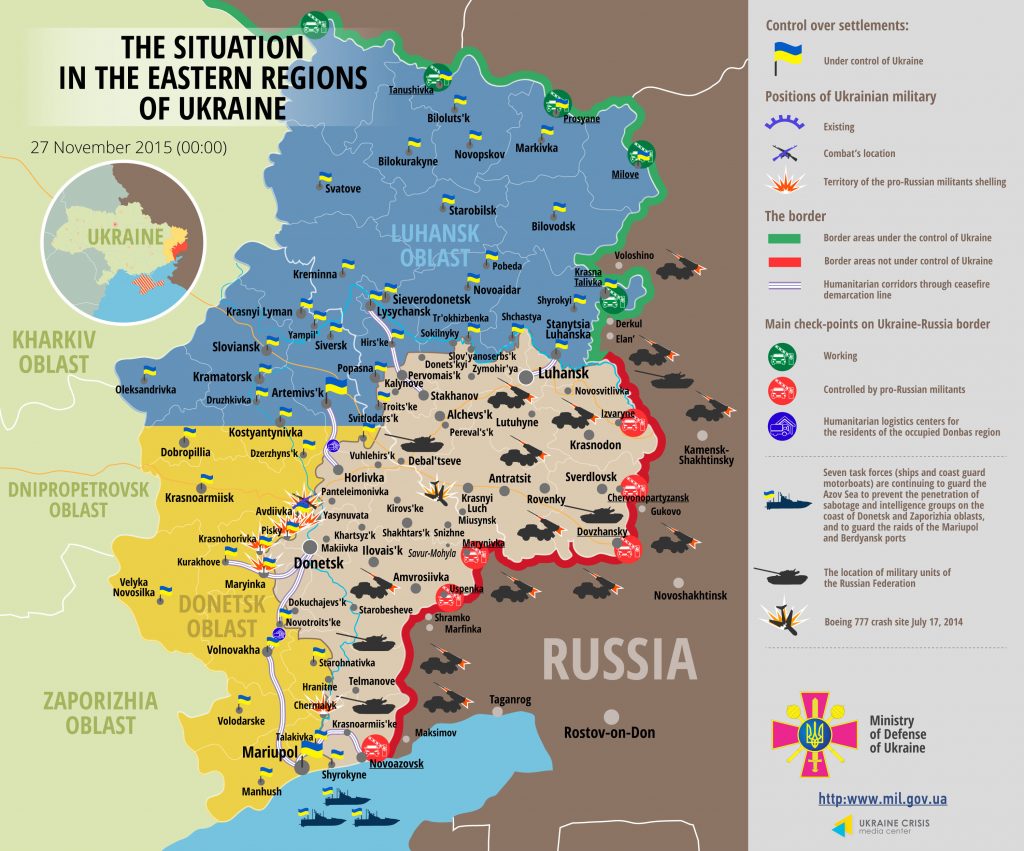 One brief provocation was recorded in the Mariupol sector near Chermalyk village, where militants shot several times from the opposite bank of the Kalmius River. No fighting was observed neither in the Donetsk sector, near Svitlodarsk and Horlivka, nor in Luhansk sector. According to Andriy Lysenko, Ukrainian Armed Forces incurred no loss in combat and no troops were wounded. Nevertheless, a resident of Bolotne in Stanychno-Luhanskyi district tripped a mine and was taken to hospital with leg injuries.

The spokesperson informed that Ukrainian border guards in Milove detained two soldiers of Russian internal troops wearing uniform with corresponding insignia. According to the troops, they were going to Armavir in Krasnodarskyi Krai (Russian Federation). “The Russians explained they “lost their way” and got to Ukraine by chance. A border squad detained them and now they are waiting for a court decision following hearing of the fact of their illegal crossing of Ukrainian state border,” said Col. Lysenko.

Apart from the abovementioned Russian troops, law enforcements detained a number of people who participated in activity of the self-proclaimed ‘Luhansk People’s Republic’ (‘LPR’) and ‘Donetsk People’s Republic’ (‘DPR’). A militant who had been directly involved in combat activity was detained in Lysychansk. He also inspected private vehicles in Zorynsk controlled by militants. Ukraine’s Security Service investigators detained a militant with nom de guerre ‘Komisar’ in Lutsk. He was involved in siege of Ukrainian Armed Forces during annexation of Crimea. Moreover, he was awarded a medal ‘For restitution of Crimea’ by the Ministry of Defense of the Russian Federation, and later fought in the ranks of the self-proclaimed ‘DPR’. ‘Komisar’ came to Lutsk trying to make money from illegal extraction of amber.