Kyiv, November 30, 2015. Yesterday militants of the so-called “Donetsk People’s Republic” (“DPR”) opened fire upon a civilian vehicle. “The incident took place on entry to Donetsk at one of the militant checkpoints. The militants fired upon the vehicle when it was on its way from Mariupol as the driver started making a U-turn having not reached the checkpoint. As a result of the attack the driver was heavily wounded,” said spokesperson of Presidential Administration on ATO-related issues Colonel Oleksandr Motuzyanyk at a press briefing at Ukraine Crisis Media Center. He also noted that the driver succeeded to return to the nearest Ukraine-controlled checkpoint. Ukrainian servicemen took him to Volnovakha hospital from there. 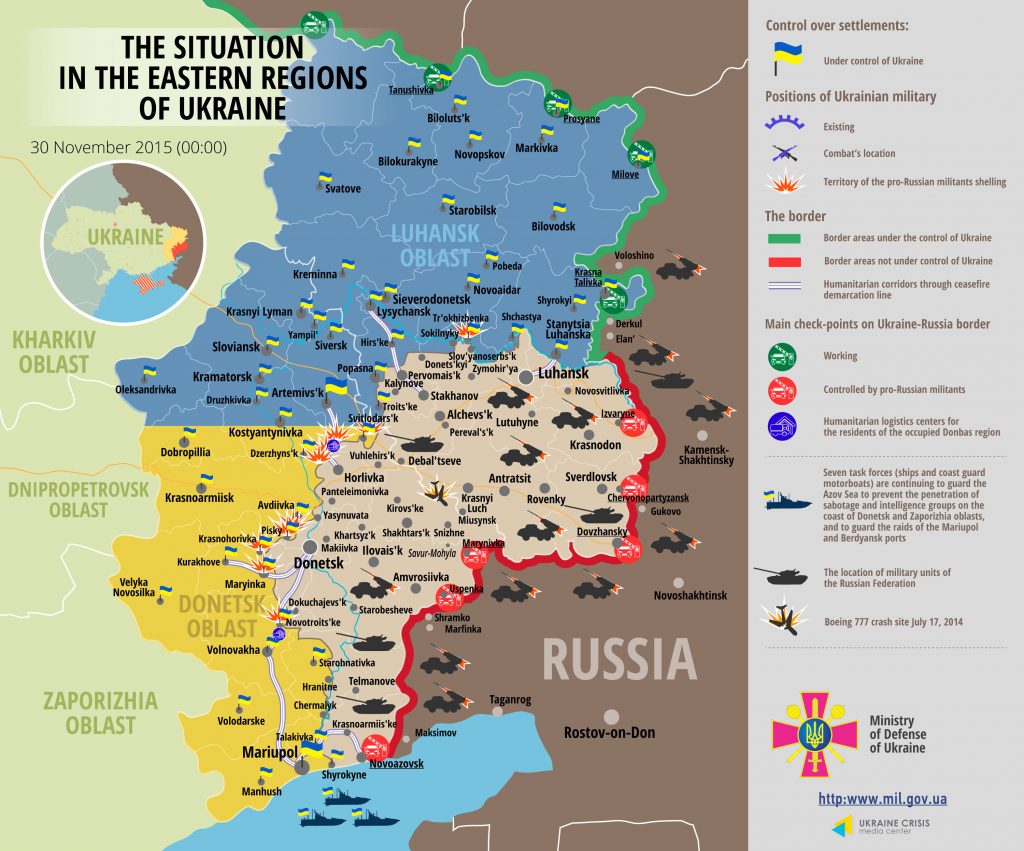 Provocations by Russia-backed militants were registered in all sectors over the last day. In the Luhansk sector militants were firing for several minutes from a grenade launcher near Tryokhizbenka, north of the Bakhmutska road from the opposite side of the Siversky Donets river close to Slovyanoserbsk. Four provocations were registered in Luhanske located south of Svitlodarsk and near Horlivka, one of them was with the use of an infantry fighting vehicle. Militant snipers were firing in Mayorske. Situation on western outskirts of Donetsk remains turbulent. “The attacks took place mostly in the evening from 6pm to 12pm. At around midnight the adversary fired two mines upon ATO forces near Krasnohorivka from 82-mm mortars. No other incidents of heavy weapons in use were registered along the entire contact line,” said Colonel Motuzyanyk. One provocation was also registered in the Mariupol sector: militants were firing from small arms for five minutes between Novotroyitske and Dokuchayevsk. “Ukrainian troops incurred no casualties over the last day, no servicemen were wounded in action,” noted the ATO spokesman.

Main Intelligence Directorate of Ukraine’s Defense Ministry said mercenaries in the occupied areas of Donbas are being continuously recruited to fight in Syria. “’Soldiers of Fortune’ are promised generous remuneration – between USD 1400 and 2000 per month. The contract has no liability as to returning remains of the mercenary to his homeland in case of death,” said Colonel Motuzyanyk.