Kyiv, December 9, 2015. Situation in eastern Ukraine has escalated sharply. “Adversary got back to the tactics of large-scale use of heavy weapons as it was in summer. Thus militant groups used mortars, 122-mm artillery, tanks and Grad systems over the last day. Most of the attacks did not include precise fire, however such actions of the adversary demonstrate its intentions to escalate the conflict and derail Minsk agreements,” said Colonel Oleksandr Motuzyanyk, spokesman of Presidential Administration on ATO-related issues at a press briefing at Ukraine Crisis Media Center. 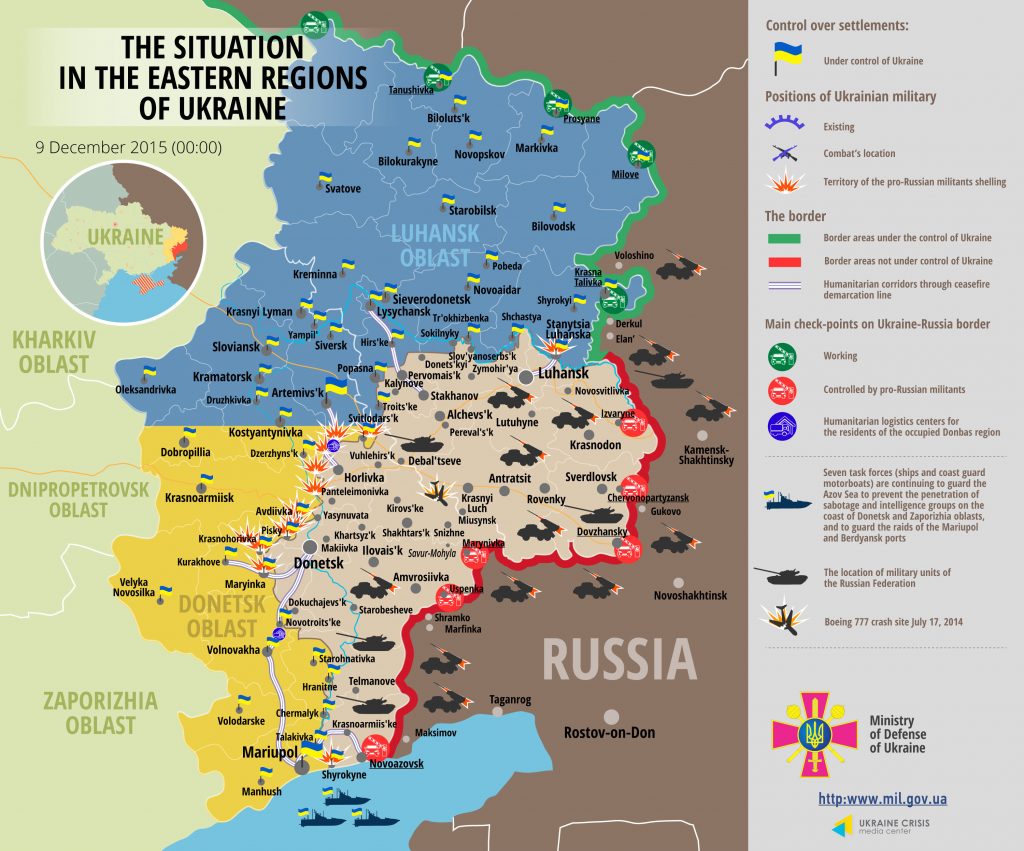 Most tense situation is observed in the Donetsk sector. Militants fired twice upon the positions of ATO forces at the Svitlodarsk salient using 82-mm mortars and an infantry fighting vehicle as well as fired a shot from an anti-tank guided missile. Mortar attack and sniper fire were registered in Zaitseve and Mayorsk. “Situation between Horlivka and Yasynuvata has escalated. Numerous militant provocations were registered in Novhorodske. There was a strong militant attack near Verkhnyotoretske with the use of tanks, 120-mm mortars and other smaller types of weapons, it lasted for two hours,” said Colonel Motuzyanyk. Western outskirts of Donetsk remain the hottest spot. “Fourteen ceasefire violations were registered in Pisky over the last day including the attacks from 122-mm artillery and 120-mm mortars. Same situation stands in Krasnohorivka, located further to the south. Occupants also used Grad multiple rocket launchers three times, they are hiding the systems in Staromykhailivka town located on the contact line. Hostile rockets landed near Zoryane village of Maryinsky district causing no casualties,” noted ATO spokesman. Moreover, ceasefire was violated in Avdiivka, Opytne and Maryinka. In the Luhansk sector militants fired several shots from grenade launchers in Stanytsia Luhanska. In the Mariupol sector a militant sniper was firing upon the ATO forces positions. Colonel Motuzyanyk reported that Ukrainian troops incurred no casualties over the last day, five servicemen were wounded in action.

Two flights of militant unmanned aerial vehicles (UAVs) were registered in the ATO zone, both in Donetsk region.

According to the Main Intelligence Directorate of Ukraine’s Defense Ministry, the number of militants of the self-proclaimed “republics” who are eager to take part in combat actions is decreasing. Thus since the beginning of December ten militants deserted from the so-called “1st motor-rifle battalion within the 9th motor-rifle regiment” deployed to Novoazovsk. Rotation plans of militant units of the so-called “Luhansk People’s Republic “(“LPR”) on the front positions in the area of Vesela Hora – Shchastia were derailed due to understaffing.

Ukrainian law enforcement staff detained several militant accomplices. One of them, a resident of Sloviansk was promoting separatist ideas over the Internet, was spreading propaganda materials of the so-called “Donetsk People’s Republic” (“DPR”), collected money for militants and was passing them the information on deployment places, routes of movement and number of units of ATO forces. Ukrainian border guard officers detained a militant in Prymorske near Mariupol, he was directly participating in combat actions on the militant side. Former militant instructor was also detained in Artemivsk. “The man nicknamed ‘Psychologist’ was instructing newly recruited “DPR” militants in psychological and combat tactics,” noted ATO spokesman.

Law enforcement staff seized five combat grenades for the under-barrel grenade launcher from a resident of Avdiivka as well as five grenades and over 300 rounds of ammunition from a vehicle driver near Sloviansk. Law enforcement staff also seized a contraband consignment – 240 boxes of Russian-produced cigarettes to be smuggled across the contact line. “The cargo was heading to the temporary occupied Horlivka that serves as a transit point for militants,” said Colonel Motuzyanyk.