Kyiv, December 10, 2015. At least 150 interrogations, 100 searches, 100 detentions and 70 court hearings have happened in the temporarily occupied Crimea over the last 6 month. 30 of them have happened within the last 3 month. Such figures were announced by Mariya Lysenko, project coordinator at the Center for Civil Liberties, “Euromaidan.SOS” volunteer, at the presentation of progress report “Crimea: occupation chronicle” at Ukraine Crisis Media Center.  “In fact, every day the repressing machine progresses and continues to gain strength in order to crush any dissent in Crimea,” says activist.

Mariya Lysenko drew a particular attention to political repressions in the occupied Crimea. A number of Crimean Tatars – Akhtem Chiygoz, Mustafa Degermendzhy and Ali Asanov – are currently in detention places as accused of the “February 26 case”. These men, pro-Ukrainian activists, were detained on February 26, 2014 near the building of the local parliament – the Crimean Verkhovna Rada – and accused of mass riots. The activist added that according to information recently published at Crimean Procector’s Office website case materials has already been referred to court, so the trial is going to start. Four persons are persecuted for their religious opinions: Ruslan Zeitullaiev, Rustem Vaitov, Nuri Primov and Ferat Saifulaiev have been detained as members of “Hizb ut-Tahrir”. Mariya Lysenko stressed that Hizb ut-Tahrir is “a political Islam movement carrying on political enlightenment. In the democratic countries of the West, it is not seen as an extremist organization. However, since Russia has taken control over Crimean peninsula, law enforcement officers started persecuting Hizb ut-Tahrir members”. Ms. Lysenko quoted the lawyer of the detained stating that during the trial there was a number of procedural irregularities and the principle of transparency has been violated. “We faced a new form of persecution: persons that wish to be present at the court hearing are given summons right at the entrance to the court. Consequently, these persons become witnesses and can’t further be present at the hearings,” said the activist.

In addition, “Euromaidan.SOS” volunteer mentioned the case of Yuriy Ilchenko. The young man is accused of allegedly “inciting hostility and hatred” for his position against Crimea annexation. Yuriy Ilchenko may be sentenced up to 20 years of prison. Mr. Ilchenko was detained in June 2015, however Ukrainian lawyers still know little about his case, said Ms. Lysenko. According to the latest information, in September the court extended his remand in custody.

“All persons I mentioned above are directly deprived of freedom. They cannot freely move or leave the place of abode”, Ms. Lysenko emphasized.

Mariya Lysenko mentioned as well that there is a number of other criminal proceedings on which trials are going on. She also mentioned, the case of May, 3 2014: several activists were detained on that day when thousands of Crimea Tatars came to Armiansk city (Crimea) to meet their national leader Mustafa Dzhemilev. “Occupation authorities selected for them preventive punishments, from fines to suspended sentences,” said Ms. Lysenko.  In addition, she drew attention to the case of Oleksandr Kostenko, a Euromaidan activist. He has been detained in autumn 2015 and was illegally convoyed to Russia. The authorities continue pressure him, in particular, by initiating a case against his brother. “The shameful practice of USSR times is coming back,” summarized Ms. Lysenko.

In addition, de facto authorities undertake a number of other forms of persecution such as searches, interrogation, detention as well as beating and kidnaping. “The whole localities are encircled by police officers, local residents are not informed about that. Then they see come masked people in camouflage, armed with automatic rifles, everybody gets frightened. These men are searching houses on pretext that the neighbours’ bicycle has been stolen, so they need to make a search,” explained Eskender Bariev, Crimean Tatars Human Rights Committee Coordinator. The house of Mr. Bariev parents has also been searched as a form of pressure on him. According to Mr. Bariev, recently de facto Crimean authorities began searches in houses of Crimea blockade activists, there is also a pressure on their relatives.  Journalists that have reported about Crimea blockade have also been searched, in addition, water and gas supply to their houses has been suspended. “Human rights situation in Crimea remains difficult. People are under a constant pressure, they cannot freely express their opinion or participate in peaceful assemblies. We want to emphasize one more time that occupation authorities in Crimea violates human rights, occupant State commits criminal acts”, declared Eskender Bariev.

Riza Shevkiev, general director of the charity foundation “Foundation “Crimea”, said that the prosecutor’s office has already given him a warning for Ukrainian flag on the building of his foundation. The flag stayed on the building for 8 month. “I received three warnings from the Crimea prosecutor’s office on “committing extremist actions” but it was not sufficient to make me take it off. Consequently they opened an administrative case against Foundation Crimea, and arrested 7 buildings in Simferopol, including the building on Schmidt st., 2 with the Ukrainian flag and forbоde the activity of Foundation Crimea,” said Riza Shevkiev. Moreover, the foundation had to pay 4,5 million ruble fine, and Mr. Shevkiev personally had to pay 350 thousands ruble fine as director of the foundation. At present, he said, there have already been over 30 court hearings. According to him, all these hearings were politically motivated. “Even some judges that still are able to feel remorse of conscience said discreetly after the hearings “sorry, we know that the court decision is not just, but FSB (Federal Security Service of Russia – UCMC note) has insisted on that,” Mr. Shevkiev said.  He mentioned as well that security service agents have visited him and told that if he doesn’t give up his struggle, a criminal case will be initiated against him and he will be imprisoned. 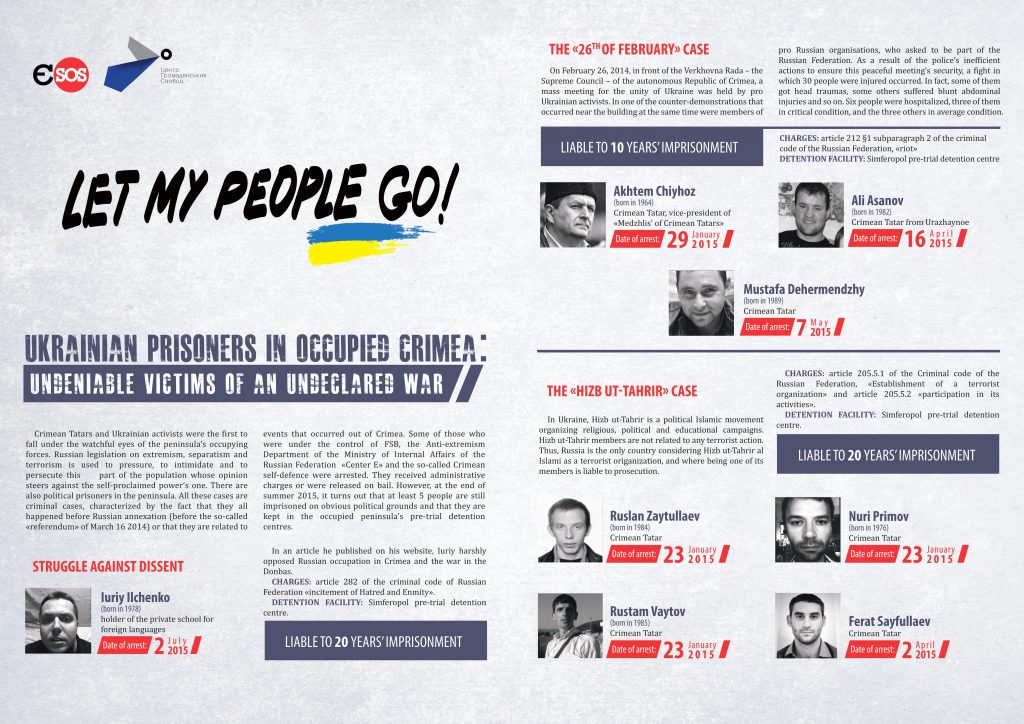