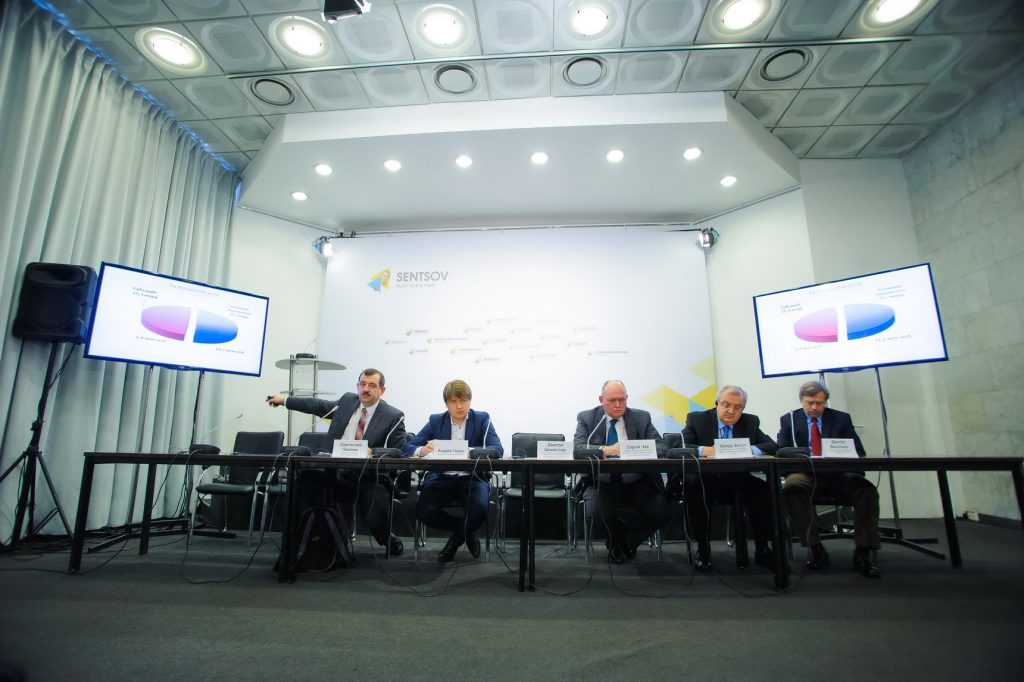 Kyiv, February 4, 2016. The function of the state is to lobby consumers’ interests to monopolies, not vice versa. The Ukrainian business model in the housing and utilities system is actually a waste of money that could be spent on energy efficiency activities and to help people decrease their consumption, said Svyatoslav Pavlyuk, expert on energy efficiency speaking at a press briefing at Ukraine Crisis Media Center. According to the expert one of the problems in Ukraine’s energy sector is high unit consumption for households. It is explained by huge power losses in households and through the power transmission process. Consumption needs to be decreased; it is not enough to have the subsidy system in place. “Individual consumers paid UAH 25,7 billion, the subsidies covered UAH 25,3 billion. We are in a situation when the state is paying half of housing and utility bills […]. Individual consumers even at today’s price level are not paying the bills they are issued,” said Pavlyuk. “Individuals who do not get subsidies are consuming housing and utility resources at half the rate of those who do get them.” That’s why the existing subsidy system is de-facto harming energy efficiency, he is convinced. Thus, if money is invested in energy efficiency it is much better for the country than wasting it. “If a national energy efficiency fund is formed… it would considerably change consumers’ rights and opportunities,” noted Pavlyuk.

According to Andriy Gerus, energy expert, Ukraine currently needs investment, particularly from foreign sources. “A flow of investment and increase in number of efficient technological players will lead to de-monopolization and de-oligarchization. Both issues are at the center of discussion in our country,” the expert said. Moreover privatization of state-owned companies will stimulate a decrease of corruption in the sector and will positively influence the currency rate. On the one hand the rate is established on the market, on the other a flow of investor support can directly influence the currency rate, he is convinced. Moreover Gerus said that “control over the work and preparation for privatization of state-owned companies and sector players in general requires an immediate change of standards and rules, of feedback and respective cooperation among the ministry, regulator, the State Property Fund and law enforcement if needed.” “These are not mere words but particular figures. Looking at these two-three companies we see that the state is losing UAH 1,5-2 billion over 1,5-2 years,” noted Gerus.

Shukru Bogut, Senior Energy Advisor, USAID Office of Energy & Infrastructure Programs said that in order to improve the situation in the sector and to introduce EU directives, cooperation between the state and independent organizations is required. Bogut noted importance of adoption of two important laws: on regulators and on the energy market. He also noted that the aim of market transformation is to establish competition in power generation, gas production as well as in import of these products, supply power as well as supplying power to the final consumer. “The regulated portion of the market will be transmission and distribution. It will provide energy security, reliability and affordability to all Ukrainians,” said Bogut. He emphasized that the Ukrainian market has to be connected to EU energy and gas networks to ensure higher energy security. He said it is important that the government shows initiative on energy policy and energy strategy by “utilizing evidence-based methodologies such as planning least generation costs and forecasting energy supply and demand, engaging the public in consultations. These efforts will also need to address increasing of renewable energy’s share of total and provide Ukraine with a transition path for low-carbon developments,” said Bogut.