Kyiv, February 26, 2016. In the Luhansk sector of ATO zone it was calm over the last day, tense situation stands in the Donetsk and Mariupol sectors. “Situation in the Donetsk sector along the entire contact line was turbulent yesterday. Enemy was firing upon Ukrainian positions near Luhanske for over one hour. Combat actions intensified on outskirts of Horlivka: enemy used mortars in Zaitseve and Mayorsk, snipers of militant groups were firing in Novhorodske several times,” said Colonel Lysenko, spokesman of Presidential Administration on ATO-related issues at a press briefing at Ukraine Crisis Media Center. He also noted that militants made a series of massive attacks west of Donetsk near Krasnohorivka using an infantry fighting vehicle and mortars. 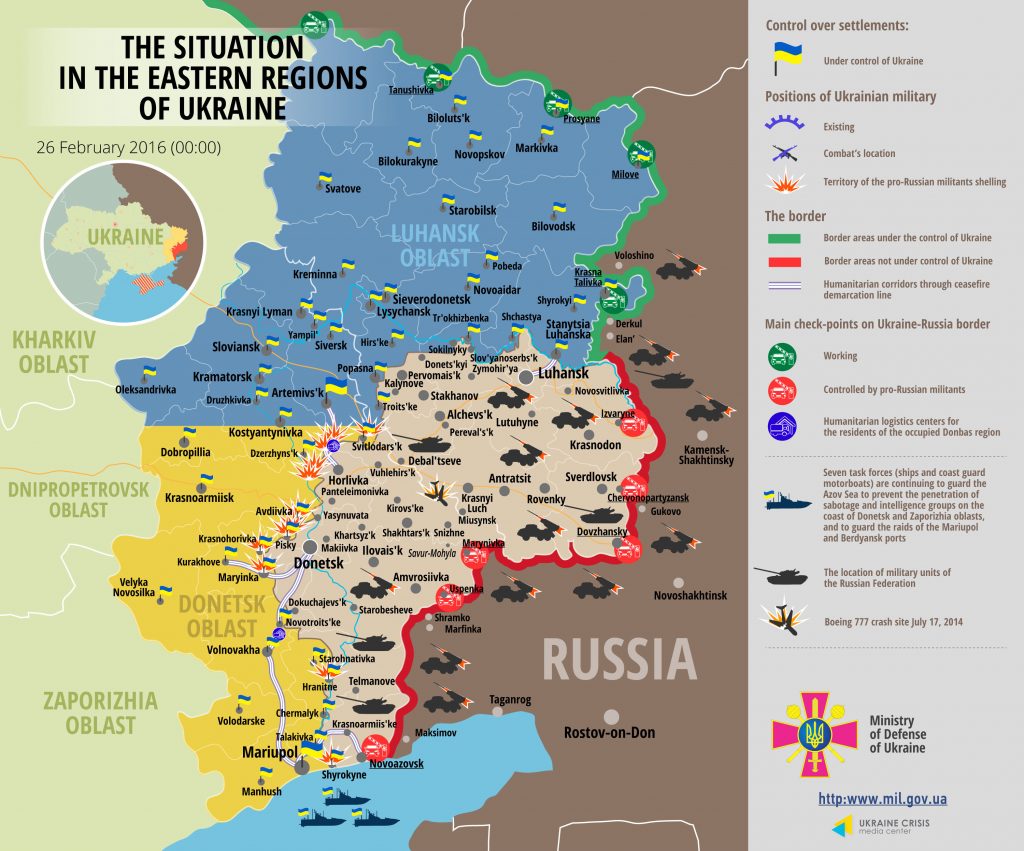 In the Mariupol sector Maryinka remains the epicenter of combat actions. “Adversary used small arms and grenade launchers of various types. Ukrainian positions in Maryinka and Hranitne were fired upon by hostile snipers,” said Colonel Lysenko. Militants also made a short-lasting mortar attack upon Shyrokyne where Ukrainian sappers continue demining works. “Leaving the village militants mined nearly each building, installed dozens of trip wires and booby traps. Ukrainian sappers have neutralized numerous explosive devices in basements, courtyards and gardens,” noted Colonel Lysenko. He added that in the Mariupol sector a flight of a militant unmanned aerial vehicle was registered.

“One Ukrainian serviceman was killed in action over the last day. It happened in Hranitne village,” said Colonel Lysenko.

According to Main Intelligence Department of Ukraine’s Defense Ministry on February 24 militants of the so-called “6th separate motor-rifle brigade” of “LPR” militant group (deployed to Stakhanov) held a meeting of ground, short-range and laser surveillance unit operators. “Military equipment was brought to the occupied areas from Russia by the so-called ‘humanitarian convoy’ on February 18,” reminded the ATO spokesman. Two incidents are also reported in Horlivka. “On February 24 two Russian servicemen attacked a local resident with weapons and got hold of his car. On February 25 a warrant officer of the Russian Federation Armed Forces was trying to burgle garages in Horlivka,” noted Colonel Lysenko.

Ukraine’s Security Service detained a subversive who mined a railway bridge between Pavlohrad and Lozova. “The perpetrator turned to be a former policeman who was trying to use a 10-kilogram TM-62 antitank mine. Explosion was scheduled for the time when Odesa-Kostyantynivka train was to pass,” noted the ATO spokesman. A 21 year old person was detained in Dnipropetrovsk region, he was distributing materials of separatist nature and was informing his curators of the moods among local youngsters.