Kyiv, March 2, 2016. Three Ukrainian troops died in the ATO zone yesterday and 14 were wounded in the last 24 hours. A vehicle of Ukrainian joint mobile team on counter-contraband operations came under hostile fire. Militants shot from a grenade launcher from the opposite bank of the Siverskyi Donetsk river when the car was proceeding along Opaskyne-Tryokhizbenka road. Moreover, a vehicle with Ukrainian troops tripped an explosive device on Hirske-Lysychansk motor road, said Colonel Andriy Lysenko, spokesman of Presidential Administration on ATO-related issues at a press briefing at Ukraine Crisis Media Center. 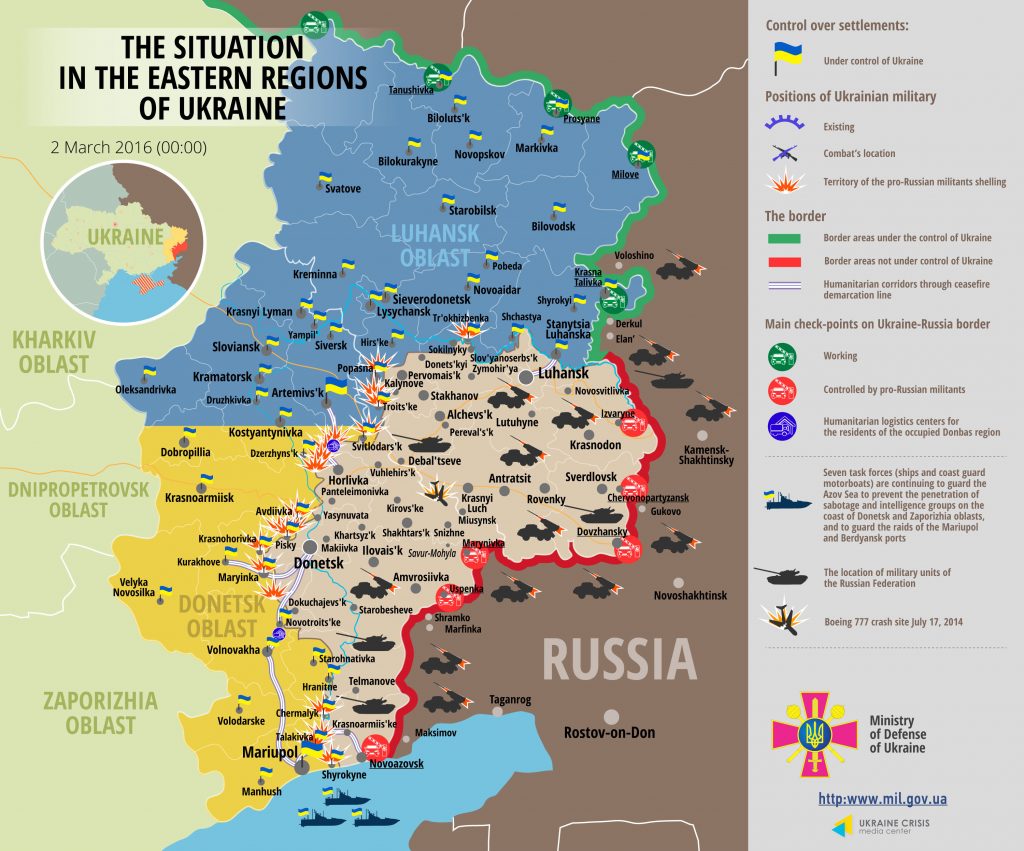 Low intensity combat activity with sporadic use of heavy armor continued in the Donetsk sector. “Russia-backed militants used 82-mm and 120-mm mortar launchers five times. Hostile provocations were registered at all the frontline areas – at the Svitlodarsk bulge, the outskirts of Horlivka and in the Donetsk airport,” said Col. Lysenko. The situation remained unchanged in the Mariupol sector. “Militants were the most active in the vicinity of Maryinka and in Chermalyk-Shyrokyne area. Moreover, insurgents used mortar launchers three times,” said the spokesman. According to Col. Lysenko, three attacks were recorded directly at the frontline.

Ukraine’s Security Service detained a member of the self-proclaimed “Donetsk People’s Republic” (“DPR”) from Druzhkivka. Another militant was arrested in Kharkiv region. “He was engaged with so-called “Main intelligence directorate of Donetsk People’s Republic” and took courses in weapon, explosive and topographic training under supervision of the Russian instructors. Following that, he fought against ATO troops,” said Col. Lysenko. He added that the detainee has a criminal record for criminal damage and car theft.