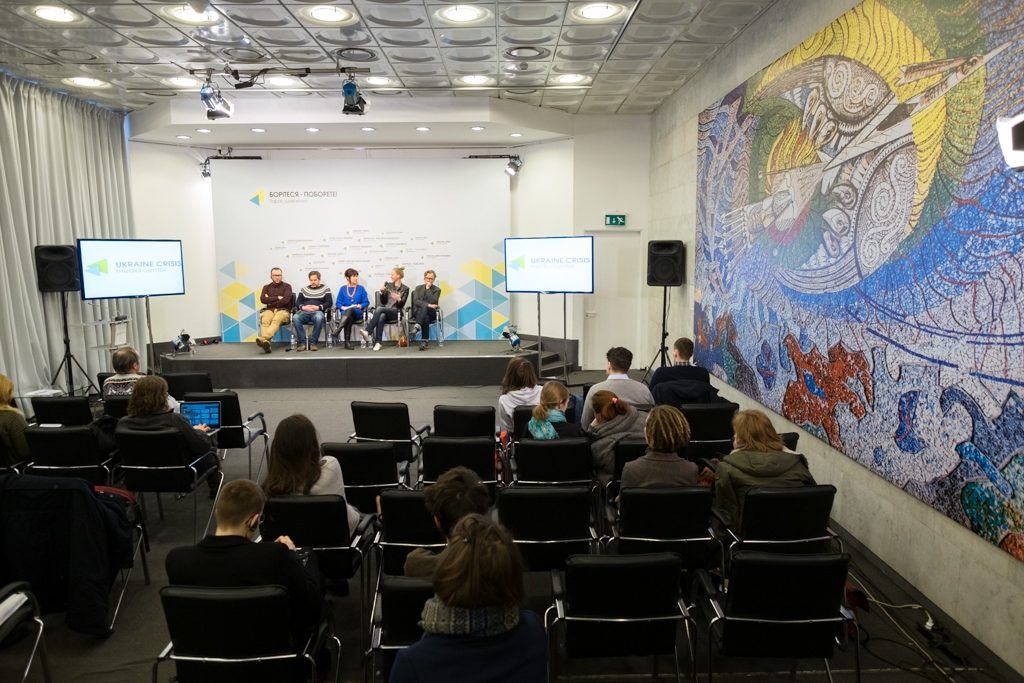 Kyiv, March 20, 2016. The Nordic countries, the Baltic countries and Ukraine have very different historical experiences. Their culture and current political and socio-economic situations are also different. “But we have something in common – our countries are located in the eastern periphery of Europe and at the crossroads of geopolitical centers of influence,” said Solvita Krese, Director of the Latvian Centre for Contemporary Art (LCCA) from Riga, opening the session at Ukraine Crisis Media Center devoted to the opening of the exhibition “Identity: behind the curtain of uncertainty”. This exhibition, according to the artists, is an attempt to inquire into what are the elements of our identity, to look “behind the curtain of uncertainty” and in this way find answers to challenges of the modern world.

According Ms. Krese, the modern era can be rightly called “an era of uncertainty.” According to Matts Leiderstam, Swedish artist, the current scale of the immigration crisis in the EU and uncertain geopolitical situation in the world generate a sense of confusion, pushing many to seek a strong leader, which is a threat to the established value system of the Western world. “The migration crisis created challenges at the political level, became a challenge for the economy, and, in addition, created situations that make us re-think our own identity”, explained Ms. Krese. The aggressive behavior of Russia in the past two years has forced northern Europe, especially the Baltic countries, to think seriously about improving their defenses. The problems with refugees that arose in Central and Western Europe, have led to demonstrations against “Islamization” in Estonia, although currently relatively few immigrants from the Middle East are arriving in the country.

According to the artists, in this era of uncertainty and fear, it is art projects that can help find the right solutions. For example, to prepare his socio-artistic project, Oliver Kochta-Kalleinen interviewed 101 inhabitants of Finland, representing all categories of the population, and he unexpectedly found that they were “much more complex than it seemed, and wiser than those one can imagine from the stereotypes about the Finns.” “After this trip, I look positively to the future. All these people proved to be very decent,” he said. Matts Leiderstam and Oliver Kochta-Kalleinen pointed out that the fears about immigrants in Europe are mostly associated with the fear of gradually losing national identity, to dissolve in a mixture of other cultures, but in fact, national identity is, firstly, only a component of personal identity. Secondly, national identity in itself, said Mr. Kochta-Kalleinen, “is largely a fiction, an imagined community. This “script”, this fiction can be rewritten and “played with”. Considering his own experience (German with a Slavic surname which he now changed to Finnish, speaks English and has five passports) and the study of the micronation’s phenomenon, he sees opportunities rather than threats in modern global realities.

As for Ukraine, art can also become a tool for solving the largest problem – the consolidation of those divided by the war; and this exhibition is a kind of guide on this way. “This syndrome should be treated for a long time. But through art, a peaceful program of mutual understanding, we can take a shortcut and speed up our convergence,” stated Ukrainian artist Roman Minin. In his opinion, one of the main reasons that the war in Donbas became possible is its voluntary isolation, including culturally, throughout the years of Ukrainian independence. In this regard the Donbas has much in common with the so-called Pridnestrovian Moldavian Republic (PMR), which can be clearly seen in the works of Kristina Norman, an Estonian artist, who studied “visual simulacra” – monuments and commemorative rituals – in Transdniestria. The artist became interested in the phenomenon of mythologizing monuments and rituals of the Soviet epoch during the scandal about moving the Soviet-era monument from the center of Tallinn to the outskirts. For those who have some nostalgia for the Soviet past, the monument was a “frozen memory” which maintains ties with the already non-existent past. The artist believes that, as a formation, the PMR is a kind of “living memorial to the Soviet Union with all corresponding visual codes and rituals.” Ms. Norman drew attention to the fact that though these visual codes in the PMR are created by politicians, one cannot but infer that it is in demand from the society. “On the one hand, politicians create these visual codes and build more and more monuments, and on the other, the public demand them. Because, when everyday life is so unbearable, there is an internal need for such a consolidating ritual. Even if people are critical of the fact that the country is run by some oligarchs and a permanent president, they share a culture of belonging to this community,” she explained.

In common with residents of Transnistria, pro-Soviet Donbas residents persisted in keeping the mythologized past, which cannot be returned to. According to Roman Minin, the only positive result of the senseless war is the fact that it “broke” this voluntary isolation. “Many people from Donetsk region, probably for the first time, feel that they live not only in Donetsk region but also in the world,” he said. In his view, the war has a chance to become the impetus to generate new ideas, new cultural codes, and in this respect much depends on the initiatives of Ukrainian artists – both musical “cultural trips” to the east, and long-term visual projects like the exhibition “Identity: behind the curtain of uncertainty.” The artist stressed that to come to an understanding with Donbas it is necessary to focus not just on issues of national identity and consciousness, but also on economic aspects. “It is important to discuss the economic outlook, which will ensure well-being in the future. Apart from being aware of his nationality, everyone has to know how he will live and where he will work the next day, what future his children will have,” he said.