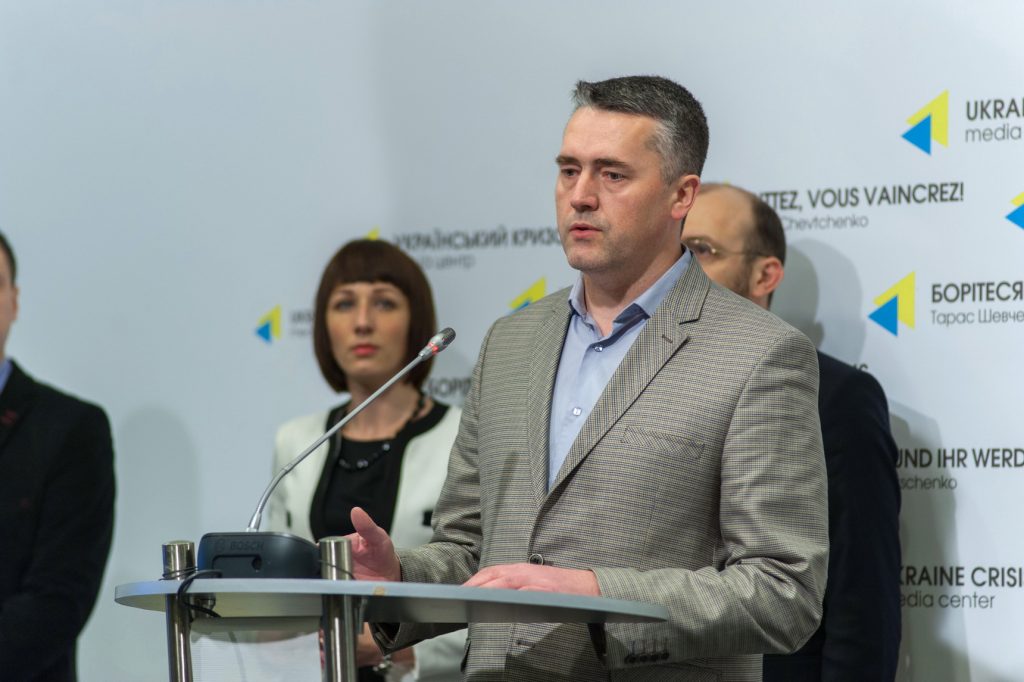 Kyiv, March 21, 2016. Civic activists have founded the “Engage Yourself ” (Vklyuchaisia) initiative to protect their rights. “It is a targeted initiative that aims to influence the authorities through the forces of civil society, destroy monopolies in state-run and utilities sectors as well as improve the quality of life in local communities,” said Zhanna Solovyova, Head of the board of Zhytomyr regional youth civil organization “Modern Format” (Suchasny Format).

Bohdan Malynyak, Head of NGO “Expert-analytical group “Accent”, commented “It often happens that at the local level citizens feel no ownership of budget money”. Malynyak spoke about the recently introduced practice of public budget reporting . The practice foresees that each administrator of budget money reports on what money was used for the works implemented and all reports are published on official websites which are accessible to everyone.

Denys Mylyi, Head of Ternopil regional organization of the “Democratic Alliance” party noted that the initiative helps engage active citizens and resolve the city’s problems. Mylyi noted that one of the daunting problems facing Ternopil is waste recycling. “It is a real danger to our city. What makes the situation even worse is that dangerous toxins may get even into potable water,” he noted.

“In the XXI century when advanced IT technologies are introduced, when we are switching to electric cars, when alternative power sources are used, Ukraine is drowning in waste,” said Olha Tkachuk, Head of board of the “Agency for sustainable development of Tysmenytsia region” NGO. She is of the opinion that only civic initiatives may achieve positive results.

Svitlana Storcheva, Head of the committee at NGO “United community of Kosiv region” said Ivano-Frankivsk region is suffering from the problem of a “barbarian attitude to the woods”. She said cutting of forests is devastating the Carpathians. It results in floods, droughts and drying of wells. “Moreover the Carpathian region forms the climate. This damp air is then moving through Polissia woods to the south and east of Ukraine and affecting black soil. We are thus losing the black soil. It may indeed become a nationwide catastrophe. That’s why this massive, barbarian cutting of woods is an issue of national security,” said Head of committee at NGO “United community of Kosiv region”.

“The problems that the activists from Ternopil, Ivano-Frankivsk and Zhytomyr named are symptoms of a disease that our state is suffering. It is the monopoly on authority in Kyiv. The problems are united at their basis in that they have the old bureaucratic system, corruption, lack of transparency and inefficiency of authorities,” said MP Ostap Yednak. To resolve this problem citizens and MPs need to be engaged in “targeted action”, the MP noted. Initiatives have been implemented in Zhytomyr, Ivano-Frankivsk and Ternopil. Visits to Kirovohrad, Kherson and Cherkasy are planned as next steps, the MP added.

Ganna Hopko, MP noted that in the regions where activists of the “Engage Yourself” initiative have traveled, they saw “the old practice of monopolies, severe control over law enforcement and media by local authorities, abuse of power at the local level.” According to the MP it impedes citizens’ access to information, in particular to the general city plan or to local budget as well as to quality services from regional or local-level authorities. “When at least five percent of people will engage in resolving their own problems, it will become true decentralization,” summarized Hopko.