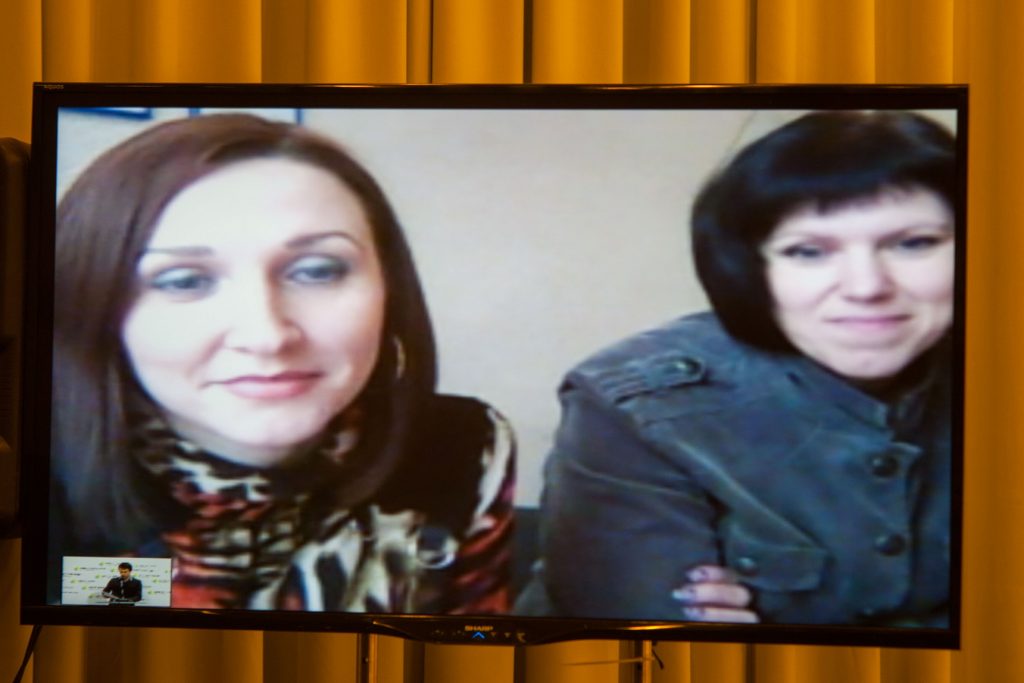 Kyiv, March 22, 2016. On March 15  ‘The Wall’ art project by Lev and Mykhailo Skop and the Cactus Creative Association opened in Lysychansk Museum of Regional Studies in Luhansk region.  The exhibition involves modern icons painted on shingles from the roof of the St. Yura Church in Drohobych and exhibited in the form of a wall. “When we realized what was brought to us, we were astounded. […]This is something unseen before, it is a modern art of icon painting. Recognizing familiar saints painted in different styles is very interesting,” said Olha Astrenina, research fellow of Lysychansk Museum of Regional Studies via Skype at Ukraine Crisis Media Center as a part of the UCMC pilot project “Spokesperson of a peaceful life”.

Lev and Mykhailo Skop conceived the idea of ‘The Wall’ as artistic embodiment of a defensive wall for Ukraine. “Icons are of spiritual power, of art serving as a barrier for Ukraine, defending it against enemies and reminding Ukrainians that we are citizens of one country. We hold together,” said Lev Skop at a previous opening of the exhibition. The exhibition is actively travelling around eastern Ukraine at present.

Over 400 visitors have already seen the exhibition. According to Kotylevska, the entire active Lysychansk community was present at the opening ceremony of the exhibition. Activists from other towns, namely Severodonetsk, came as well. Excursions consisting mostly of students and senior schoolchildren have been visiting the museum daily since then. “We receive only positive responses, both from usual visitors and artists we cooperate with,” said Astrenina. “I believe one day we will be able to communicate with icon creators too”. She added that Mr. Skops’ works also became a revelation for icon painters from Lysychansk, as none of them ever worked in such a style before. Simultaneously, exhibitions of local artists’ and art school students’ works take place at the museum. “We reached versatility, displaying both icons and children’s drawings, but we managed to combine it,” added Astrenina. The exhibition will be on till the end of March, and then it will continue to travel around the towns of Donbas.

“I would like more exhibitions from other regions to visit us,” said Astrenina and Kotylevska. According to Kotylevska, the town currently lacks cultural events compared with neighboring Severodonetsk, where much more is happening. Kotylevska said that there are many small grassroots initiatives regarding promoting public administration transparency, aid to exposed social groups, organization of entertainment and travel for children in cooperation with activists from other towns. Nevertheless, we would like social and cultural life to become more vibrant. “Lysychansk lacks attention, despite the fact there are over 100 thousand inhabitants who are a promising audience,” said Kotylevska.