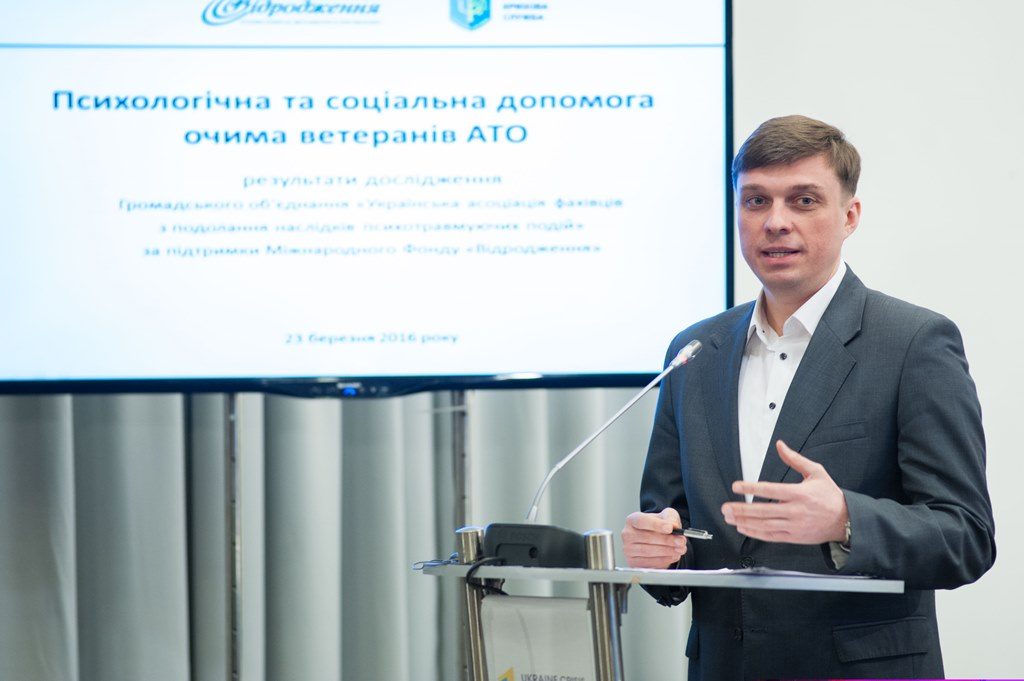 Kyiv, March 23, 2016. 45% of interviewed servicemen assessed services rendered by government agencies as ‘good’. This is one of the conclusions voiced by Oleh Novak, psychologist at NGO “Ukrainian association on recovery after psychotraumatic events” during a discussion at Ukraine Crisis Media Center based on the results of the survey “Psychological and social help as viewed by ATO veterans”. “Summarizing the attitude of veterans towards state support, the following results were obtained […] in total, 45% and 18% assess it as ‘good’ and ‘excellent’, respectively, said the psychologist. In addition, 28.6% believe government agencies’ services are ‘satisfactory’ and 8.4% – ‘poor’” (ed. – 91.6% total for ‘excellent’, ‘good’ and ‘satisfactory’), Novak added. According to the survey results, ATO veterans who came back from active areas may receive too little information regarding certain services of psychological and social help, said Novak.

Another question was the satisfaction level of ATO veterans regarding services provided to them by the initiative of specialists of labor and social protection departments. “25% said they received phone calls from labor and social protection departments. We know there is such an initiative, they call and propose some health resort vouchers, make suggestions, but only one fourth of the respondents mentioned it,” said Novak, quoting the survey results. “Representatives of regional and district administrations contacted 18% of veterans and also proposed them some services”.  Moreover, more than 50% of former servicemen were happy about the calls. 16% of people treated phone calls from military enlistment offices as a valuable support; 46.3% out of these assessed services were considered by military enlistment offices as ‘good’ and 26.9% as ‘satisfactory’. According to the survey, 86.5% received the status of combat veterans and 17.8% said they received allocated land. At the same time, “only 41% of veterans said they have no problems with work,” emphasized Novak. 39% complained they faced sleep problems.

The survey aimed to assess the quality of psychosocial adaptation services provided by government agencies from the point of view of ATO veterans and learning about the psychological state of ATO veterans in the context of displaying symptoms of post traumatic stress disorder (PTSD), said Novak. The target group consisted of discharged and wounded participants of the anti-terrorist operation treated in military hospitals of Ukraine, totaling 431 people.

“We lack a single coordinating think tank able to bring together all these survey results, recommendations of combat military psychologists and those who are working for the government. We will probably have to create a civic council on psychological rehabilitation,” said Vsevolod Stebliuk, assistant to the Minister of Defense of Ukraine. He stated that professional non-governmental organizations must take the initiative. “If we keep waiting for something to happen in the government mechanism, it will never happen unless we push,” added Stebliuk. He also informed that the Minister of Defense of Ukraine approved a road map on creating an efficient system of medical-psychological and psychological rehabilitation. One of its provisions envisages informing soldiers via military enlistment offices on the possibility to receive psychological rehabilitation.  Moreover, certain changes must be made to the law on military service. He explained that excess leave in peace time was envisaged for servicemen, but it was cancelled due to current challenges. “In order to be able to send a serviceman to a psychological rehabilitation course, we need to pretend he is sick, mentally sick at that. Only then can he receive a a rehabilitation voucher through a psychiatrist. This is where the bigger part of statistics connected with mental disorders among ATO veterans comes from. Around 30% of these are the cases when there was a need to diagnose a serviceman with such a disorder to send him to a health resort free of charge,” said Stebliuk. Another option is going to health resort during annual leave, but most soldiers wish to spend this time with their families instead.

Oksana Korchynska, a member of parliament, said that the state has been allocating 50 million hryvnias for psychological aid to ATO veterans two years in advance. “18 million hryvnias was spent to provide psychological aid to 4460 servicemen. There is a list of 16 institutions that provided this aid […], I sent formal inquiries to these 16 resorts, and so far only two from the list confirmed they really provided aid,” she said. The deputy called upon volunteers and health workers engaged in veterans’ psychological rehabilitation to unite and form NGOs or charity funds to be able to work with institutions rehabilitating servicemen.