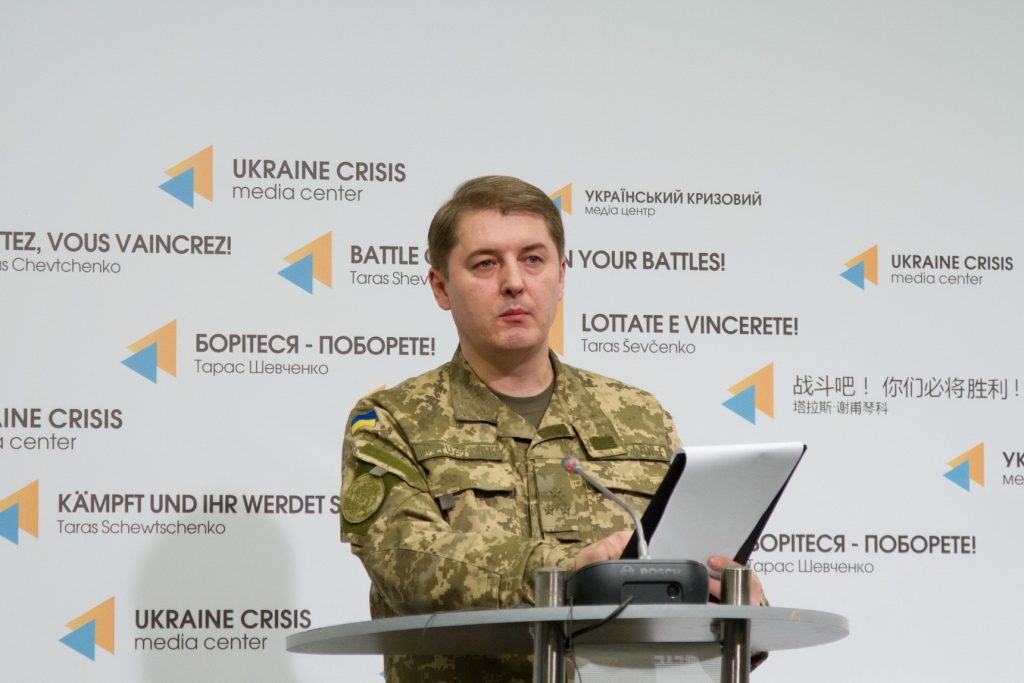 Kyiv, March 24, 2016. A firefight between Ukrainian troops and Russia-backed militants took place yesterday in the ATO zone near Novotroitske and Dokuchaevsk in the Mariupol sector. “Militants arrived in a KAMAZ truck and attacked our stronghold, but incurred losses and were flung back eastwards,” informed Colonel Oleksandr Motuzyanyk, Presidential Administration spokesperson on ATO related issues during a press briefing at Ukraine Crisis Media Center. “Moreover, two other attacks delivered by Russia-backed militant groups took place in the same area. ATO troops responded with fire in both cases,” he added. Militants also violated the ceasefire in Hnutove and Shyrokyne. In total, militants attacked four times in the Mariupol sector yesterday. 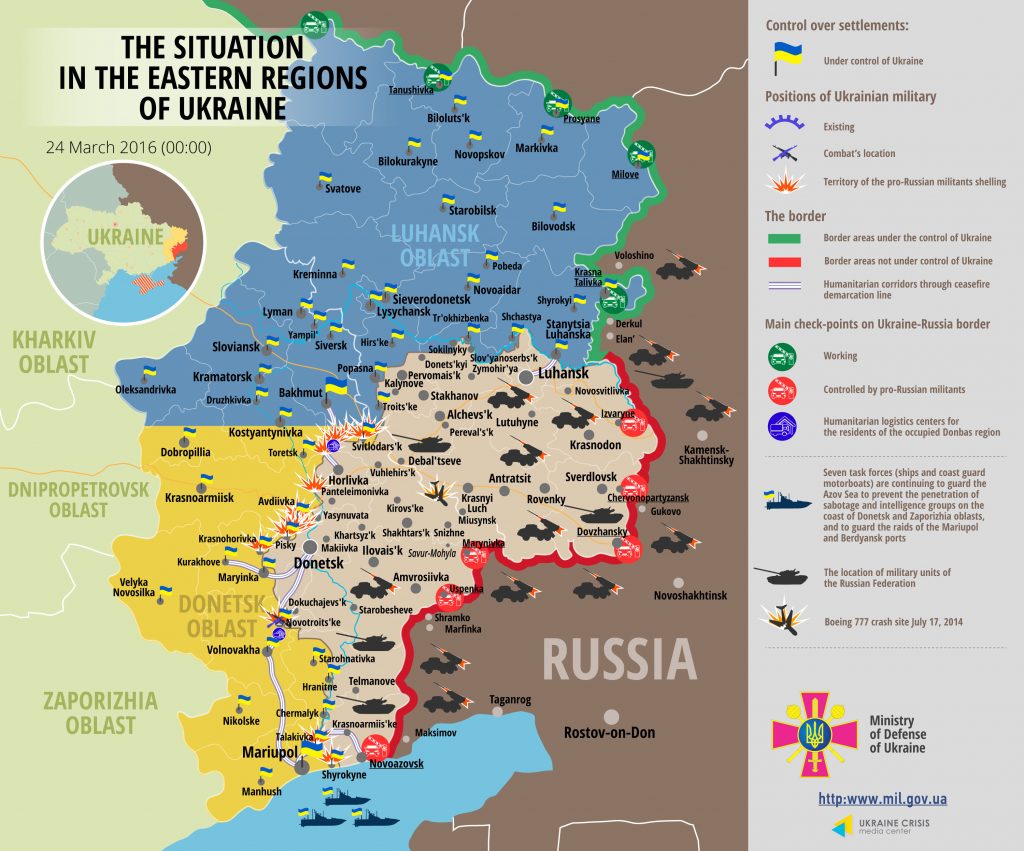 The situation was restless in the Donetsk sector along the entire frontline yesterday. Luhanske, Zaitseve, Avdiivka, Pisky, Opytne and Krasnohorivka were the main flashpoints. Col. Motuzyanyk said that militants were shooting from mortar launchers and armored vehicles. Snipers were extremely active, and combat activity drastically escalated in the afternoon, reaching a climax at nighttime. “The adversary launched over 100 mortar shells of various calibers at ATO troops’ positions. In total, 48 attacks by Russia-backed militant groups took place in the Donetsk sector yesterday. The armistice held in the Luhansk sector.

Ukrainian Armed Forces incurred no losses in combat in the last 24 hours, but four troops were wounded in Avdiivka. “Moreover, two Ukrainian servicemen tripped a mine in Stanytsia Luhanska and were injured,” informed the spokesman.

Col. Motuzyanyk informed that a Russian Mi-8 helicopter based in the occupied Crimea entered Ukrainian airspace above Kherson region during an observation flight yesterday. “The incident took at Arabatska sandspit near a gas-distribution point in Strilkove village,” he said.

According to the Chief Intelligence Directorate of the Ministry of Defense of Ukraine, a militants’ tank squadron, 12 trucks with ammunition and a signals intelligence system ‘Zoopark-1’ came to Yasynuvata recently. Moreover, due to considerable losses incurred by the so-called ‘1st army corps’ of the self-proclaimed ‘Donetsk People’s Republic’ reinforcement was supplied from Dagestan. “At the same time, Russian troops, frightened by active combat activity near Donetsk, are trying to avoid assignment to the ranks of so-called ‘11th separate motorized rifle regiment’, bribing the ‘corps’ officers,” added Col. Motuzyanyk.

A Mariupol resident allied to the self-proclaimed Donetsk People’s Republic with nom de guerre ‘Girya’ surrendered to Ukrainian troops near Pyshchevyk village in Donetsk region. He spent less than a month in the ranks of Russia-backed militant groups, since early March 2016. According to the militant, he was recruited by a citizen of Russia. “The new recruit was promised a salary of 1000 USD and enlisted as an operator of an anti-tank missile complex. Nevertheless, he was dismayed by the absence of discipline among the militants, regular alcohol abuse and non-payment of promised money,” explained Col. Motuzyanyk.

Moreover, law enforcement officers broke up a financing channel of the LPR-DPR. Businessmen from Donetsk region organized export of products from occupied territories through one of sea ports in Mykolaiv region. “The goods were exported under falsified documents,” explained the spokesman. The channel has been seized, criminals’ accounts frozen and the investigation continues”.