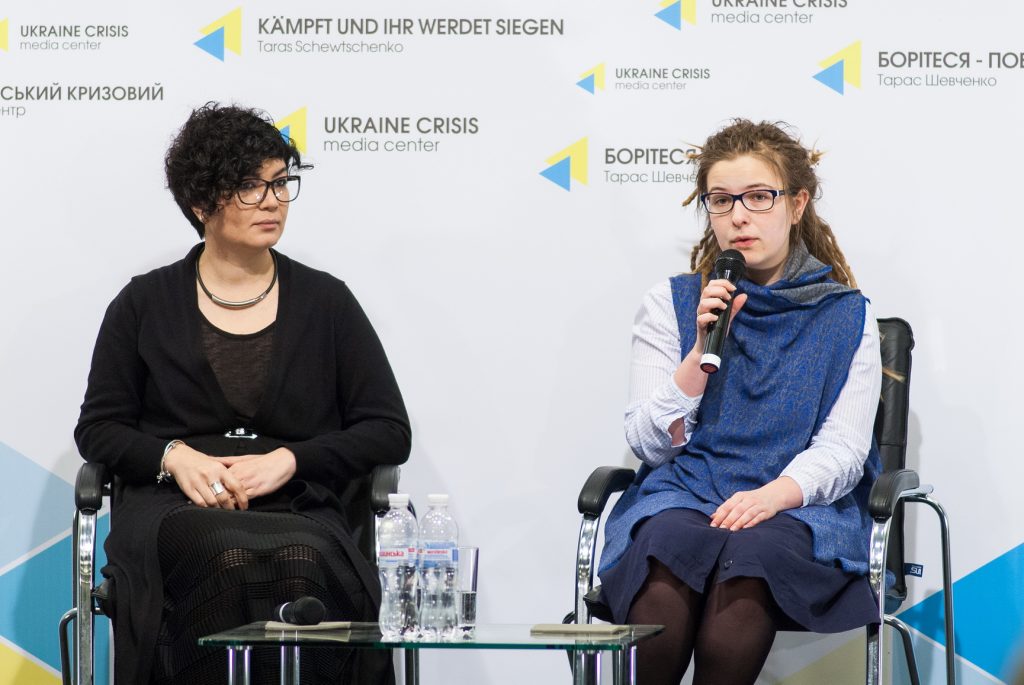 Kyiv, March 24, 2016. Russian occupation authorities are violating basic human rights principles in Crimea. More than 230 cases of human rights violations have been recorded over the two years of occupation. This was stated by Tamila Tasheva, founder and coordinator of the civil initiative “Krym SOS” (Crimea SOS) at a press briefing at Ukraine Crisis Media Center within the framework of UCMC pilot project “Spokesperson of peaceful life”.  “They range from violations related to illegal searches, detentions of people, to taking people’s lives. This have been 13 missing people, on whom no investigation is being conducted, […]  and 7 people tortured and killed,” she reported.

Prosecution is conducted mainly against two groups of the Crimean population – Crimean Tatars and pro-Ukrainian activists or those who are at least in some way associated with these groups of people, said Yevhenia Andriyuk, deputy coordinator of the civil initiative “Krym SOS” (Crimea SOS). Not only celebrities, but also ordinary residents of Crimea suffer persecution. “It started with forced citizenship, which Russia imposed, without offering an opportunity to refuse. This has resulted in limited access to many rights. Having received Russian passports people are deprived of services and the possibility to visit other countries, except Russia. And ending with social and economic things like lack of electricity, heating and light – these are the things that Russia was supposed to have settled by this time,” emphasized Ms. Andriyuk. She called the militarization and transformation of the Crimean peninsula into a “Russian military island” one of the biggest problems and violations of international law. Recently, one can observe a build up of military equipment and maneuvers on the peninsula.

According to Tamila Tasheva’s observations, public attitudes have changed. Many people are disappointed, some are just waiting, wondering what will happen next, she said. “Crimeans have always been indifferent in which state to live. If Ukraine – well, in Ukraine, if Russia – well, in Russia” said Ms. Tasheva. Similarly, political activity and voter turnout generally was not high in Crimea. “If we talk about reintegration, of course, after that it will be necessary to talk to people, conduct various peacekeeping activities, etc. This process will be very difficult for the mainland,” noted Ms. Tasheva. But she is convinced that if we start this dialogue now, give some messages to people, including discussing the status of Crimea after de-occupation, the process will be easier in the future.