Kyiv, March 25, 2016.  Ukrainian Armed Forces incurred no losses in combat in the ATO zone in the past 24 hours, but six troops were wounded. In the Donetsk sector militants shelled Ukrainian troops’ positions 38 times yesterday. “The adversaries used heavy weapons – 82-mm and 120-mm mortar launchers. Over 110 mortar shells were launched at our positions. Moreover, Russia-backed militant groups sporadically use armored personnel carriers and snipers,” informed Colonel Andriy Lysenko, Presidential Administration spokesperson on ATO related issues, at a briefing at Ukraine Crisis Media Center. He added that active shelling starts in the afternoon, intensifying after the sunset. 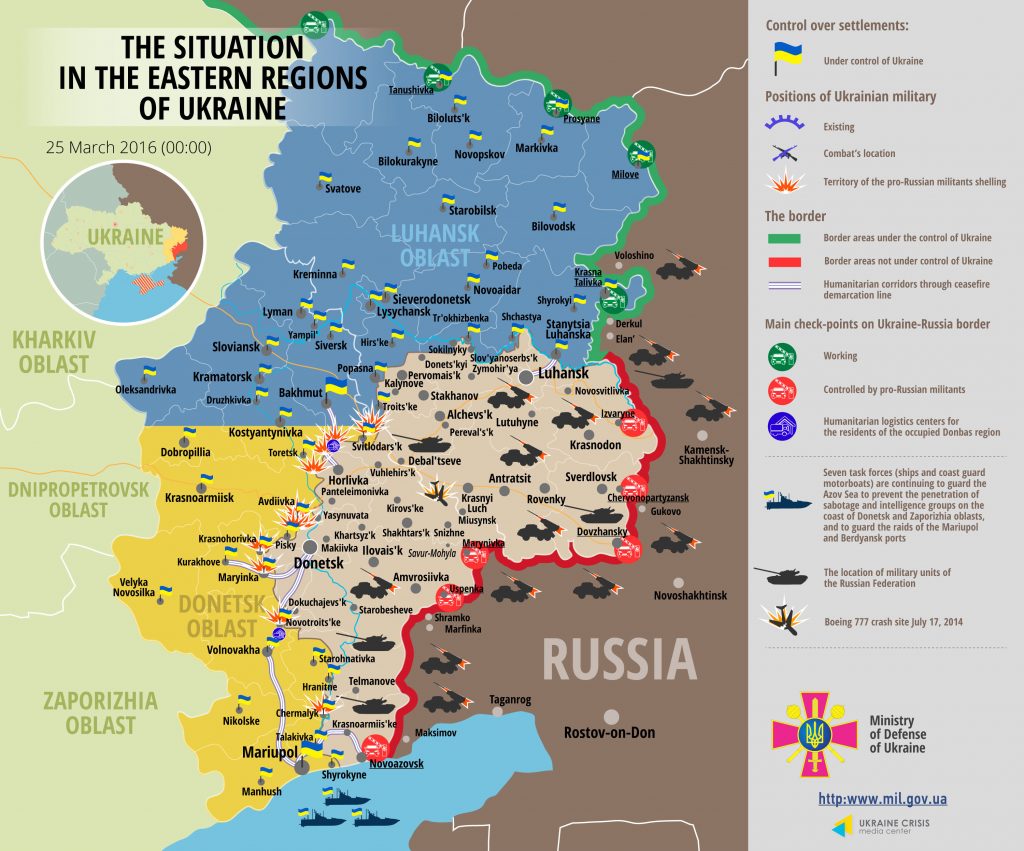 Col. Lysenko provided additionl information regarding a firefight between ATO troops and militants which took place near Novotroitske-Dokuchaevsk yesterday. Militants lost several people and up to ten were wounded. They left their damaged KAMAZ truck during their retreat. “Four troops of the Ukrainian Armed Forces who displayed courage in combat have been awarded by the brigade commander,” added the spokesman.

Russia-backed militant groups conducted 14 attacks in the Mariupol sector. Mariinka was the epicenter of combat. “Ukrainian troops repeatedly responded with fire to provocations of pro-Russian militants during a series of attacks in the evening,” said Col. Lysenko. He added that militants also violated the ceasefire in Krasnohorivka, Novotroitske and Chermalyk. Nevertheless, the armistice held in the Luhansk sector yesterday.

According to the Chief Intelligence Directorate of the Ministry of Defense of Ukraine, militants received another batch of equipment and ammunition. “An echelon carrying ammunition (up to 200 tons) arrived to Khartsyzsk railway station, and five trucks came to Donetsk loaded with military materiel, namely tank engines and batteries,” said the spokesman. Col. Lysenko informed that militants near Yasynuvata junction yesterday refused to admit representatives of OSCE Special Monitoring Mission who came on an inspection visit. “Usually such behaviour is an evidence of presence of heavy armor hidden at the frontline,” said the spokesman. Moreover, he informed that Russian troops committed a provocation on the Ukrainian-Russian border in Sumy region. “Our border guards saw two armored personnel carriers on the territory of the Russian border crossing checkpoint ‘Krupets’ opposite the Ukrainian ‘Shalyhine’ checkpoint. They approached the state border line to a distance of about 50 meters, then turned back and returned to the Russian checkpoint,” explained Col. Lysenko.

Law enforcement officers detained a militant in Avdiivka. They also found a weapons cache with 11 grenades and 5.45 mm cartridges. Anti-personnel mine MON-50 made in Russia was found near Popasna. A cache with six RPG-22 grenade launchers, three grenades and large number of cartridges of various calibers was found in Mariinka in Donetsk region.

Moreover, an RGD-5 grenade, a missile for an under barrel grenade launcher and over 60 cartridges for a Kalashnikov assault rifle were seized from an inhabitant of Avdiivka. “Moreover, Mariupol police found a weapons cache containing two F-1 and RGD-5 grenades and a charged anti-tank launcher in Kalmius district of the town,” informed the spokesman.