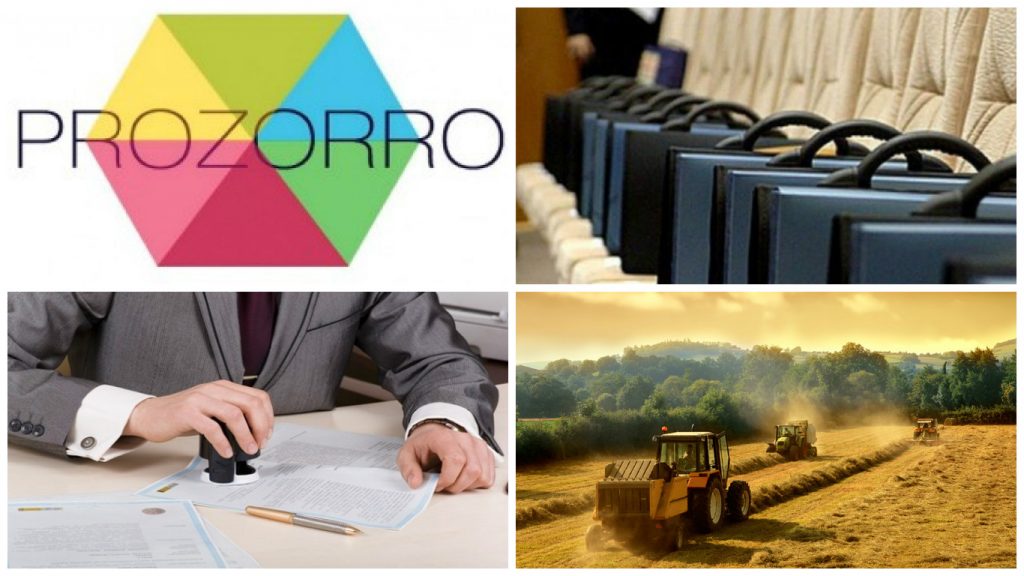 Reform of state procurement
The vested interests which historically corrupted tender processes in Ukraine are facing extinction: effective April 1, 2016 all central-level authorities will carry out state procurement exclusively via the e-procurement system ProZorro as stipulated by the Law “On public procurement”. Using ProZorro was previously optional for almost one year. State bodies and the businesses community have now experienced the advantages of the new system while developers have improved the technology. The system has proved its effectiveness and ProZorro has started operating on a wider scale. ProZorro’s benefits are already impressive: 73.5 thousand tenders have been conducted with the use of the system totaling UAH 15.3 billion in total. About UAH 1.4 billion (approx. US$54 million) has been saved. Full scale launch of the ProZorro system is due to occur on August 1, 2016. It will be then mandatory for all state budget organs without exception to purchase goods and services through the system (from April 1 it is mandatory only for central-level authorities). Full-scale launch of ProZorro aims to save about UAH 50 billion for the state budget annually – according to independent calculations this is the sum of expenditure lost to corruption in state procurement.

Reform of financial sector
Financial markets, and the banking sector in particular, is a flagship reformer in Ukraine. The Parliament approved a series of draft laws at the end of March in order to support ongoing reforms. All innovations are set to purify and revitalize the country’s financial sector as well as to bring it to international standards. Restructuring of debts by economic operators is in focus alongside a new structure of the insurance services market, protection of rights of financial services beneficiaries as well as development of derivatives. All draft laws have passed the first reading and are to be prepared for second reading shortly.

Meanwhile the Cabinet of Ministers approved the draft law that is supposed to solidify the auditing services market. It will be passed for consideration to the Parliament in the nearest days. The document is set to change market rules and remove bogus operators. The draft law was developed with participation of experts and international institutions.

Macrofinancial stabilization
Ukraine’s economy is witnessing positive developments. Industrial production in Ukraine will increase by 2 percent in the first quarter, according to the forecast by the Ministry for Economic Development and Trade. Industrial production readings in February 2016 provided grounds for optimism: for the first time in the last 42 months industrial production demonstrated positive results. Industrial growth will be achieved due to gradual improvement of the business environment and international integration, continued industrial revival in particular sectors, relative improvement of the financial state of some enterprises, and gradual renewal of consumer and investment demand according to the Ministry’s experts.

Revitalization of state finance
Verification of social beneficiaries started in Ukraine. For the first time in its modern history the country decided to deal with the social benefits sector. Finance Ministry of Ukraine is responsible for the action. In coordination with several other ministries it is going to introduce order into one of the most complicated state finance areas.

Deregulation
Transparent rules of the game, as well as simple common sense, are working in the sphere of deregulation.  The market of lubricants has been deregulated, where several ministries (the Ministry of Economic Development, Ministry of Environment, Ministry of Finance and business associations) aimed their efforts at introducing important changes. The case in point is the recycling of lubricants, that henceforth will be more environmentally friendly and non-corrupt, saving an estimated several million hryvnias each year.

Agricultural sector reform
The number of recognized players in the agricultural market will increase. The Verkhovna Rada adopted a law by which individual farms will be able to compete for resources on equal terms with larger farms. This entails the introduction of social security for the participants of family farms and open access to government support. This will also benefit consumers through enhanced quality control.

Civil service reform
There is less than a month before the new Law “On State Service of Ukraine” comes into force. This law should start the process of overhauling the Ukrainian civil service. Pursuant to this law the government approved decrees on  how civil servants will undergo re-certification under the new rules. This reform is a bedrock of other reforms which require skilled personnel. However, the speed of its implementation is of concern to the public.