Kyiv, April 14, 2016. One Ukrainian serviceman died in combat yesterday and another one was wounded. According to the Chief Intelligence Department of the Ministry of Defense of Ukraine (CID MDU), one militant died on April 12-13 and three were wounded, all of them members of so-called “11th separate motorized rifle regiment” (Makiivka), 3rd (Horlivka) and 100th (Donetsk) separate motorized rifle brigades of the 1st army corps of self-proclaimed Donetsk people’s republic. In the Donetsk sector the situation was the most restless at the entire frontline, the most intense attacks took place north of Horlivka, at Horlivka-Yasynuvata area, west and south of Avdiivka. Militants shelled ATO troops’ positions 63 times in 24 hours, half of the attacks involved use of heavy armor. “For instance, the enemy used mortar launchers 22 times, launching about 150 shells and 152-mm artillery twice, launching around 20 missiles. It must be mentioned that militants often shoot from several types of heavy armor simultaneously,” informed Colonel Oleksandr Motuzyanyk, Presidential Administration spokesperson on ATO related issues at a press briefing at Ukraine Crisis Media Center. 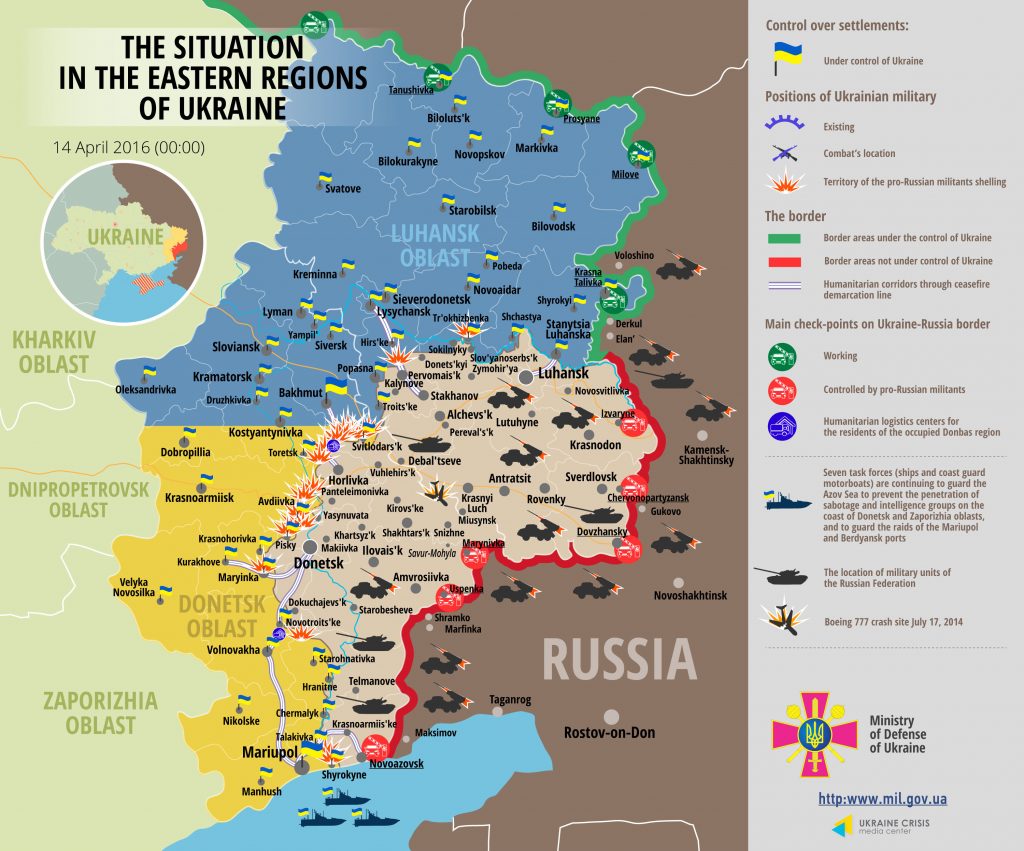 In the Luhansk sector militants violated the ceasefire near Triokhizbenka and Zolote. Russia-backed militant groups shot four times, one time of these using mortar launchers. Moreover, 13 attacks took place in the Mariupol sector yesterday. “Mariinka was the epicenter of combat, with a number of hostile sniping attacks taking place there. Militants used 120-mm mortar launchers to the south, near Novohnativka and Vodiane,” said Col. Motuzyanyk.

According to the Ukrainian intelligence, another batch of reinforcement came to the temporarily occupied territories. “An echelon carrying 120 tons of ammunition and 80 tons of supplies for combat arrived at Ilovaisk railway station. An echelon with combat equipment (two tanks), 240 tons of combustible and lubrication materials and 80 tons of supplies arrived at Khartsyzk station. 12 unmanned aerial vehicles were delivered to Komsomolske,” informed the spokesman.  Moreover, 10 trucks with personnel and ammunition came to Luhansk and a subdivision of the 45th separate mission brigade (home base – Kubinka in Moscow oblast) of airborne troops of the Armed Forces of the Russian Federation.

Law enforcements detained a former militants’ accomplice, an inhabitant of Karlivka village in Mariinka district. He helped to build a checkpoint at the beginning of disturbances in spring 2014 and was patrolling the village carrying weapons, but took no part in further combat.

Col. Motuzyanyk reminded that today was the second anniversary from the beginning of ATO. “This operation became the war for independence, freedom and European choice of Ukraine, the war with Russia. This was has been forced upon us, but we must end it with victory, for the sake of the soldiers and officers who died, for the sake of heroic Ukrainian people and its future,” said the spokesman.