Kyiv, April 17, 2016. One Ukrainian serviceman died in combat in the ATO zone yesterday and three were wounded. The situation remains the most difficult in the Donetsk sector. Militants shelled ATO troops’ positions 30 times in this area in 24 hours; almost half of them involved use of mortar launchers. “The estimated total of 100 82-mm mortar shells and over 20 120-mm mortar shells were launched by the occupants at ATO troops’ positions yesterday. Zaitseve, Maiorsk, Avdiivka and Pisky remain the ‘flashpoints’,” informed Colonel Oleksandr Motuzyanyk, Presidential Administration spokesperson on ATO related issues at a press briefing at Ukraine Crisis Media Center. 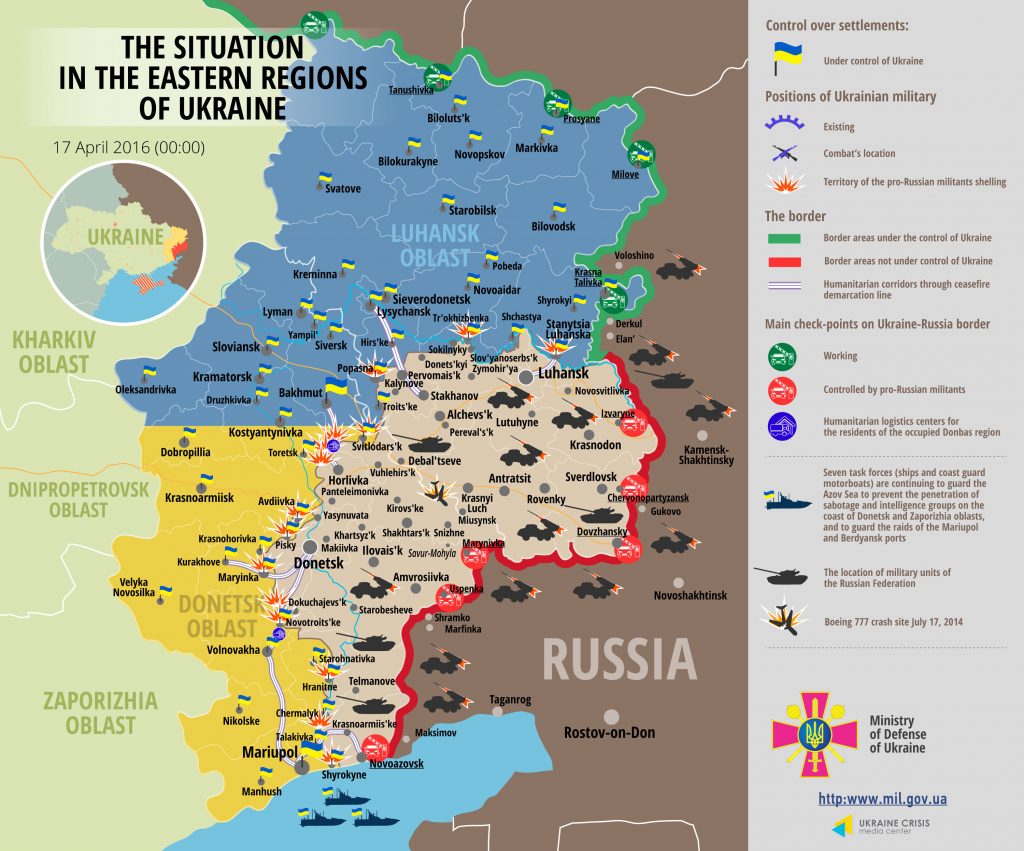 Eight attacks took place in the Luhansk sector in the 24 hours – in Stanytsia Luhanska, Triokhizbenka and Popasna, most of them during hours of darkness. In the Mariupol sector Russia-backed militant groups shelled ATO troops’ positions 12 times, using mortar launchers 2 times. The majority of the attacks took place in the afternoon. “Militants, like before, violate the armistice along the entire frontline – in Mariinka, near Dokuchaevsk and southwards, near the Azov Sea (Pavlopil and Shyrokyne),” informed the spokesman.

The Security Service of Ukraine jointly with the National Guard and the State Service for Emergency Situations checked five cemeteries in Popasna, Luhansk region, for the presence of mines and other items of ordnance. A weapons cache was found at one of the cemeteries during the raid. “The access to the cache was mined using anti-personnel bounding mine OZM-72. Military engineers cleared the cache and seized three jet-driven flame guns Shmel and assault rocket grenade made in Russia,” said Col.  Motuzyanyk.

The spokesman also said that three combat helicopters Mi-24P returned to Ukraine due to downsizing of UN mission to Liberia. The helicopters will be used for training missions and performance of combat missions at the ranks of Air Forces of Ukraine, namely in the ATO area.