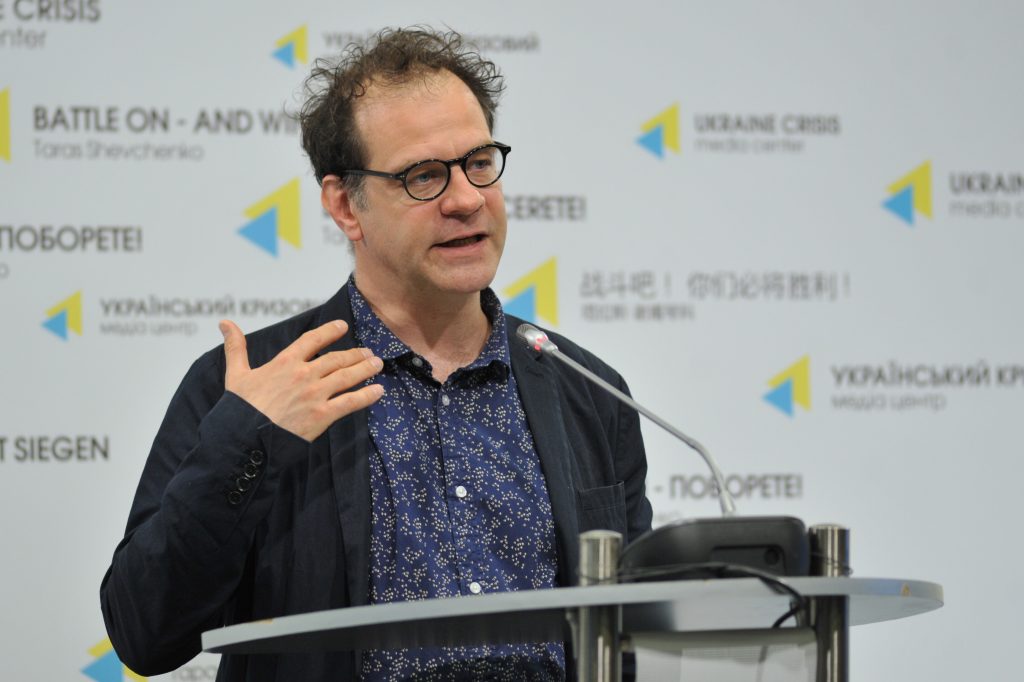 Anti-European propaganda is to weaken and destroy the European Union as a political structure with tools of information warfare that help radicalize the society sentiments. Both the EU and Ukraine shall work out a strategy to respond to the Russian propaganda.

Kyiv, April 19, 2016. The aim of Russia’s anti-European propaganda is to weaken and destroy the European Union as a political structure and to “export” its authoritarian model instead. To this end, they use all tools of information warfare that help  radicalize the society sentiments. First of all, they try to cash in on the sore subjects in an effort to discredit the existing political model and simultaneously to support the “extreme left and right wingers.” Ukraine and Europe are now facing the urgent task – to work out a strategic response to propagandistic messages and learn how to interpret them properly. “If we listen carefully to most of these speeches, sometimes we can even predict their future actions. Therefore, usually we need to forecast their next step in order to respond to anti-European propaganda,” said Boris Najman, Professor at Paris-Est Kret University (UPEC), at a press briefing at Ukraine Crisis Media Center.

According to Professor Najman, the current Russian policy towards the EU is based on the concept of Russia’s political establishment that all undesirable for them events in neighboring countries have been provoked or planned directly by the European Union. “It’s their point of view, so they begin to think how to respond to this, because they consider this a threat to them,” explained the expert. It seems that in this situation Europe does not quite understand Russia’s position. First, the EU is doesn’t to consider itself a political or military power hostile to Russia. Second, Russia’s messages are not taken literally, which prevents Europeans from assessing adequately the current threats. Prof. Najman pointed out that over the last two years Russia in its messages opposes “we” to “you,” something like “we defend democracy, and you have a dictatorship”. These messages are very similar to those used in the 30s, during repressions in the Soviet Union. “We are weak in this situation because we perceive the rhetoric as something normal and usual, though it badly destabilizes us,” emphasized Prof. Najman.

The lack of serious journalist investigations disclosing the methods and the true purpose of such propaganda is also acting in Russia’s favor. “There is a tendency to naively believe that Russia is not going to export its political model to the EU. However, the way they act indicates that in fact they are going to do this. Their main political strategy is to support anti-European political forces. […] They are just using our weaknesses to feed the rhetoric, which already exists within the EU,” noted the expert. Such a successful promotion can be exemplified by the Britain’s stand “for” leaving the EU. Russian media advance an idea that the EU is supposedly a persecutor, “prison” for Britain or whip up fears around a migration crisis. “Russia will never admit that it is going to export its authoritarian regime, but it will use the migration crisis to push Europe toward greater radicalism in this matter, believing that the political regime [in the EU] will finally become more authoritarian,” explained Boris Najman. Subtle manipulations make electoral process, especially referendums, the tools of influence: “they convince people that they will vote not for the issue or for the specific goal that have been put to the vote.” The expert pointed out that, in fact, the same strategy is used in Europe and in Ukraine: “It was used in Chechnya; Assad used it in Syria; now Putin uses it in Ukraine – a destruction of a “layer” of “moderate people”. […] The powerful layer of “moderate people” in Ukraine is represented by the civil society. These people are able to find new ways and develop new concepts that will help counteract radicalization,” he emphasized.

According to Boris Najman, one of the first tasks for both the EU and Ukraine is to provide an opportunity for a refugee status to those Russians who disagree with the policies of their own country, so that those who do not want to fight could avoid conscription. “If people find themselves face to face with the authoritarian regime, they must have some alternative,” he stressed. “The second way, which is important especially for you [Ukrainians] is open debates, a kind of “political gatherings over a cup of coffee” about how to resist propaganda. […] It can be regular meetings where people express their views and share their predictions about what can be expected in the near future,” he explained. It is important to involve Ukrainian civil society in these discussions and then, perhaps, foreigners. Public debate in Belgium in the early 90’s, organized by the “green” party, can serve an example of such fruitful cooperation. “This is a very effective tool because it creates political dynamics, introduces changes and answers the question how to counteract the propaganda messages – against women’s rights, against foreigners or against European unity,” said Prof. Najman. In his opinion, one of the basic counter-arguments to the message about “civil war in Ukraine” may be the fact that this is not a civil war, but a war against citizens, and, moreover, “imported” from Russia. “The purpose of this war is to destroy the ability of people to live together peacefully. The only way to answer this – through cultural projects through meetings – through those things that give meaning to our living together here,” emphasized Najman. Europe, in its turn, should use the events in Ukraine to analyze how Russian propaganda works, and elaborate methods to counter the growing threat of society radicalization within the EU.