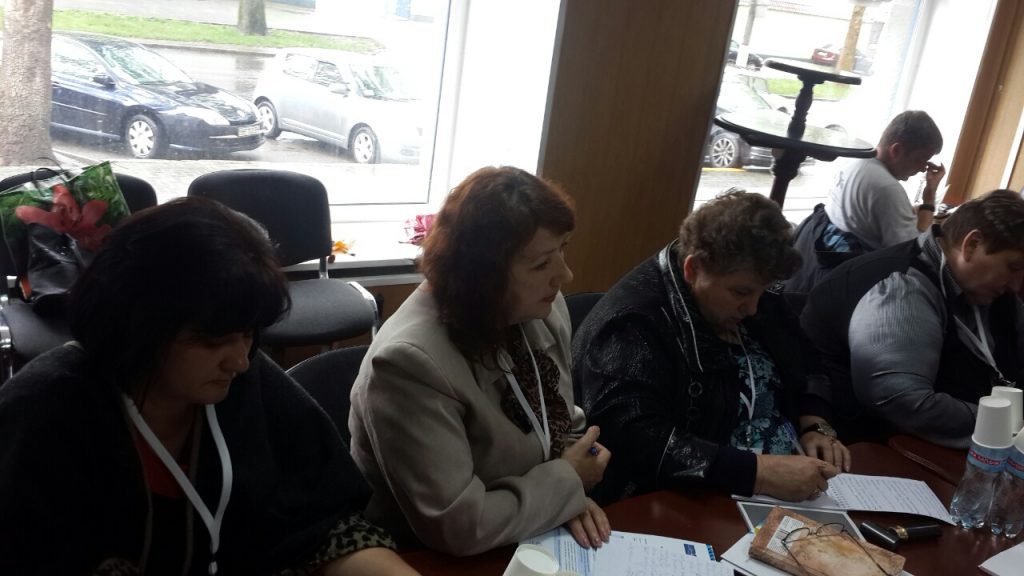 Kyiv- Mykolayiv, May 11, 2016. Journalists covering conflict-sensitive issues should be highly aware of social responsibility, rely on professional ethics and adhere to the principle of objectivity when creating their own publications. On May 10-11 print media journalists from Mykolayiv region had the opportunity to dive into the subject.

To help journalists clarify their role in conflict situations and learn to work with sensitive topics, Ukraine Crisis Media Center together with its partners organized two one-day trainings on “Coverage of conflict-sensitive topics “Hate speech” in Mykolayiv. Participants of the training were newspaper editors and journalists from all over the region. Difficult issues were covered by Maksym Butkevych, human rights activist, coordinator of the project “No Borders”, and Pavlo Kazarin, observer for “Crimea. Realities” ICTV channel host.

According to Pavlo Kazarin, under current conditions the journalist has a new task – to explain the country to the country, especially during various social conflicts, increased civil tension, emergency situations in the country, to seek peaceful ways out of the conflict.

Maksym Butkevych, coordinator of the “No Borders”, explained to training participants the essence of “hate speech”, its causes, cited existing examples, explained the consequences of its use in journalistic materials and emphasized that the removal of hate words from the media would help reduce tension in society and bring peace. According to him, unfortunately, violation of journalists’ professional standards and use of vocabulary based on stereotypes and prejudice against particular social groups is still widespread.

The training was the third event of the joint Ukrainian-Polish project aimed at strengthening the potential of local print media in Mykolayiv region. In Ukraine, the project is implemented by Ukraine Crisis Media Center (Kyiv) through regional coordinator in Mykolayiv. In Poland, the project is carried out by the East European Democratic Center (Warsaw).