Situation in the ATO zone worsens as militants attempt to break through the contact line resulting in damages and casualties. Intelligence reports prove militants plans to expand area they occupy.

Kyiv, May 16, 2016.  In the ATO area, the situation dramatically worsened in Donetsk sector. Militants intensified attacks on Svitlodarsk arc, in Zaitseve, Avdiyivka, Opytne. Over the past day illegal armed groups carried out 18 attacks, 7 of which with a mortar. They launched more than 80 mortar shells at the Ukrainian military positions. “Near Opytne enemy tried to break through the front line using a reconnaissance and sabotage group and providing covering fire from mortars and anti-aircraft gun. The battle lasted more than an hour,” informed Col. Andriy Lysenko, Presidential Administration spokesperson on ATO related issues, at a press briefing at Ukraine Crisis Media Center. 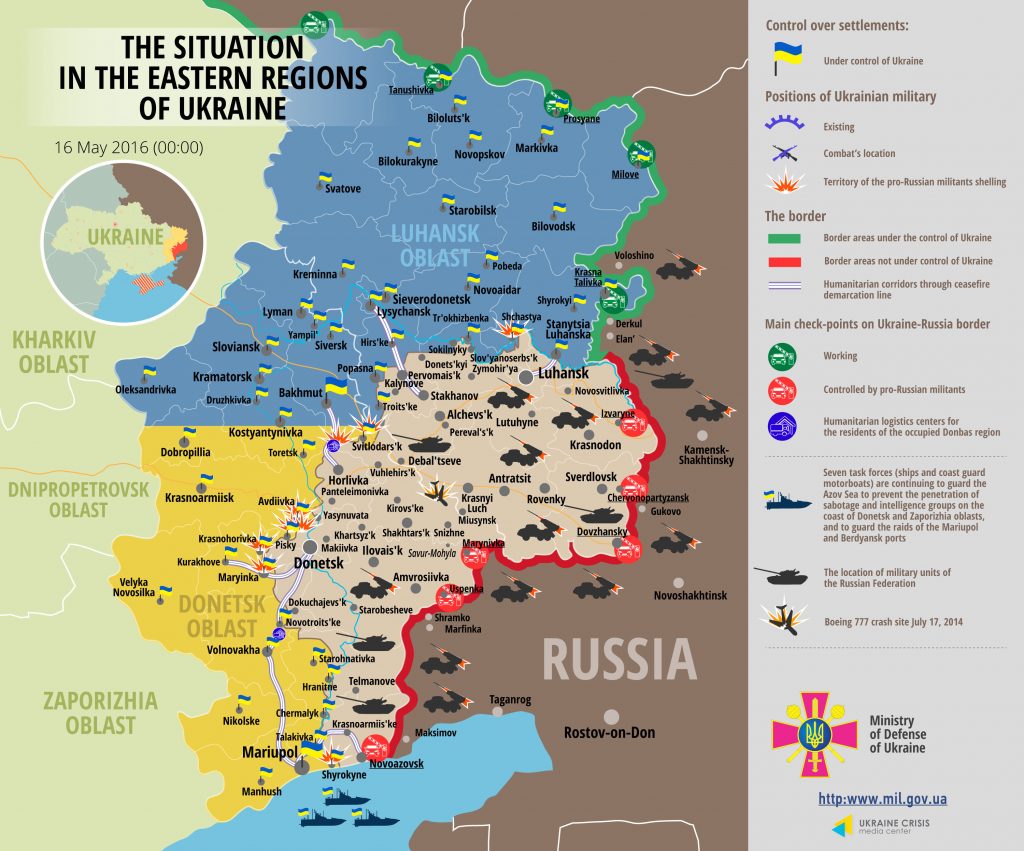 In Mariupol sector, militants also carried out 18 attacks, 3 of which  – with a mortar over the past day. “The enemy is firing in three locations – in Krasnohorivka, Maryinka and Shyrokyne; it is quiet on other fronts sectors,”noted the Presidential Administration spokesperson on ATO related issues. In Luhansk sector the militants once violated the cease-fire in Shchastya.

“Over the past day of hostilities, one Ukrainian serviceman was killed and one wounded. It happened in Donetsk sector,” informed Andriy Lysenko. According to available information, six soldiers of the so-called “separate 3rd motorized rifle brigade” and “11th separate motorized rifle regiment of the 1st army corps of the DPR” were wounded.  Besides, two civilians were wounded. A man from Novhorodske was wounded in explosive device blast in his yard; a resident of Avdiyivka was wounded as a result of mortar attack by illegal armed groups. “Currently, he is in a local hospital,” noted Colonel Lysenko.

According to the Defence Intelligence of Ukraine, the military command of the Russian Federation and representatives of the self proclaimed “Luhansk People’s Republic” (“LPR”) held a closed- door meeting in Luhansk. “During the meeting they discussed plans for expansion of the militant-controlled territory towards the Stanytsya Luhanska and Shchastya. The information about the plans for intensification of hostilities from May 18 is spread among the local population and militants who are on the forefront near the village of Vesela Hora,” noted Colonel Lysenko. Intelligence also reports that yesterday 9 tanks with diesel fuel for the purposes of illegal armed groups arrived at the station in Makiyivka.

On checkpoint “Stanytsya Luhanska” the Ukrainian border guards detained a militant. “The detainee is a member to the so-called “Vsevyelikoye Voisko Donskoye” – one of the groups that operate illegally in Luhansk region,” explained the Presidential Administration spokesperson on ATO related issues.