A minor tortured by the militants is explains why they held him captive, Ukraine will proceed with investigation of this case at the international level. Adversary is less active in “usual areas”.

Kyiv, May 25, 2016. Ukraine’ intelligence service learned that militants captured a 15-year-old resident of Novoaidar district, interrogated and tortured him. “The incident happened mid-May. The boy was tortured, trying to extract information on location of Ukrainian troops near Triokhizbenka village. The boy said these were Russian mercenaries from North Caucasus under command of a militant with nom de guerre ‘Klim’, informed spokesman of Presidential Administration on ATO-related issues Colonel Andriy Lysenko at a press briefing at Ukraine Crisis Media Center. 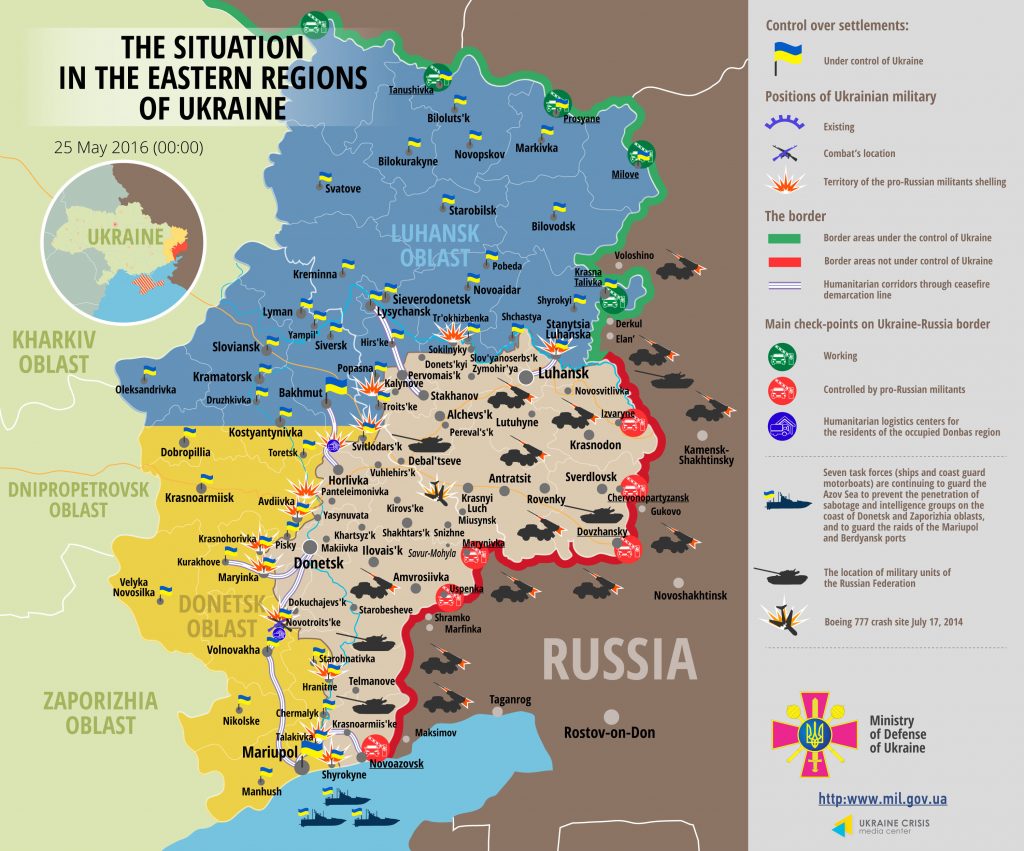 Col. Lysenko added that the boy’s name, surname and location remain confidential for the sake of his and his family’s safety. “His testimony has been taken and medical examination conducted. All the information for passing the case to international criminal court is being prepared, and they will surely get there,” added the spokesman.

Ukrainian Armed Forces incurred no losses in combat in the past 24 hours. Two troops were wounded near Avdiivka and two servicemen of the Armed Forces were captured. “It happened in the Donetsk sector. They are in Donetsk at present. Ukrainian authorities and military command are doing their best to liberate them,” said Col. Lysenko.

In the Donetsk sector 16 militants’ attacks took place in the past 24 hours, five of them involved use of heavy armor. “Militants were mostly active in the usual “flashpoints” – Luhanske, Zaitseve and Avdiivka,” added the spokesman. An intense attack took place after midnight near Krasnohorivka in the Mariupol sector. “Using mortar launchers and armored personnel carriers, occupants were shooting for almost 5 hours till dawn. Moreover, ATO troops successfully defeated at attack attempt from a subversive reconnaissance group near Novotroitske. The fight continued one hour, Ukrainian troops destroyed a hostile armored personnel carrier,” informed Col. Lysenko. Militants also violated the ceasefire near Mariinka, Hranitne and Shyrokyne. The total of 12 attacks and one firefight took place in 24 hours in the Mariupol sector.

Col. Lysenko also informed that officers of the Security Service of Ukraine detained a militant of self-proclaimed “Donetsk People’s Republic” (“DPR”) in Toretsk.  The man is reported to have joined militants in April 2014. He actively participated in Toretsk occupation and kept watch at checkpoints carrying arms.