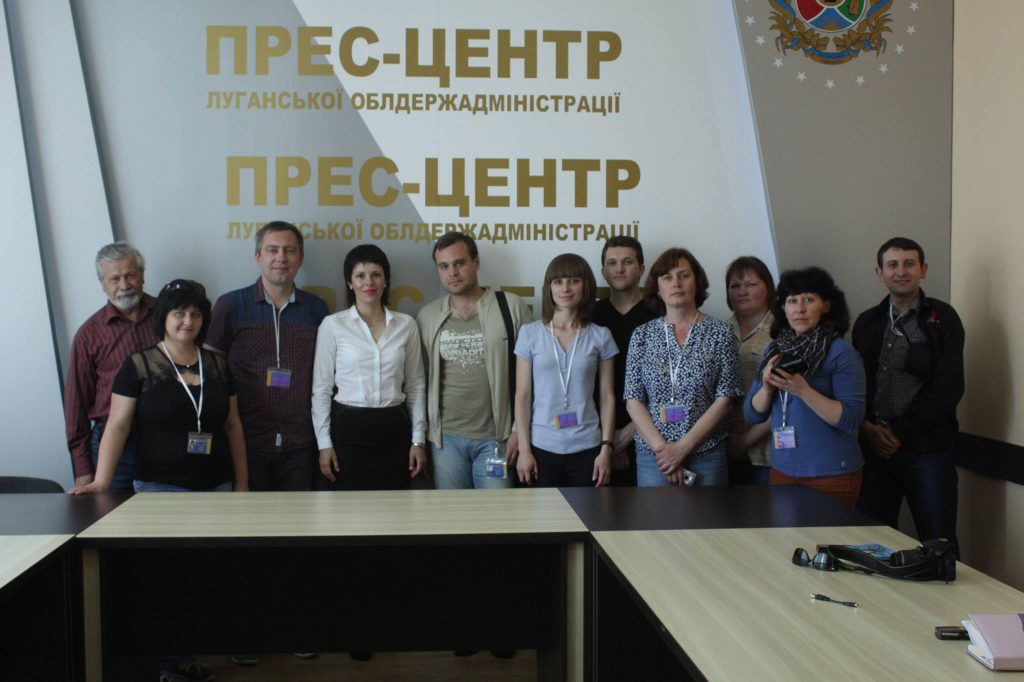 Volunteer Olena Rozvadovska, who had stayed in the region since the beginning of hostilities, accompanied the group of journalists during their visit to the “gray zone” – to Lysychansk, Popasna and Zolote, reinforcing the impression by telling real stories of people and towns. The journalists saw the abandoned houses, yards, buildings destroyed as a result of shelling, hospitals, schools, kindergartens. “In Popasna we were struck by the bomb-destroyed houses that cannot be restored, traces of attacks on houses and other buildings. You do not need to be a great expert to track the direction of these attacks,” shared her experiences Natalia Belinska, editor of the regional newspaper “Kryvoozerschyna”. Yuriy Onyshchenko, Popasna Mayor, and Roman Vlasenko, Head of the district administration, spoke about activities of the government, civil and donor organizations in rebuilding the town and the district.

During a meeting in Severodonetsk, Olga Lishyk, Deputy Head of Luhansk regional military-civilian administration, described the latest statistics on internally displaced persosn, the data on restoring houses and infrastructure in the town.

Mykolayiv media attended a briefing with Luhansk police leadership at Crisis Media Center “Siversky Donets”. The journalists were informed about the planned launch of patrol police in Severodonetsk, Rubizhne and Lysychansk.

The purpose of the press tour to Luhansk region is to facilitate reconciliation and consolidation of civil society, personal familiarization with the results of hostilities in eastern Ukraine.

The press tour was the fourth event of the joint Ukrainian-Polish project aimed at strengthening the potential of local print media in Mykolayiv region. In Ukraine, the project is implemented by Ukraine Crisis Media Center (Kyiv) through the regional coordinator in Mykolayiv. In Poland, the project is carried out by the East European Democratic Center (Warsaw).