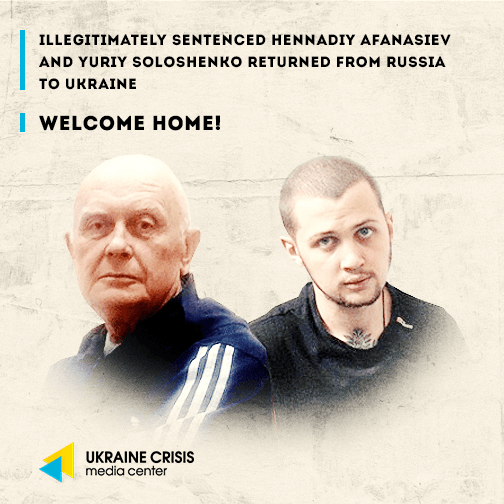 Ukrainian citizens Afanasiev and Soloshenko released on June 14 gave their first interview after imprisonment, telling Ukrainska Pravda journalists about tortures and abuse they had to suffer in Russia

UCMC is publishing an excerpt of the interview in English.

Afanasiev was born in November 1990 in Simferopol. He graduated from Tavria National University with a degree in law and worked as a photographer.  When Russia annexed Crimea, Hennadiy was helping Ukrainian troops located on the peninsula and participated in acts of protest. He was only 23 in 2014 when he got arrested. Now Hennadiy is 25 and he is telling the journalists his story.

How he was arrested. “I walked on Victory Day Parade in Simferopol carrying a photo of my great-grandfather. After that I went to visit a girl I knew who lived nearby, in the city centre. However, as I was going along the road, some guys in civilian clothes with assault rifles rounded upon me and shoved me into a car”.

How and what he was made to “confess”. “They were talking to me and threatening me at first and I said nothing. They only beat me on the first day. Then I was taken upstairs to the second floor where special people and investigator sat. I was asked different questions again. When they understood I knew no facts they were interested in, they started demanding that I should give evidence against myself. I had to confess I wanted to blast the Eternal Light monument during the May 9 Parade. This is absurd, for I myself was among the people marching towards the monument. It’s were they detained me, a great many people saw it. On the second floor they put on boxing gloves and punched me on the head, to avoid bruising me. Then serious torture began. They put a gas mask on my head, opened lower valve and sprayed some substance inside the mask. It caused vomiting and I started choking with my own puke, for I was wearing a gas mask. When you start suffocating, they take off the mask, use smelling salts on you and start over.

They continued by connecting electric wire to the genitals and striking by electricity. If it was possible to endure the suffocation, this was absolutely new level of pain. It was the way they made people sign documents. Just put their signatures, and that was it. I understood what was there. I could see what was written. I didn’t write it myself, everything had been prepared in advance, the entire evidence.

In the end, when they demanded to make an agreement with us, I was stripped naked and laid on the floor. Some people were holding me, passing a soldering tool along my body, telling me what would happen when this tool would touch me. The most important thing – I have a mother and they threatened to get her. It worked… I am blaming and punishing myself now for not being stronger. I recanted by statement, but… I signed the documents (evidence against Sentsov and Kolchenko) and was transported to Moscow. Using the same threats, they made me appear on TV and say what they needed. I remember what they were doing to me these last days and I didn’t believe anyone could protect me and not let it happen again. So I just said what they wanted me to say”.

How Afanasiev withdrew his testimony against Sentsov and Kolchenko

“My heart was in turmoil for the first twelve or eighteen months, because I gave testimony against innocent people. I kept quiet until their trial, because I believed if I betray myself, they will not let me appear in court at all.

I wanted my speech  in court to be unexpected. I waited. I already decided that was it and everything was over. I wrote letters to all my friends and my mother, asking their forgiveness for all my sins – I went to the trial”.

What was his punishment for withdrawing the testimony against Sentsov and Kolchenko   “Russians fulfilled their promise. They took me to the present-day Gulag in the Komi Republic, the only penal colony of this type in Russia. It was not even a colony, but a rough barrack. I won’t be able to describe it, for people who weren’t there can’t understand it.

The transportation itself was severe, the outside temperature rose to 40-45⁰C and railway cars were so hot that they needed to be cooled by a fire-engine. There is neither water nor toilets. These are usual conditions for a Russian prisoner. It’s the way they live, like animals; it’s the only way to put it.

“It’s a huge barrack with iron bars 1-1.5 meters from the walls, and the guard is going to and from. It’s like a zoo cage, there are people around and they can see you. There are 100 prisoners per 150 square meters. There is no place to sit, lying is prohibited, everything is prohibited. It’s the first barrack of reinforced regime in entire Russia. Nevertheless, I was complaining of the conditions, I was complaining all the time. You know, after I appeared in court and said that Kolchenko and Sentsov were innocent, something changed inside me and I was not afraid anymore”.

Soloshenko comes from Poltava region. He is a graduate of Kharkiv National University and worked at “Znamia” defense plant for 48 years. Yuriy retired in 2010, but despite the fact that the plant was closed down he used his acquaintances to held Kyiv and Moscow trade special equipment. He is married snd has one son. Yuriy was arrested when he was 72, and he turned 74 now.

How he was arrested. Yuriy Soloshenko was detained in Moscow in August 2014 when he came to the city for one day for a business meeting. He was accused of espionage.

“A lieutenant colonel comes running to me, pushing me against a wall, my hands on the wall and feet shoulder width apart. I don’t understand what is happening. They searched me, took two mobile telephones, put them in a plastic bag and gave them to me. “Here, take your phones”. I saw there were some papers inside the bag. I said: “It’s not mine”. – “No, it’s yours. You had it on you”.

It turned out they prepared some seemingly classified documents and said I came to Russia to steal them. Those telephones with documents they shoved in were the only “proof”. There were no fingerprints of mine on those papers, I didn’t read them and I still don’t know what they contained. I took no interest in them whatsoever”.

How the trial took place.  “As soon as my lawyer received the money, he said: “There are two options. If you plead guilty, you’ll get minimum prison term, 10 years. If you don’t, you’ll get 20 years”. I told him: “Look at me. Do you think it matters for me whether it’s 10 years or 20? Of course I won’t plead guilty”. Altogether, I was 10 months without a lawyer and 8 months without the consul”.

“I was tried in closed judicial session, no one was admitted, neither television, nor the consul. I spoke to defend myself during the third session and the judge was listening to me. Nevertheless, the sentence read that “the judge treated the defendant’s words critically”. Judgment was pronounced on the 14th. Everyone was admitted to that session, both legal advocates and the consul.

Punishment. “A letter came – to execute a sentence and transport me to the place of serving the punishment. I was in hospital of “Matrosskaia tishyna” prison at that time.

So the put me in a detention place and convoyed to a penal colony.

“…Those were railway cars of Stolypin’s times. It looks like a usual car, a corridor with compartments, but there are bars everywhere. There are no windows in compartments. Three berths on each side, 12 people in a compartment and all of them are smoking. I asked the convoy: “If fire starts in a compartment, will you open the bars to let us out?” He said: “No, I won’t. It’s simpler to write you off than to report that you escaped”.

Before the colony I was admitted to remand prison hospital in Nizhniy Novgorod for two weeks and then they planned to convoy me. When I was really sick, they put me in regional prison hospital on the territory of the 5th colony. I spent ten weeks there and then was transferred to colony”.

“They didn’t beat me, only tried to break me morally. I had nothing to lose… Of course I wanted to see my grandchildren”.

“You can’t count on any humanism in Russia. This monster, Russia, has one authority, the sole ruler of all Russia and his life-guardsmen from the Federal Security Service”.