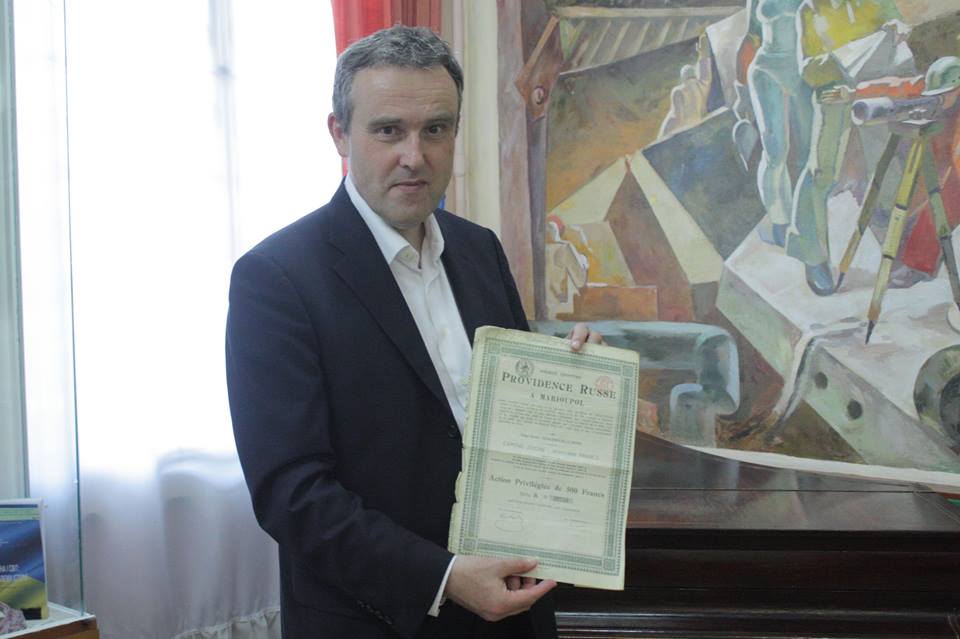 On June 17, the exhibition on Belgian investment into industrial capacities of eastern Ukraine in late XIX – early XX century opened in Mariupol, Donetsk region. The exhibition entitled “Foreign investment in Ukraine at the end of XIX century – beginning of XX century. Part one: Belgium” is hosted by the city’s regional history museum. It consists of a series of posters showcasing shares and bonds of Belgian companies – investors in Ukraine’s economy at that time, archive documents, photos of the plants, workers and of their daily routines. Belgian investments reached the territory of Ukraine’s actual Dnipropetrovsk, Zaporizhzhia, Donetsk, Luhansk and Odesa regions. Over 80 Belgian factories were active in the area at the turn of the century.

Cover photo: H.E. Luc  Jacobs, Ambassador of Belgium to Ukraine with a share of “Providance” plant founded by a Belgian company in Mariupol in late XIX century

The exhibition is based on the collection of the Ukrainian, a patron of arts, Dmytro Pirkl. Materials that he managed to collect were then passed to the Dmytro Yavornytskyi Dnipro National History Museum. The current exhibition is organized by Ukraine Crisis Media Center (UCMC) and supported by the Embassy of Belgium in Ukraine and two Belgian companies: SESVanderHave and Hlyny Donbasu. 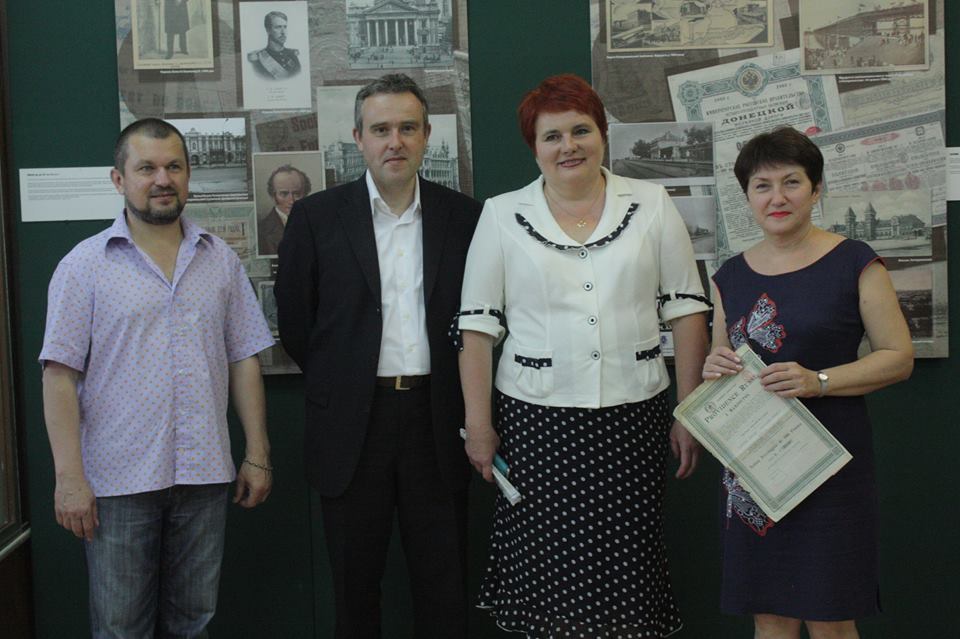 Among Mariupol’s industrial enterprises there is one, the history of which has close ties to Belgian investment. The Ilyich Steel and Iron Works currently privately owned by a Ukrainian company has a history dating back to the late 19th century. It originated from the merger of two factories both initially having Belgian shares in their capital. They are SA Providence Russe constructed in 1898 by Belgian entrepreneurs and Nikopol, initially a U.S.-founded factory that received Belgian stakeholders at a later stage. 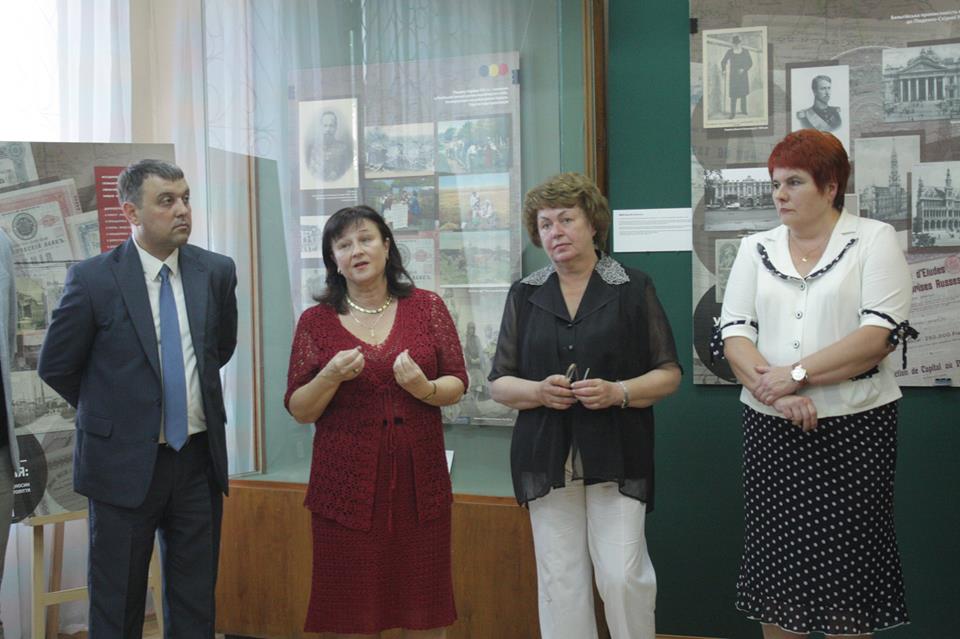 Foreign investment in Ukraine is an under-researched topic, noted Nadiya Kapustina, Director of the Dmytro Yavornytskyi Dnipropetrovsk national historic museum and Valentyna Lazebnyk, Head of the Museum’s department on Ukraine’s history of the 19th – beginning of the 20th centuries, speaking at the opening of the exhibition. During the Soviet era, this aspect of Ukrainian history was being silenced while the emphasis was made on the significance of Soviet industrialization, the museum personnel say.

Common history shared between Belgium and Ukraine in this endeavor is not something to be left in the past. It is natural that the countries now rediscover their common heritage and think of the new ways to cooperate, emphasized H.E. Luc Jacobs, Ambassador of Belgium to Ukraine at the opening of the exhibition. 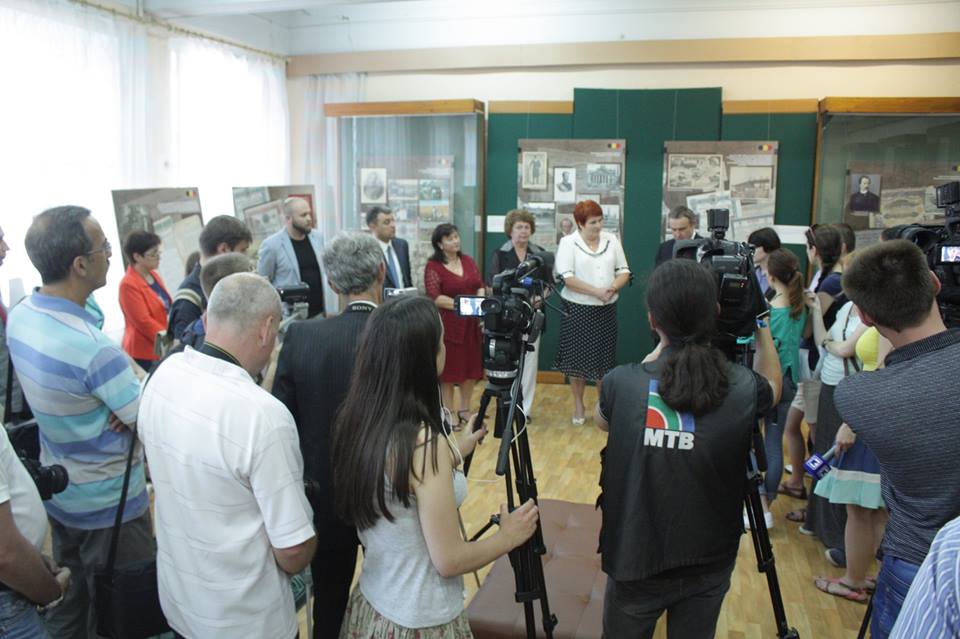 Opening of the exhibition “Foreign investment in Ukraine at the end of XIX century – beginning of XX century. Part one: Belgium” in Mariupol Regional History Museum

During his visit to Mariupol, Ambassador Jacobs also met city authorities and civil society representatives. The meeting with civil society was held in the newly opened “TYu” artistic space. Civic activists, whose area of activity varies from environmental protection to advocating the rights of the disabled, voiced some the daunting problems their city faces and expressed interest in Ukraine’s perception by the Belgian people.

At the meeting with the Belgian Ambassador, Secretary of the City Council Stepan Makhsma mentioned that Mariupol is now creating its city investment passport and is working to attract investors. Ambassador Jacobs noted that Belgium has experienced a conversion in its industrial capabilities, and it is a “European champion” in waste management with 90 percent of its waste being collected separately and recycled. Both practices could happily be shared. 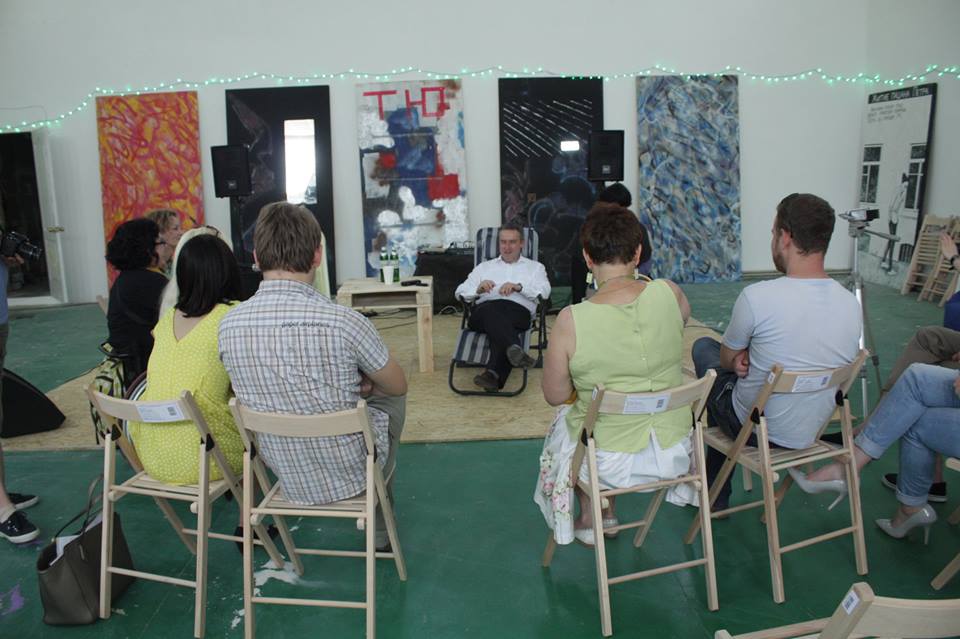 Meeting with civic activists in the “TYu” artistic space

The exhibition “Foreign investment in Ukraine at the end of XIX century – beginning of XX century. Part one: Belgium” is open at the Mariupol Regional History Museum until June 26. It has already traveled to Lysychansk and Severodonetsk of the Luhansk region as well as to Kramatorsk in the Donetsk region. The exhibition is on tour and will visit three more cities of the Donetsk region: Druzhkivka, Kostyantynivka and Sloviansk in June and July. Follow UCMC’s announcements for further details.