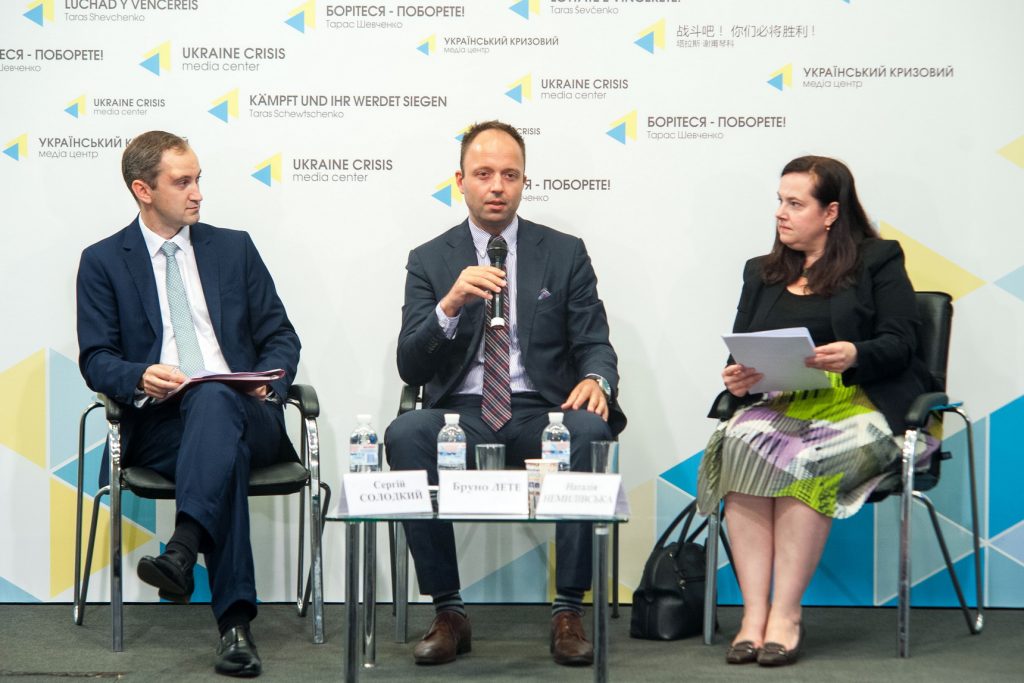 Kyiv, July 6, 2016. NATO Summit in Warsaw starts on July 8. The expert community has prepared recommendations for the future cooperation between Ukraine and the Alliance, informed Sergiy Solodkyi, First Deputy Director of the Institute for World Policy, at a discussion at Ukraine Crisis Media Center. Bruno Lete, expert of the German Marshall Fund (Brussels), focused on three key aspects of cooperation: communicate initiative, emphasize mutual benefits of Ukraine-NATO cooperation and carefully examine the military potential in the Black Sea region.

Initiative instead of expectations

Lete told proper communication is vital, “Today, Ukraine’s narrative is centered on the expectations too much. It is based on the Bucharest Summit Declaration of 2008, while political reality has fundamentally changed. We suggest focusing on communicating achievements. This directly links to the successful transformation of the country that has already made a big step in implementing reforms. This kind of communication will help fight disinformation and negative perception of Ukraine,” believes Lete. Additionally, he suggested that Ukrainian authorities should coordinate and communicate a singular most important message from Ukraine.

Ukraine needs to build up communication with the Alliance properly, stressed Nataliya Nemylivska, director of the NATO Information and Documentation Center. “It is important to tell NATO partner countries what are we doing and ask them about their expectations from us,” stated Nemylivska. “You have to think globally and not limit yourself to the Bucharest Summit Declaration. Yes, it is an important document that sets your diplomatic goals but this doesn’t have to be your only base. Ukraine has to think more strategically and communicate its hopes and ambitions toward NATO in a more nuanced way,” added Lete.

Bruno Lete believes that Ukraine has to think what it can offer NATO and not the other way around; hence demonstrating Ukraine’s added value for its membership bid. In Lete’s opinion,Ukraine’s unique selling points might be the Air Force and experience of fighting the hybrid war. “Ukraine is perhaps the only country in the world today that fights the hybrid war against one of the strongest countries in the world. There is everything: disinformation, propaganda, social media, traditional media, rebels, business and political influence. Ukraine has a unique experience in these spheres,” noted Lete. He also added that it might be a good idea to establish a Center that would take care of the strategy and hybrid war doctrine. This Center should engage private partners who have extensive experience in the area.

Prospects for cooperation in the Black Sea region

Lete highlighted the importance of closer cooperation with the neighbor countries and NATO member states in the Black Sea region. Potentially, a joint Ukrainian, Romanian and Bulgarian fleet could be successful. Mr. Lete noted that even though Bulgaria has turned down this idea, it is too early to give up on it. He also advised to intensify cooperation with Georgia.

Bruno Lete noted that NATO is now revising its plan in the Black Sea region. Originally it intended fast response to emerging threats. Yet the Russian militarization of Crimea forced NATO to ensure its presence in the region.

Ukraine must strengthen cooperation with the NATO member states in the non-military sphere too, as it is accounts for 2/3 of cooperation with the Alliance, said Ievgen Marchuk, Ukrainian Army general and the former Prime Minister of Ukraine. He explained that focus on the military without engagement of civilian ministries does not tell much to NATO leaders about the events in Ukraine. He also expressed discontent over the absence of the Permanent Representative of Ukraine to NATO for more than a year. “In the language of diplomacy, it sends a particular signal to Brussels,” Marchuk concluded.

Also on this topic: