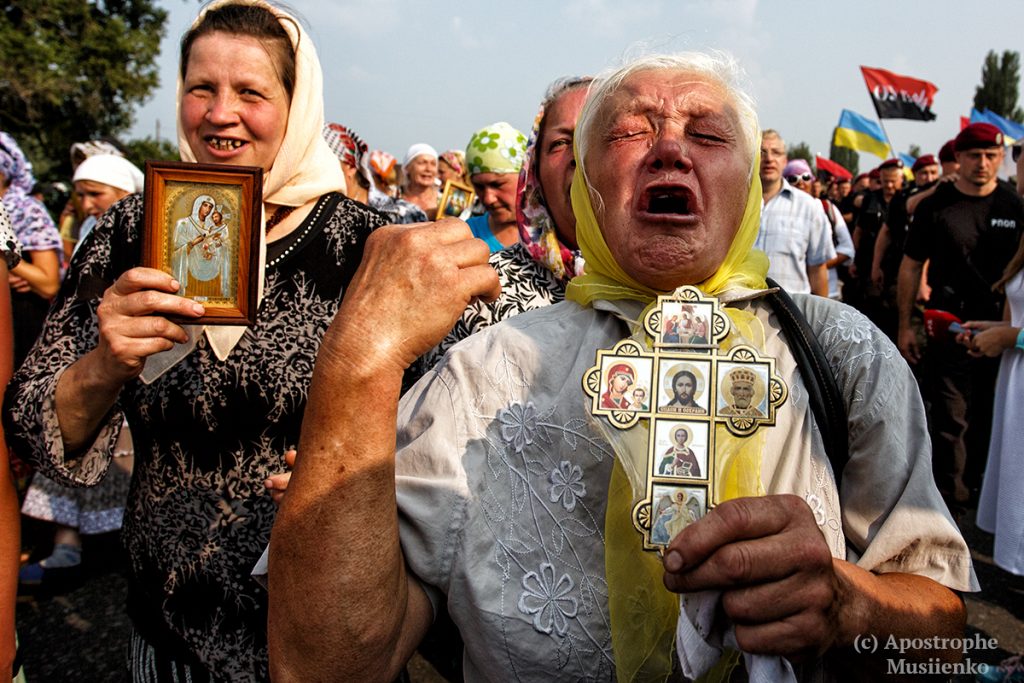 For the past two weeks, the religious procession organized by the Orthodox Church of the Moscow Patriarchate march on in Ukraine. Believers are divided into two parts: the Lavra Potchaїvsk in western Ukraine and the Lavra Svyatogirsk in eastern Ukraine. They planned to meet on July 27 in Kiev to walk together towards Kiev to attend the festive masses that will take place the following day.

Ukrainska Pravda journalist, Anastasia Ringis, tried to find out the reasons behind this procession and who needed an event that has all the chances to enhance the split not only among the believers but also provoke radical Ukrainians for aggression.

Full version of the article is available on the website of Ukrainska Pravda in Russian language. UCMC offers a shorter version of this article translated into English below.

On July 27, 2016, the two religious processions, which started in both the West and East of the country, were meant to meet at the Volodymyr Hill in Kyiv. There, Primate Onufriy of the Ukrainian Orthodox Church of the Moscow Patriarchate would hold a prayer for peace on the occasion of the Christianization of the Kyiv Rus.

Representatives from the Ukrainian Orthodox Church of the Moscow Patriarchate released hardly any comments on the prayer those days.

Yet, one of the sources of the Ukraisnka Pravda close to synod of this church explained that lately the Moscow Patriarchate feels itself on the outskirts of Ukraine’s religious life.

“The goal of the prayer is good, we simply want to pray together for peace with perishes in Ukraine,” commented the source.

According to him, the idea of prayer for peace appeared inside the church and was actively supported outside of it.

Unsurprisingly, its position often supports or duplicates the position of the Russian Orthodox Church. The Ukrainian Orthodox Church of the Moscow Patriarchate often condemned the protests at Maidan, the war, and the acting government. Certain priests of this patriarchate in the East Ukraine would even express support for the pro-Russian militants.

For instance, the city of Sloviansk still remembers Father Vitaliy from the Svyato-Voskresenskyi cathedral who hosted a group lead by the militant leader of the self proclaimed “Donetsk People’s Republic” (“DPR”), Igor Strelkov, in the center of Slavonic culture. It was also Father Vitaliy who organized a group of women with religious icons to block Ukrainian soldiers.  In addition, he would travel in between Ukrainian checkpoints and curse the military there.

Igor Semyvolos, religious scholar and director of Center for Middle Eastern studies, considers that the so-called “Russkyi Mir” (Russian world – eng.) on the territory of Ukraine has been undermined and the only pillar for it now is the church.

Semyvolos is certain that the Moscow patriarchate perceives the prayer as mobilization. The main message of which is “don’t touch us, we have the resources”.

Reason 3. Mobilization of electorate of the Opposition Bloc

Sources of Ukrainska Pravda name Vadym Novynskyi, Member of the Parliament from the Opposition Bloc, who is also senior partner of Ukraine’s richest man Rinat Akhmetov (owner of “Smart Group” and “Smart Holding”), one of the key sponsors of this religious procession. It was Novynski who, over the past couple of weeks, was talking the most about protecting the believers, stressing the need for the prayer for peace.

Political consultant Sergiy Gaidai calls this prayer a political action and recalls that that the former Party of Regions would use the believers like coal miners in situations when they needed to talk to authorities.

He names the religious action – a “sort demonstration of power,” which was very well planned.  Gaidai is certain that provocations were not beneficial to the organizers. Therefore, according to him, mobilization of the “pro-Russian forces” would not get any clashes.

Social psychologist Oleg Pokalchuk also closely followed the two perishes procession over the past few weeks and how they were treated in different regions. Pokalchuk considers that the Ukrainian society has realized the ways others try to manipulate them.

Despite the statements by the organizers of the religious procession that Ukrainians gladly hosted them, in a number of cities civic activists did not let the procession in the city centers.

For instance, in Boryspil (suburb of Kyiv), the believers were met with a question: “If you pray for peace, why are you not going to Moscow?”

According to Pokalchuk, the prayer is a good test for maturity of the society as well as professionalism test for security authorities.

The society has matured and is now ready to recognize manipulation.