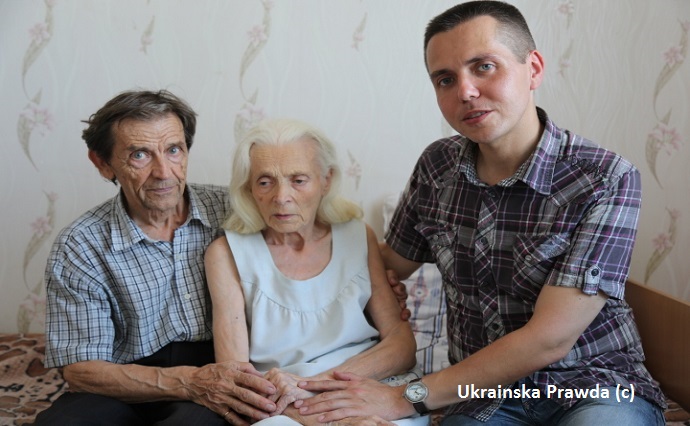 It was Yuriy Ilchenko, former Crimean political prisoner, who fled the occupied Crimea. UCMC publishes a short version of the article from Ukrainska Pravda that describes tortures and violent treatment in the Russian pre-trial prison.

On July 2, 2015, Ilchenko was detained by the Russian authorities and thrown into the Simferopol pre-trial prison for 11 months. Ilchenko was accused that in his blog and social networks he spoke sharply about the Russian annexation of Crimea and the war that Russia wages in the east of Ukraine.

In June of 2016, he was transferred to house arrest, but managed to escape and reach mainland Ukraine.

In March 2014 after annexation of Crimea the Ilchenko family rejected a Russian passport. Yuri ran his own language courses in Sevastopol, teaching more than 10 languages ​​(including Ukrainian, Crimean Tatar, Turkish, Polish, English, etc.), and almost all school subjects (there were courses of preparation for school, preparation for Independent external high school testing where we employed university teachers).

Yuri was a civil activist and supported in in his blog and social networks. In particular he created petitions to recognize the Mejlis as the only legal authority in Crimea and in favor of complete blockade of Crimea and punishment of traitors, etc.

On August 25, 2014, people from the Federal Security Service of the Russian Federation (FSB) and the Centre for Combating Extremism (CCE) came to his office and held a “preventive talk” about “the inadmissibility of conducting extremist activity.”

They told him that he had been charged with Article 282 (inciting ethnic hatred) for the anti-Russian publication on the Internet and showed a search warrant.

After the search, Yuri was interrogated in the Sevastopol Temporary detention center and threatened with imprisonment for about 10-20 years somewhere in Magadan.

Yet if he cooperates with the investigation his term could have been shortened. For this, he had to sign a “confession”, a cooperation agreement, to tell all about his activities and sign another stack of papers stating that he was a “coordinator” of the “Right Sector” (far-right Ukrainian nationalist political party – UCMC note) in Sevastopol, but rather around Crimea” or wanted to blow up monuments to Lenin, etc.

Yuri refused to cooperate with the investigation. Later he was charged with public calls for extremist activity.

Yuri Ilchenko stayed in the Sevastopol temporary detention center and in Simferopol pre-trial prison from July 2, 2015 to June 2, 2016.

Relations between cellmates and prison staff
In prison, Ilchenko would constantly get beaten up. His cellmates were promised a shorter term of imprisonment or early release for doing so.

Additionally, they kept persuading him to take the Russian citizenship and collaborate with the FSB.

The attitude towards Yuri was the worst among all inmates who also threated to rape him. He was refused medical care, sometimes he had to wait months before he got called in for appointment with doctor.

Conditions of detention and torture
According to Yuri, “the cells were jam-packed. I did not even have my own sleeping place. We slept in turns. Sometimes we had to sleep on the floor.

Blankets were given after 10 months in prison. A cup, spoon and plate were given only 9 months after I “moved” in prison.

For several months I did not have an opportunity to get the necessary medication.

Around the clock we were forced to sleep in the bright light that was never switched off, and I slept on the top board-bed, so the light was at a distance of a few tens of centimeters from me. The TV worked constantly and loudly.

When I was almost fainting because of low blood pressure, security services officers pinched me and beat to bruises, saying that I was faking.

At a certain point I was taken to hospital, security services forced the doctor to write that it was malingering. Doctors made no tests during the medical and psychological check-up, although the conclusions of the examination stated that they did”.

Meeting relatives and other prisoners
Over 11 months stay in pre-trial prison Yuri had only one meeting with his parents. His communication with private lawyers was constantly hindered.

Punishment cell
“Conditions in the punishment cell were even worse. It was a basement full of rats. Once I was kept there for 5 days. They didn’t let me sleep from 6 am to 10 pm. There was no place to sit because at 6 am the board bed was removed and fixed to the wall. I had to walk or sit on the cold concrete floor during these 16 hours.

Medical treatment was not given. The doctor advised us to have a bath and change the bedding every day, but sometimes we did not take bath for 2.5 months, and the bedding was not changed for 3 months”.

Meals
“The food was so bad and had such a sickening smell that we refused to have breakfast and supper. We ate the first course for dinner only if we added some food brought from outside and boiled it. We had the second course, namely pasta that stuck together only twice a week, and it was considered a real holiday in jail. On other days, we were given inedible undercooked porridge.

Water was also of very poor quality. It had chlorine flavor, so we had to boil it.

Absurd restrictions were imposed on food brought from outside. For example, it was prohibited to bring granulated sugar, oil, and home-cooked food. Everything had to be purchased in the store. It was forbidden to bring eggs, fruit, vegetables, and meat products. Prohibition lasted for several months”.

Language discrimination
Yuri got beaten up for speaking Ukrainian and Crimean Tatar. They forced him to speak only Russian. It was forbidden to speak any foreign languages and to read books.

Trial and placing under house arrest
On June 2, 2016, the Russia occupational “Sevastopol City Court” transferred Yuri Ilchenko to a house arrest until June 25.

Yet there were the following restrictions: not to leave the apartment, not to use the telephone (neither fixed nor mobile), the Internet, not to communicate with anyone except my parents, particularly with the witnesses of his case. Yuri was also prohibited from sending or receiving any mail or telegrams. Even to communicate with his lawyer he needed a permit, although it was illegitimate.

First couple of days Yuri’s apartment was constantly watched by the security services. Then they fastened a special bracelet to his leg and installed some equipment to it in the apartment and video cameras in the yard of his house.

Preparing to escape
Policemen repeatedly hinted to me that although my house arrest expired on June 25, I can be re-arrested any day. I had a premonition that I would soon be re-arrested.

Escape
The policemen hinted Yuri a couple of times that he might be re-arrested.

He decided to run away at half past two in the morning of June11. He left the apartment wearing his parents’ clothes. After passing the surveillance cameras, he cut off the bracelet with the knives.

Yuri hitchhiked to Bakhchisarai and then called a taxi from someone’s phone to go to Simferopol bus station. With the next car he reached Armyansk.

Crossing the border
At the border he saw a field on one side and a kind of wall on the other with seemingly impenetrable thicket. He knew that there are mines and trip wires on both sides but he was ready to give up his life rather die than to be re-imprisoned in a Russian jail.

Yuri decided to climb the wall. Once he got off the wall, he saw a Russian soldier again. He ran away from him to the check-point on the Ukrainian side of the border. There Yuri told the Ukrainian border guards his entire story, showed the all the documents and they allowed him to enter Ukraine.

Arriving in Lviv
Yuri Ilchenko reached Mykolayiv and then Lviv. In Lviv he was provided with financial food, accommodation, medical rehabilitation and filing all the necessary documents.