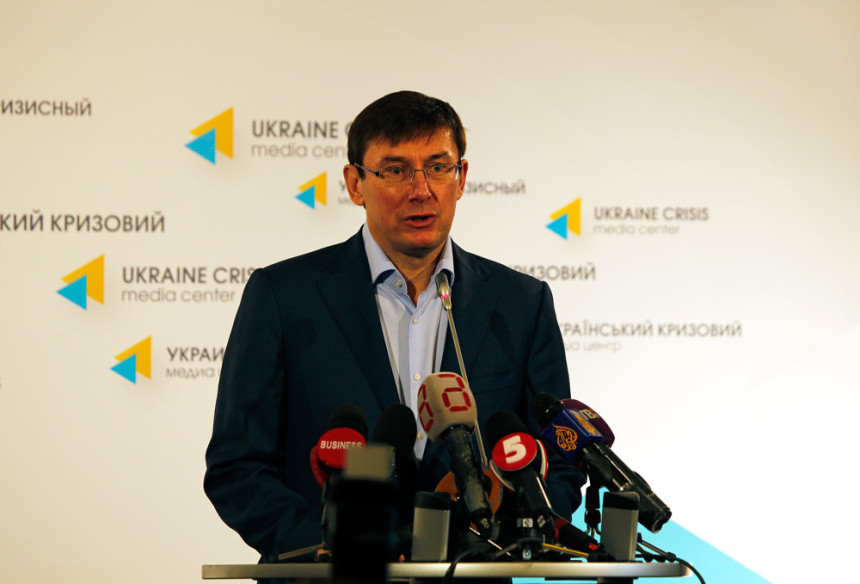 Appointing Yuri Lutsenko, as Prosecutor General of Ukraine, President Petro Poroshenko has made a precedent. However, civic society demanded open competition for this post after president’s protégé, Viktor Shokin, failed as Prosecutor General. The society wasn’t heard. Again. Moreover, the President suggested a person without the necessary education for this position. On May 12, 2016, a draft law specially tailored for this person on the post of Prosecutor General was adopted by the Ukrainian parliament in just four hours. These actions have evoked strong dissatisfaction among Ukrainians, as they greatly resemble the actions of the former ousted President.

While getting in the office, Yuri Lutsenko promised to “progress in the work of the Prosecutor General’s Office of Ukraine over the first 100 days”. On August 19, 2016, it will be exactly 100 days of Lutsenko as Prosecutor General.  Therefore, Ukraine Crisis Media Center (UCMC) decided to draw interim conclusions of his work and tried to understand if Lutsenko keeps to his promises.

The Heavenly Hundred case: Filigree standing on the same point

It has been now three years since the beginning of the investigation and trial on the shooting of Euromaidan activists.  The trial is back on the beginning stage. Presently, there are three more detained former soldiers of the riot police department “Berkut”. Overall, there are five former “Berkut” soldiers accused of shooting activists in February 2014. Uniting the criminal proceedings has brought the case back to the starting stage, but the prosecution started announcing the new version of the guilty act having finished all the legal procedures and questioning witnesses from all sides.

The highest rank of Prosecutor General’s Office is still out of reach for Ukrainian reforms. Commander of the “Berkut’s black company”, Dmytro Sadovnyk, fled Ukraine with literally no interference of Ukrainian law enforcement authorities. Ex-president Yanukovych is in Moscow, and is not going to return to Ukraine. The court allowed the defense to hold questioning over Skype yet this option doesn’t look real: putting all the legal details in order can take up to six months.

This is convenient for the accused former “Berkut” soldiers. Next year, the current jury finishes its term and if the process is not over by then, the new jury will be appointed. Therefore, they will start reviewing the case from the very beginning, which is beneficial for the accused. No one knows how political landscape will change.

The case with the activists killed in January 2014 is even worse. At the starting stage, the investigation chose a wrong way; thus, the trial is rather unlikely to identify and punish the guilty.

Undoubtedly, the most notable case of corruption that attracted the most public attention occurred in July of 2015 when it was discovered that the Deputy Chief of Investigations Department at the Prosecutor General’s Office, Volodymyr Shapakin and deputy prosecutor of the Kyiv Oblast, Oleksandr Koniets, took bribes. During the search of the prosecutors, the law enforcement officers found some USD 500.000, securities, weapons, and 65 diamonds, which gave the name for the case.

Former deputies of the Prosecutor General, Viktor Shonkin, Vitaliy Kasko and Davit Sakvarelidze made statements that their boss himself covered up the case of the “Diamond Prosecutor” with the help of his other deputies Yuri Stolyarchik and Yuri Sevruk.

On August 15, the court has again postponed the meeting on the case of the “Diamond Prosecutors” for another week.

“The whole brigade—Yuri Sevruk, Roman Govda, and Yuri Stolyarchuk—strangled the court case of the “Diamond Prosecutors” with the arms and legs of Shokin and continue to operate as they always have.  I don’t think that it’s all their personal initiatives, the question is above – Shokin and Konenko (member of the parliament from the Petro Poroshenko Bloc, who the former minister of Economy, Aivaras Abromavicius, accused of trying to appoint his own people in public companies),” said Vitaliy Kasko.

The new Prosecutor General immediately called for Yuri Sevruk and Roman Govda to leave the prosecution and for Yuri Stolyarchuk to display his objectivity and professionalism in the first 100 days.  However, only in a perfect world, this story could happen.

On July 6, Roman Govda was appointed as prosecutor of Kyiv city.  It is difficult to determine the motivation behind Lutsenko’s decision.  Govda became deputy prosecutor general in the investigation when his predecessor, Davit Sakvarlidze, became a bone in the throat of Shokin. Sakvarelidze was appointed to prosecutor general of the Odesa Oblast.  The biggest accomplishment of Govda, other than his participation in the case of the “Diamond Prosecutor,” is his criminal case on the theft of UAH 38 billion (close to 1.4 million EUR).

Yuri Sevruk also hasn’t left the system either.  After his release, he was appointed as vice rector at the Academy of Prosecution.  Did the prosecutor general really think that Sevurk would change while being inspired by delirious prosecution students?  Or would he strongly influence the minds of young people?

“Party of Regions” in the dock

Oleksandr Yefremov was a part of the first string of former “Regionals” (member of the Party of Regions) arrested. However, he was not a newcomer called in this since his first visit to jail was in July 2014. Then, against the former head of the “Party of Regions,” court proceedings were opened in regards to separatist activities. However, the famous Perchersky court of Kyiv found “no record of crime”.

This time around, Yefremov was arrested at the Kyiv Airport with a ticket to Vienna in his hand (surely going to visit his former colleague, Dmitry Firtash?) on July 30, 2016. Three charges were declared on Yefremov: separatism, misappropriation of public funds, and voting dictatorial laws (the package of laws taken on January 16, 2014, which limited the rights of citizens, the government then decided hand in punishment for those that don’t agree with its actions. Additionally, the vote on these laws was taken by show of hands and there was not accurate counting of votes taken).  After his arrest, Vitaliy Sabunin, Chairman of the Board at the “Anti-Corruption Action Center”, announced that in the Office of the Prosecutor General there is no evidence of this work other than the vote that took place on the January, 16.  On the August 6, a video was released on the site, where Yefremov discussed his new illegitimate power.  After his address to members of the parliament (MP), the regional council supported the referendum for the creation of the Luhansk People’s Republic (‘LPR’). All of this occurred with the tacit support of other MPs, the Governor of the oblast, and the Mayor of Luhansk.

For the last 60 days, Yefremov was held under arrest for charges that were rejected by the court.

Yefremov is also joined by another former “Regional,” Volodymyr Medyanyk.  Their stories also don’t really differ from each other’s: separatism, financing and creating the ‘Luhansk People’s Republic’, and also spending 60 days under arrest. The role of Medyanik is only more straightforward as he is nothing more than a statistician and a “hostage”. All that they want from him is to get evidence against Yefremov. The Prosecutor General doesn’t even try to hide this fact. Lutsenko already announced that Medyanyk “in this moment is playing a positive role for the Ukrainian Government.”

The top winners from the Office of the Prosecutor General should have closed in on Oleksandr Onyshchenko, but he had time to escape Ukraine and move to London. The National Anti-Corruption Bureau (NABU) and the Special Anti-corruption Prosecutor carried out an investigation of the office of state company ‘Ukrazvidohuyannya’, which is associated with Onyshchenko, which was followed by the initiation removing his parliament immunity and the arrest of Onyshchenko.  Former “Regions” threw embezzlement in the extraction along with the sale of natural gas for USD 1.6 billion. All of this occurred in June, 2016.

On July 5, the Ukrainian Parliament voted for the removal of diplomatic immunity and called for the arrest of Onyshchenko, but at the time, he had already escaped from Ukraine.  On the July 27, Yuri Lutsenko again signed the documents on suspicion of Onyshchenko before returning the documents to the NABU, citing their low quality and clarity.

At first, the deputy expressed his willingness and openness to take part in the investigation, but only with Great Britain, and then he filed a case with the NABU and the Prosecutor General’s Office, which later announced that Onyshchenko is wanted in Ukraine.  The Office is also expected to announce its Interpol international wanted list later as well.  The Prosecutor General’s Office isn’t excluding the fact that Onyshchenko may have fled to Russia, where his extradition back to Ukraine is impossible.  Additionally, Onyshchenko has already visited Russia in early July.

On May 12, the President and Parliament of Ukraine showed that in the name of political will (or banal wishes) are able to work together to make necessary decisions in a short period of time. However, the problem is that these decisions are questionable in respect to their representation of public interest.  Should this be the result that we have now? The cases of Heavenly Hundred Hero’s and the “Diamond Prosecutors” haven’t given new inspiration to Lutsenko and their previous support is not connected with the activities of the former prosecutor general. In the structure of the Office of the Prosecutor, there are untouchable people that are not strongly for the fight against corruption but rather wish to remain in the system to receive large sums of money. Taking note of the fact that they detained the leader of the “Party of Regions,” Yefremov, will most likely not be released. Although Lutsenko would have decided to work positively in the eyes of the public and although it may look as if the prosecutor general has taken steps in the right direction, we are left with one question: is it enough?