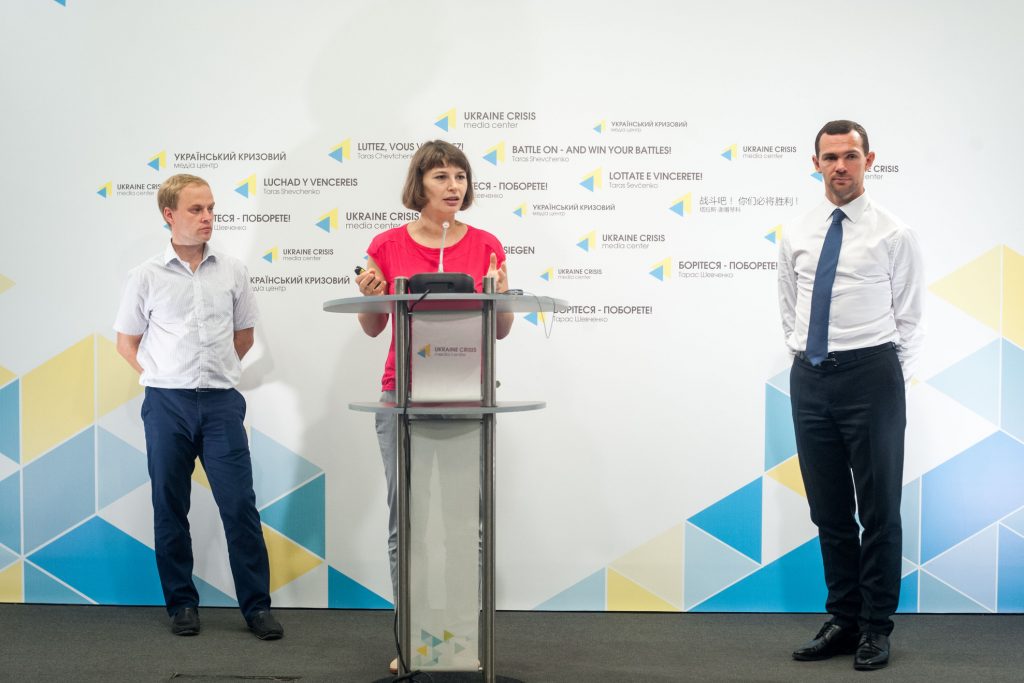 Activists explain the advantages of competetive procedure for the new government agency and explain its functions, stressing the imporance of it for the state.

Kyiv, August 22, 2016. Today the Commission, designed to select Head of the National Agency for the Investigation and Disposal of Assets obtained through corruption or other crimes (hereinafter – Agency) based on a competition, will determine which of the candidates fully meet the formal requirements and can proceed to the next stages of the competition – testing and interview. This was stated by commission members at a press briefing at Ukraine Crisis Media Center. The decision will be made at the session, open for media, which will start at 16:00 in the Government building in Kyiv.

As of today, there are submitted 20 applications. Among them are employees of government agencies, universities, private sector and the temporarily unemployed. “The number is sufficient to choose the best candidates. The very composition of the Commission, the impossibility for a few people to solve the problem, more attention to establishing the Agency against the background of discussions on the effectiveness of the NABU (National Anti-Corruption Bureau) and the NAZK (National Agency to Prevent Corruption), make it possible to choose the best of the best for the first time,” said Yaroslav Yurchyshyn, Secretary of the Commission, Executive Director of Transparency International Ukraine. He noted that to adopt a decision 6 out of 8 members of Commission votes are necessary, the probability of “pushing” solutions is minimal. The list of candidates has been published on the website of the Cabinet of Ministers, and more information about their biographies will be published soon.

The basic requirements for the candidates are – Ukraine citizenship, official language proficiency, clean criminal record and filing of income and expense declaration over the last year. “This is a person who is a lawyer, who has at least 5-year experience in the field of law and at least 3-year management experience,” noted Andriy Stelmaschuk, Head of the Commission, Managing Partner of the legal law firm “Vasil Kisil & Partners”.

Selected candidates will undergo electronic testing with a reliable surveillance system. “We will propose that not only the commission members be present at testing, but we are going to turn to the embassies with the proposal to send their observers,” said Yaroslav Yurchyshyn. Those who have enough points according to the test results will pass to the interview stage, then one or more best candidates will be chosen. The interviews will be broadcast online. The final decision is expected by September 16, 2016. After that, the candidates, who have permitted to process their personal data, will be directed for checking. Yaroslav Yurchyshyn stressed that the efficiency of law enforcement bodies would be especially important at this stage. “By the end of the year we do not only need the head, we must also start to form the National Agency. To do this quickly and efficiently, we need not only the government assistance, but also public attention, because only the processes that are under public control and supervision of international partners are likely to develop. […] In case of procrastinations on the grounds, we will understand that anti-corruption initiatives are blocked once again,” he emphasized.

The whole staff will have no more than 100 employees. “The law also provides for a guaranteed salary. It will be about UAH 30.000 for the Head of the Agency, a bit less for the deputies and about UAH 15.000 for ordinary workers,” said Daryna Kaleniuk, member of the Competition Commission, Executive Director of the Anticorruption Action Center. If the Agency woks efficiently, additional benefits are also possible.

Andriy Stelmaschuk also said that although the agency is subordinated to the Cabinet, there are tools that ensure its impartiality and independence. These include annual reports, external audit of management performed by foreign experts and public council with wide powers.

Commission members stressed that the launch of the Agency is absolutely urgent, because the current system of investigation and disposal of assets is extremely inefficient. “In 2015, it was expected to receive [to the Special fund of confiscated assets] 1.5 billion, but only 100.000 was received which is next to nothing. In 2016, 7.4 billion were included in the budget. As of April 1, 2016 UAH 77.400 were returned and over 6 months of 2016 – UAH 78.382. This shows absolute ineffectiveness of the current system of assets recovery,” said Daryna Kaleniuk. Andriy Stelmaschuk reminded that Yanukovych alone had stolen, according to different estimations, USD 30 to 100 billion. “If we imagine how much money is stolen from the budget even today, we can expect that the return of these funds will allow the state to significantly improve the financial situation. At least, we will be able to return the money we take from international financial institutions,” he said.

Commission members reminded that the Agency would deal with the investigation of assets obtained illegally in Ukraine and abroad, through a network of similar structures in Europe. The response to such a request will come in a few days, whereas under the current system it takes up to several months. Inside Ukraine, to get the necessary information, the investigators have to request 10-20 bodies now. Sometimes it takes months to get an answer. “We talked to investigators from various agencies on Yanukovych’s top cases and received a feedback about other state agencies’ sabotage,” noted Daryna Kaleniuk.

She reminded that the Agency is not a law enforcement body, but it will help law enforcement officials to search the sequestrated property. For this purpose, the Agency will have access to all state registries, both private and public. “If the investigator in another body is engaged in criminal proceedings and has a question which assets belong to a natural or legal person, they will address the Agency and it has to answer within three days,” said Ms. Kaleniuk. In order to process the information quickly, it is necessary to develop special software. The Agency will also create a single register to reflect the situation with all the arrested property. “It will be a single consolidated registry, which will collect the information with property description and details regarding judges and investigators who levied distraint,” explained Ms. Kaleniuk. If distraint is withdrawn, the information will also appear in the registry.

The Agency will also engage in disposal of arrested property, whose value exceeds 200 minimum wages. This will apply only to seizure of property with deprivation of the right to use it. As to arrested funds, they will be transferred to the Agency’s special deposit account in the state bank. If the court ultimately decides in favor of the owner – these funds, together with accrued interest, will become their property, otherwise – state property. The agency will also assess and pass to selling the property that loses value over time – if it there is a court decision. It will be assessed by independent experts before the sale, and the proceeds will go to the special deposit account until the court decision. The seized property worth more than 10.000 minimum wages will also be sold by the Agency through interdepartmental commission on asset sales.