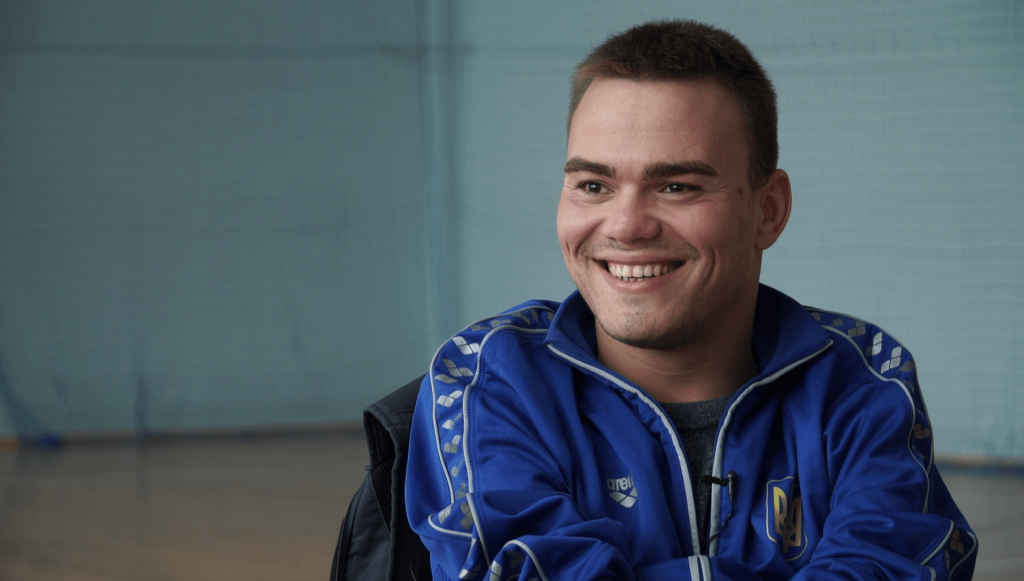 XV Summer Paralympic Games are taking place in Rio de Janeiro from 7 to 18 September. Ukraine’s 155 Paralympic athletes are competing in 14 kinds of sports.

Ukrainian Paralympic swimmer Anton Kol has won a silver medal at the IPC Athletics World Championship and a bronze medal at the IPC Athletics European Championships. Anton has no family and moves in a wheelchair. Before departing to Rio de Janeiro, the 26-year old athlete talked to Hromadske TV and shared a story about his way from a construction engineer to an athlete, the daily obstacles he faces, his victories and dreams. UCMC publishes a translated shortened version of the interview.

Childhood and war
“My mom gave me up after my birth. I was staying in the maternity hospital until I turned four, then I was taken to an orphanage. Several years ago my friends were trying to find my mother, but because of the war it became uneasy to get the information. The Russian side refused to collaborate and that’s how everything ended up.”

“I am not particularly worried about the fact that they have not found her. People, who brought me up and were beside me, are much closer to me. I understand what mother is like but she is a complete alien to me.”

Swimming
“I first got into a swimming pool when I was 10. We were taken there in a group. Judging by the look on trainers’ faces I realized that I had no chances to succeed.

However, back then I got so inspired by swimming, and so much wanted to do! I realized – that’s it, it’s mine. I started swimming whenever I had a chance, when we happened to go to the river. I nearly drowned once. After that I was afraid to get into water for two months. But my desire to learn how to swim was stronger than that fear. Once my friends threw me into the water from a paddle boat and I swam. I wanted to live, so I swam out.

Then I was having hard times: I was transferred to another care home. In simple words it was a facility for disabled and elderly. These moments were not too pleasant.

Our state is built up in a way that if food and shelter is provided, it is as if these people need nothing more. Like cattle. It might be rude to say so, but that’s how it is.

After I got there step-by-step I started going to the pool and swimming. I had friends who were in the Paralympic movement, they gave me the phone number of a trainer. Swimming was helping me a lot at the most depressing moments, at times when it seemed that everything is lost and there is no life.”

Drawing and construction
“I was into drawing. And it even got to construction. I started making technical drawing and cost estimates. I graduated from an architecture university as a construction engineer. I was working in this industry for several years. In Dnipro there are several houses built based on my drawings, they are two-storied with an attic. And then suddenly I got fed-up. I started breeding fight dogs. That was fun.”

Abroad
“When I traveled abroad for the first time, I was excited about what I saw. It was a totally different world, everything is arranged in a different way. Unfortunately people are the same. However, they are kinder a bit. Living conditions are absolutely adequate there. Everything is convenient, you can access everything.

While in Ukraine most of the swimming pools are inaccessible for disabled. They are simply inaccessible. Stairs and narrow passages are everywhere. You can neither get down, nor approach them. It’s extremely complicated. If ramps are constructed, it is done formally. With the angle they have, they are not accessible even for walking on foot. It’s only over the past two years that I started spotting curb ramps on the roads and sidewalks. They started making ramps on street curbs. I did not see it before.”

Private life
“In Dnipro people often recognize me on the streets, in public transport, at shops. They say hello and thank me. It is very inspiring, these are the moments when you realize that someone is watching you, is your sports fan and supports you.

At the moment I am almost constantly at training camps. I try to spend all my free time with my girlfriend. Big thanks to her that she is tolerant to all my departures. When I come back we immediately go to the cinema or for a walk.”

Dreams
“My sports dream is surely the one all sportsmen have – to win gold at the Olympic Games. I guess each sportsman dreams about it. My non-sport one is to set up a family. Well, it’s going.

First of all you prove to yourself that you are not worse than the people who think that they have arms and legs and they can do whatever they want. It is so, but they do not appreciate it. It is different for us. We appreciate what the fate brings us. And I realize that it is a unique opportunity for personal fulfillment, to establish myself and to become someone.”