Militants continue shooting from mortar launchers, firing 80 mortar shells at our positions in the Donetsk sector. Militants use unmanned aerial vehicles for reconnaissance, while Russia continues supplying them with fuel and manpower.

Kyiv, September 10, 2016. The Security Service of Ukraine (SBU) together with police found five 125-mm hollow charge and high explosive shells near Svitlychne settlement in Luhansk region. Over one thousand cartridges, five RGD-5 grenades with fuses and five rounds for grenade machine gun were seized in the vicinity of Avdiivka, and two grenades and 500 g of TNT were confiscated from a Krasnohorivka inhabitant, said Colonel Andriy Lysenko, spokesman of the Ministry of Defense of Ukraine on ATO related issues at a press briefing at UkraineCrisis Media Center. 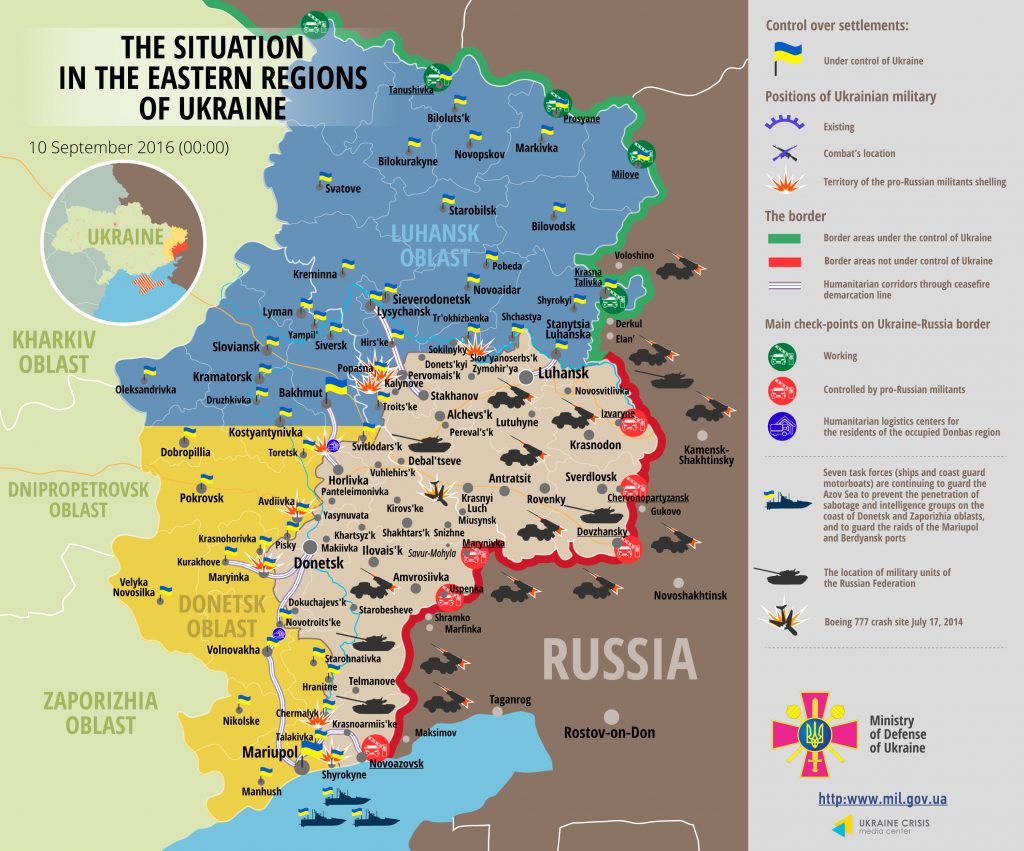 15 militants’ attacks took place in the Luhansk sector yesterday. Russia-backed militants were the most active in Novozvanivka, Novooleksandrivka and Popasna in the Popasna district. “The enemy conducted two shooting “sessions” – in the morning and at night, both in the daylight and during the hours of darkness. Moreover, occupants violated the ceasefire in Lopaskyne in the vicinity of Shchastia. The armistice held in other frontline areas,” elaborated the spokesman.

Five militants’ attack took place in the Donetsk sector. Major hostilities took place in the Avdiivka industrial area. The attacks were lengthy, but no heavy arms were used. Moreover, militants’ snipers were active near Maiorsk. “Ten hostile attacks took place in the Mariupol sector, and three of them involved use of heavy armor. Combat activities continued in Mariinka, Pavlopil and Shyrokyne. In Shyrokyne, like in several past days, the occupants are systematically using mortar launchers. 80 mortar shells were launched at our positions,” elaborated Col. Lysenko.

12 flights of militants’ unmanned aerial vehicles took place in the ATO zone in the past 24 hours. Three Ukrainian troops were killed in action and one was wounded. It happened near Mariinka during organizing firing position as a result of an explosive device going off. According to the spokesman, confirmed losses of Russia-backed militant groups on September 8-9 amounted to three militants dead and eight wounded. For instance, two Russian proxies were wounded in “friendly fire” and two more drowned during exercise together with their armored personnel carriers. These incidents took place in so-called 9th regiment of the Russian occupational troops. “Another batch of reinforcement came from Rusia for militants. Six fuel tanks with combustible and lubrication materials arrived at Rovenky station and four platforms with military equipment (two self-propelled artillery mounts, three armored personnel carriers and two trucks) and three fuel tanks with combustible and lubrication materials came to Khartsyzk station. 80 more occupants arrived at Antratsyt and three trucks with manpower came to Shcherbak village in Novoazovsk district,” summarized Col. Lysenko.