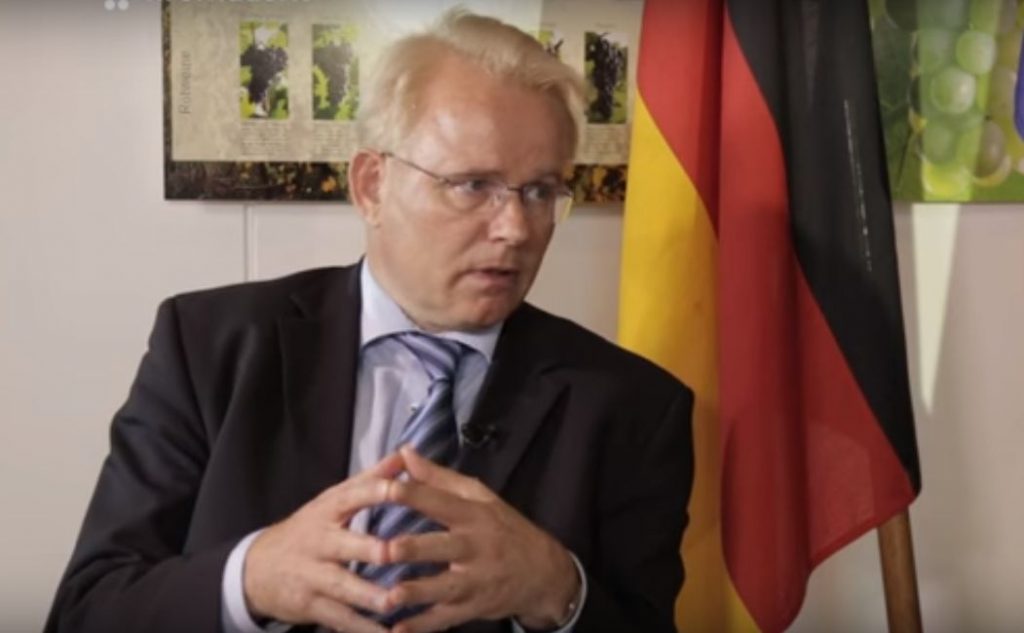 In his interview to Hromadske Regenbreht described the German Federal Government’s position on the key issues on the agenda in Ukraine: war, Russia, Minsk, reforms and visa-free regime. UCMC offers a short version of this interview.

There is no doubt that it is Russia that bears main responsibility for returning security to eastern Ukraine. The border remains open; Russian weapons continue to be delivered [to Ukraine]; we also know about Russia’s involvement in the development of the conflict in eastern Ukraine. So, this is the key thing. Germany and France use all our opportunities to influence Russia to stabilize the truce, to stop delivery of weapons to the region and to speed up withdrawal of weapons.

As President Poroshenko said in his address to Parliament, Russia continues to supply separatists with weapons. This delivery must be stopped.

The ceasefire can become sustainable only if weapons are withdrawn, and if disengagement of troops takes place. Now the armed groups are too close to each other, which poses a very high risk of ceasefire violation. Too much weapons are concentrated on both sides of the conflict.

According to the OSCE report, both Ukrainian side and Russia-backed separatists violate the ceasefire. The ceasefire can become sustainable only if weapons are withdrawn. Both sides must adhere to their part of the agreements.

About the current OSCE monitoring mission

Now the OSCE Special Monitoring Mission is working in the conflict zone. It is working well, provided that the parties give it the opportunity to carry out this work.

However, today separatists impose many restrictions on the OSCE access to the conflict zone. We should enable the OSCE to gain greater access [to these areas], in particular, to the border section between Ukraine and Russia for monitoring the situation

Police mission is on the discussion table at the moment. What is being deliberated between the OSCE countries in Vienna is a mission in support of local elections in the conflict zone [in Donbas]. The format and scope of this mission are being discussed now. But this is not a police mission in the strict sense of the word.

Reforms in Ukraine and Groysman’s government

Today Ukraine is under external threat. It is going through tough times. That is why the stabilization of Ukraine becomes even more important.

In our view, so far the Groysman’s government has made good work to keep up the reform process initiated by the previous government. Certainly, much more can be done, and we are afraid that the moment and the dynamics of these reforms are gradually being lost. However, we hope that the required legislative work will be intensified as the Verkhovna Rada plenary session begins, and more steps will be taken to implement the reforms.

Ukraine has made some progress in the judicial system reform and in establishing anti-corruption institutions. Here, in Ukraine, I had several meetings with representatives of the National Anti-Corruption Bureau of Ukraine and representatives of civil society. Both shared their very positive impressions about the progress achieved.

But more support is needed from the Government and the Prosecutor General’s Office. Sometimes it seems that these institutions are not working together and are not supporting each other. Sometimes they even seem to work against each other.

We also saw some problems in this area in late August. I hope that now these issues have been settled. Currently, the electronic tax declaration system is being certified; it should start its work to create conditions for public institutions and citizens of Ukraine to monitor whether these declarations are true. It will contribute much to the fight against corruption in Ukraine.

There is a document called Action Plan on Visa Liberalization (VLAP). This document has been negotiated and implemented. In December 2015, the European institutions, in particular, the European Commission accepted its implementation. So, Ukraine has taken the necessary preliminary steps so far. Certainly, we are looking forward to continue the intensive work in the fight against corruption.

Now the visa liberalization issue is on the agenda of the European institutions. The European Parliament is involved in this process. Besides, the EU Council, in particular, the EU ministers for justice and home affairs are also involved in this process. These institutions maintain a dialogue with the European Commission. The European Parliament has to approve certain legal documents on visa liberalization, and especially on the monitoring mechanism required in this context, because this process takes place on a background of migration challenges and refugee crisis in Europe.

According to Mr.Regenbreht, the process is within reach, but he cannot put a specific timeline on when exactly it will be completed. He thinks that the visa-free regime is quite achievable goal. And it will not take too long.

We believe that Ukraine is a very important country, and its territorial integrity and sovereignty are under serious threat. As a result, we all are also under threat. So, we have to be together and to continue the close cooperation with Ukraine.

We will continue to provide assistance to Ukraine and to be side by side with it. Today we are among the biggest donors – both in terms of humanitarian aid and in terms of assistance to the development  of economy, infrastructure and energy sector.

We also strengthen our economic ties. Today we see that a Russia’s share in the Ukraine’s trade balance in decreasing, while the European Union’s share is increasing. Germany occupies a very important place in this process.

In other words, together with our European and other international partners we will continue to provide assistance to Ukraine while closely following up on the reforms in Ukraine. As we have said very clearly, the increase in assistance depends on how Ukraine makes progress in reforms. The link between reforms and assistance is very important, and it is a key for close monitoring of Ukrainian processes and for strengthening a political dialogue.