Kyiv, September 20, 2016. “Decrease in number of militants’ armed provocations and absence of heavy armor use is observed in the Donetsk sector,” said Colonel Andriy Lysenko, spokesman of the Ministry  of Defense of Ukraine on ATO related issues at a press briefing at Ukraine Crisis Media Center. Russia-backed militant groups opened fire near Avdiivka, on the outskirts of Horlivka, near Maiorsk, Verkhniotoretske and Luhanske. “Another provocation took place near Novoselivka,” added the spokesman. It was only during the hours of darkness that militants launched one mine from 82-mm mortar launcher in the vicinity of Avdiivka. According to military intelligence, militants’ sniping detachment arrived to Yasynuvata. In total, militants violated the armistice 10 times in the Donetsk sector. 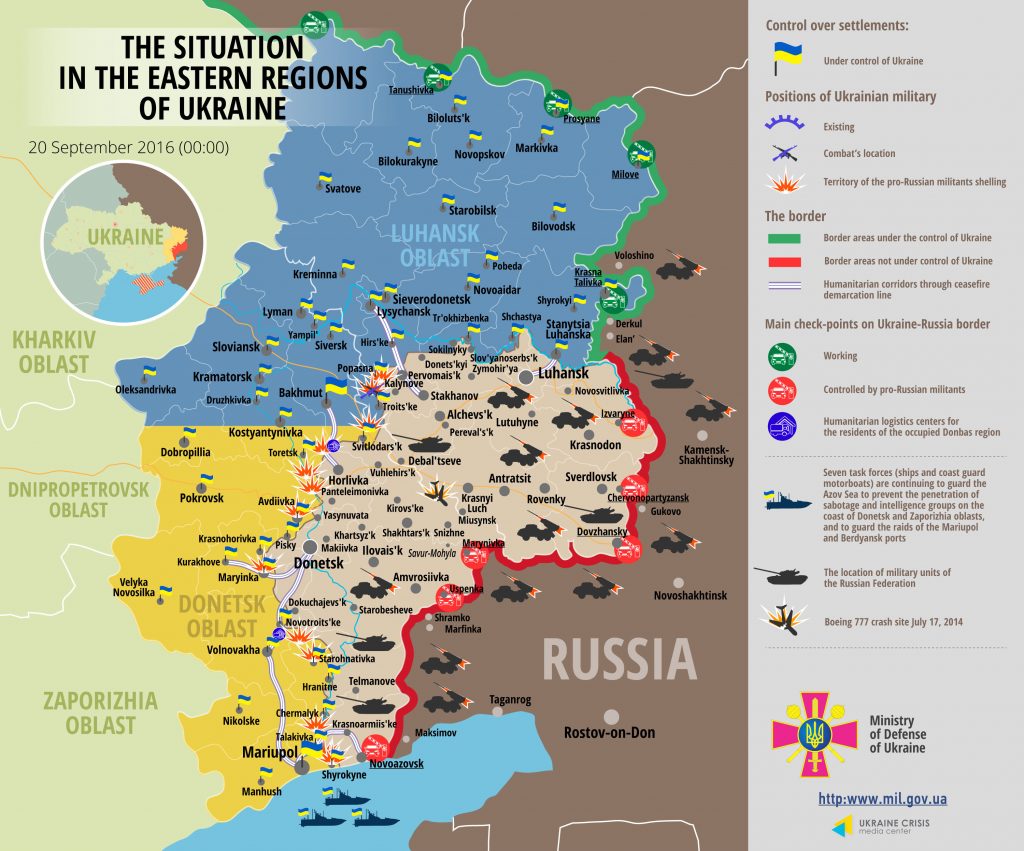 Ukrainian Armed Forces incurred no losses yesterday, and three troops were wounded. Two servicemen were injured as a result of tripping a wire, and the third sustained a gunshot wound, all of them in the vicinity of Avdiivka.

Significant increase in the number of armed provocations is registered in the north of the Mariupol sector. “There were no attacks near Krasnohorivka and only one from light weapons near Mariinka. Moreover, militants opened fire from small arms, machine guns and grenade launchers in the vicinity of Shyrokyne and Pavlopol. Moreover, sporadic attacks involving use of small arms took place near Bohdanivka, Starohnativka and Vodiane,” said Col. Lysenko. In total, militants instigated eight provocations against ATO troops in the Mariupol sector.

According the Ukrainian military intelligence, Russia continues supplying militants with manpower and ammunition. “Two trucks and a bus with insurgents came to Novoazovsk from the territory of Russia yesterday,” said the spokesman.