Mortar attacks continue in all the sectors. 120-mm mortar launchers are used the Donetsk sector where 19 shells are fired. A civilian inhabitant injured in a militants’ shelling.

Kyiv, September 25, 2016. Militants are violating the preliminary agreements on troops’ disengagement in the vicinity of Zolote town. “According to the OSCE Special Monitoring Mission (SMM), militants are hindering monitors’ access to the area and installed concrete blocks on the road from Pervomaiske to Zolote, which directly violates the Minsk and political agreements as well as the SMM mandate stipulating access to any area on the frontline,” informed Colonel Andriy Lysenko, spokesman of the Ministry of Defense of Ukraine on ATO related issues at a press briefing at UkraineCrisis Media Center. 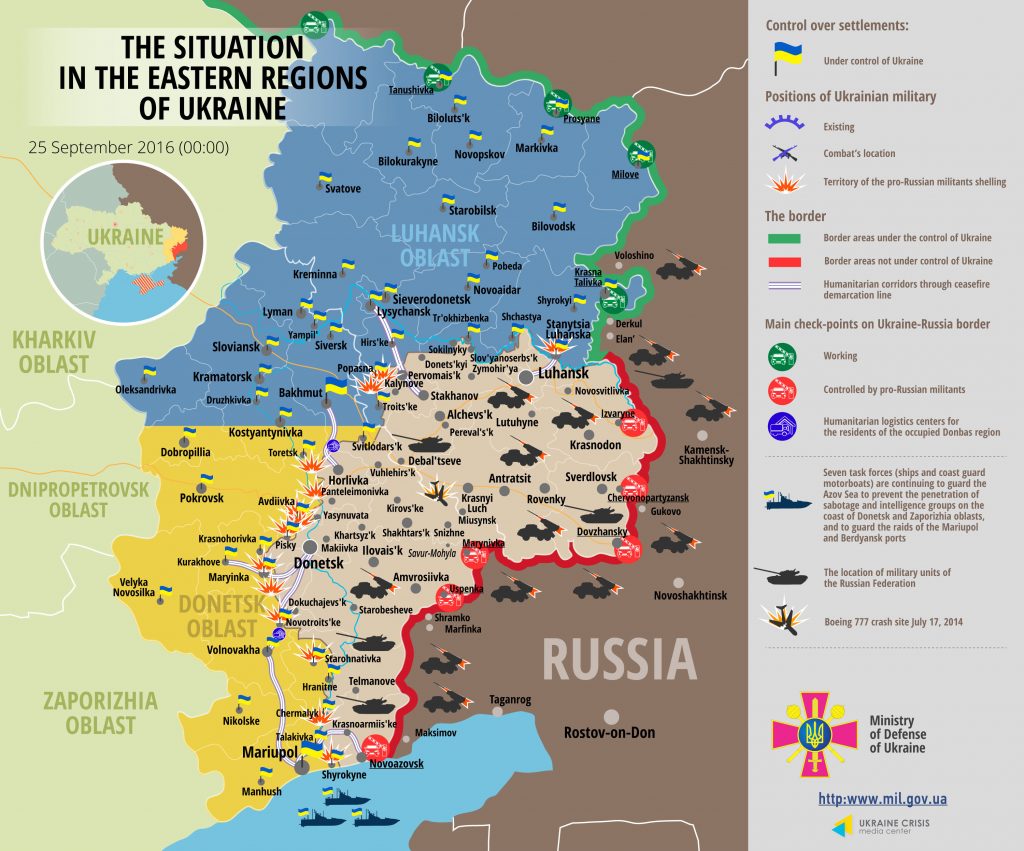 The situation remained tense in the combat activity zone yesterday. Militants mostly used small arms and mortar launchers – in the Donetsk sector only, where insurgents launched over 40 mortar shells, according to the General Staff estimates.

Five militants’ armed provocations involving use of small arms and under barrel grenade launchers took place in the Luhansk sector. “Areas near Popasna and Stanytsia Luhanska remain the areas with high level of combat activity,” said the spokesman.

In the Mariupol sector the armistice was violated 12 times, small arms were used each time. Half of these incidents took place in Mariinka. Moreover, sniper’s activity was registered there late at night. “Militants’ troops were violating the ceasefire in Taramchuk, Novotroitske, Starohnativka, Pavlopil and Shyrokyne. Ukrainian forces did not respond with fire to the adversaries’ provocations,” said the spokesman.

Ukrainian Armed Forces incurred no losses in combat in the past 24 hours, one serviceman was injured in militants’ shelling in Avdiivka.