Kyiv, October 2, 2016.  Troops and equipment disengagement of the Armed Forces of Ukraine and militants of took place in Zolote yesterday in compliance with framework agreement,” informed Colonel Oleksandr Motuzyanyk, spokesman of the Ministry of Defense of Ukraine on ATO related issues at a press briefing at Ukraine Crisis Media Center.  “Combat activities were rather rare in this area so this process was successful, which was confirmed by  representatives of the Joint Center for Control and Coordination and OSCE Special Monitoring Mission. A checkpoint may start functioning here in future. Militants have been blocking this process for over a year now. Hostile attacks continue in other frontline areas, in Stanytsia Luhanska first of all, so the parties’ troops and equipment disengagement did not take place yet,” said Col. Motuzyanyk. 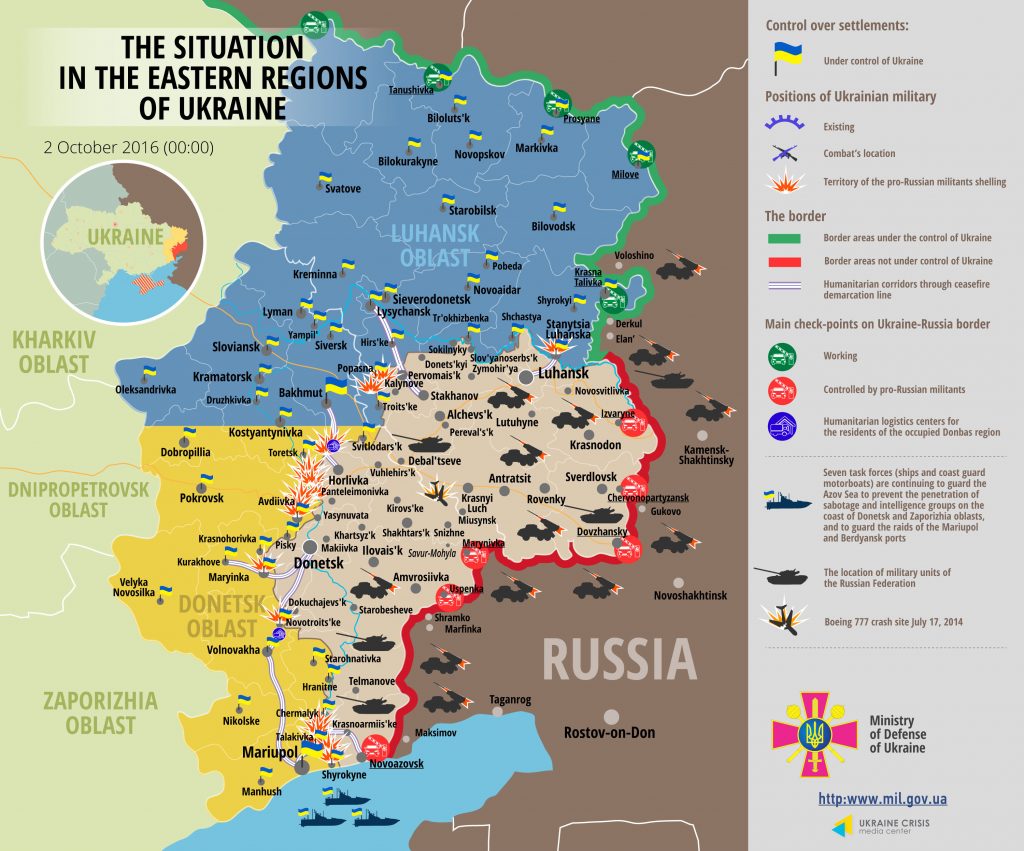 Ukrainian Armed Forces incurred no casualties in combat yesterday. The most intense hostilities took place in the Donetsk sector where militants shelled Ukrainian positions 20 times in one day. Nine attacks involved use of mortar launchers. The latter took place in Zaitseve-Maiorsk-Verkhniotoretske and Kamianka-Avdiivka industrial area frontline sectors. Col. Motuzyanyk emphasized that militants systematically increase the were launched at our positions yesterday. The enemies are   using small weapons almost without limitations,” said the spokesman.

Ten militants’ attacks took place in the Luhansk sector yesterday, one attack involved use of an 82-mm mortar launcher. Russia-backed militant groups violated the ceasefire in Stanytsia Luhanska in Popasna district. Especially intense firefights between ATO troops and the adversaries took place between 7 and 10 p.m. The occupants use quite wide a range of weapons, namely sniping rifles and 82-mm mortar launcher,” elaborated Col. Motuzyanyk.

The majority of 17 ceasefire violations in the Mariupol sector took place in Pavlopil-Shyrokyne area. “Occupants violated the armistice during the day and at night. They used 82-mm mortar launchers two times, snipers twice and armor once. Moreover, occupants violated the ceasefire in Mariinka and Novotroitske,” said Col. Motuzyanyk. He added that work of six unmanned aerial vehicles of Russia-backed militant groups was registered in all the sectors.

The spokesman also informed that a former militant was detained in Luhansk region. “In 2014 the detainee was released from a penal colony was released on parole. Then he went to Donetsk where he was given an assault rifle and kept watch at a militants’ checkpoint. Nevertheless, he fled from the ranks of Russia-backed militants due to the problems with payment of remuneration,” elaborated Col. Motuzyanyk.