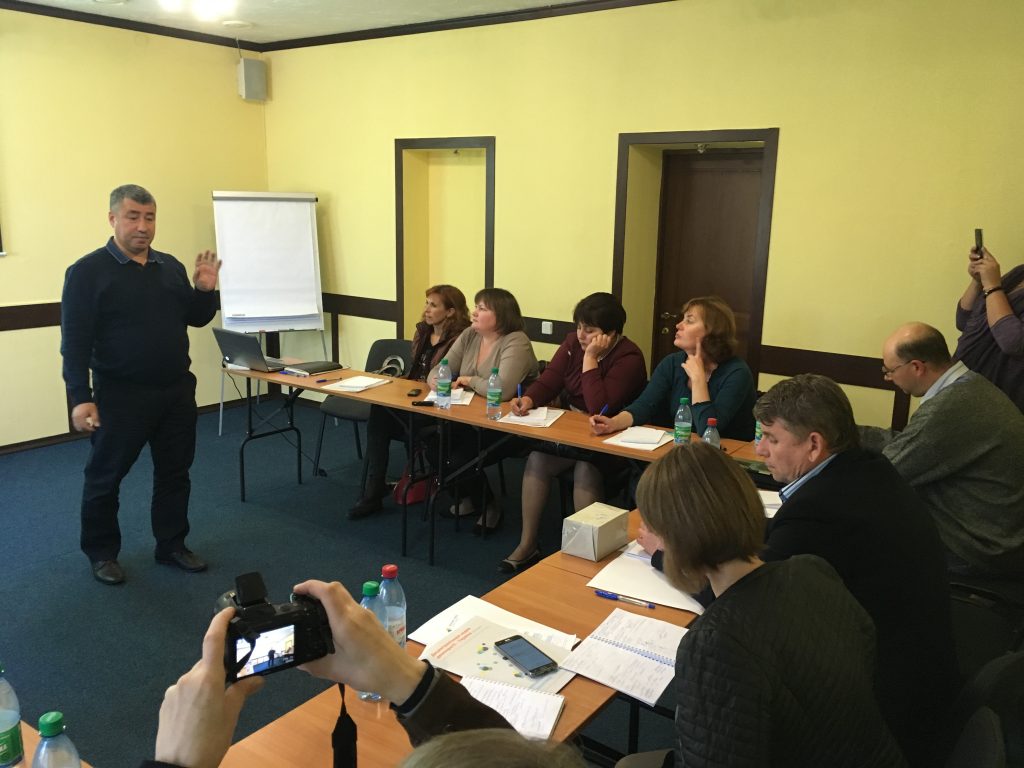 Mykolayiv, October 3-4, 2016. Whether people are able to figure out the content of reforms in education system as well as the problems that need to be resolved, depends not only on those who are directly implementing the reform but also on the media. The role of the media in this process is to cover implementation of the reform in a responsible and detailed manner. On October 3 and 4 editors and journalists of Mykolayiv region had a chance to get more information on the theme during a training session in Mykolayiv.

Lecturers at the training were Iryna Kohut, expert on secondary education at CEDOS analytical center, and Aider Seitosmayev, expert of the Swedish-Ukrainian project “Support to Decentralization in Ukraine”. The issues discussed at the training included overall review of reforms in education sector, their preconditions, content and directions of implementation. Special emphasis was made on interconnections between the education reform and decentralization, pointing at the opportunities that consolidation of local communities opens for development of secondary education. The system of funding as well as the setup of school networks was also in focus of the training.

Analyzing education reform in the context of decentralization Aider Seitosmanov noted that at the core of the changes offered to the communities, there should be the interests of their members. The quality of school education is one of them. “Reloaded education system at school within communities is supposed to guarantee not only the formal level of knowledge but to also help form and develop children’s skills that include communication, teamwork and ability to implement the knowledge in practice. It is why the schools need to be optimized, not because of the lack of budget money. New level of management that concerns both the education system in general and schools in particular needs to emerge in communities,” the expert emphasized.

According to the trainers there is a certain resistance to education reform on the part of rural population. They often tend to think that should the school in their village disappear, the village itself will disappear too. Teachers and directors of village schools same as the rural population in general are not very well informed on the essence and the idea of the changes, and are thus main agents of resistance to establishing hub schools. Experts emphasized the special role that journalists of regional media get in the reform process. It is expected that media representatives will streamline the information on changes to the education system as well as will monitor these changes.

Reflecting on education level of children in rural schools Iryna Kohut noted that it is not only about mostly unsatisfactory quality of education in rural areas. In her opinion, the level of parents’ education in rural areas is lower, it has a direct impact on their children’s achievements and their enthusiasm to get knowledge. “Unfortunately results of the independent external testing demonstrated by children from rural areas are critically lower than those of urban school graduates. That’s why hub schools are a tool to bridge the gap between the children from families with different income level, between the rich and the poor, between the village and the city,” the expert noted.

The training session is the eleventh event in the framework of the Ukrainian-Polish project, aimed at empowering local printed media of Mykolayiv region. The team of Ukraine Crisis Media Center is implementing the project through the regional Mykolayiv-based coordinator. Warsaw-based East European Democratic Center is the Polish partner within the project.

The project is implemented in the framework of the Poland-Canada Democracy Support Program under financial support of the Program of Polish cooperation for development of the Foreign Affairs Ministry of Poland and of the Government of Canada.