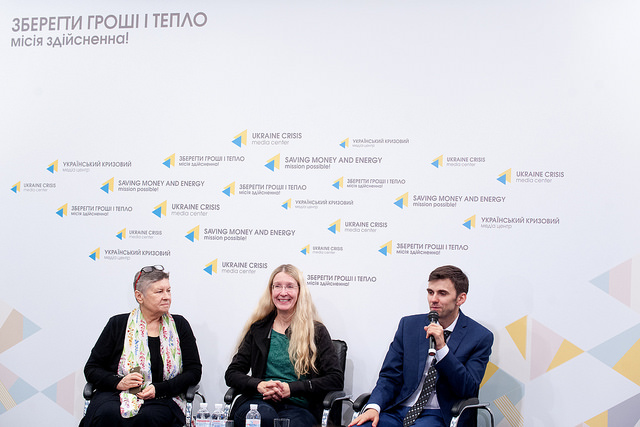 Kyiv, October 21, 2016. Healthcare system should be completely changed, not just reformed. You cannot reform something that does not work. This was stated by Ulana Suprun, acting Minister of Healthcare of Ukraine, at a discussion held at Ukraine Crisis Media Center. Among the reform priorities – financing focus on the patient, not the institution; availability of medicines, standardized protocols of providing medical care, development of public health and, most importantly – insurance medicine. “Today, 99 percent of the budget financing goes on treatment and only 1 percent – on preventive medicine. We want to shift the focus. Patients must be treated, but it would be better if people did not fall ill, could work, pay taxes, then there would be more money to treat those who are ill,” said Ulana Suprun.

According to Pavlo Kovtoniuk, Deputy Minister of Healthcare, the cost of medical services ranks first among the reasons why people in Ukraine fall below the poverty line. “We need to move from the Soviet model of medicine maintenance and promises that it will be free, while in fact there is no money to treat people, to clear obligations on the amount of care that will be covered in case of illness. This is the insurance model,” stressed Mr. Kovtoniuk. From all the available models we selected the one where money from taxes is accumulated in the state budget. “But the most important thing is to change the approach. We should take the money and use it for insuring people. Finally, we should pay for the service in case of illness, not just distribute a little portion to all hospitals, explained Mr. Kovtonyuk. According to him, the process can start in 2017 on the level of primary care: family doctors, general practitioners, pediatricians.

The Deputy Minister explained that the tariff is set for one patient per year. It is the charge for the service and not for the procedure or visit. “Otherwise, it is of benefit to the doctor to keep patients at place. It should be of benefit to the primary link doctor when you are healthy. Then there is an incentive to care for patients. A patient can choose who to visit without reference to the place of his residence. You choose which doctor is good, and we pay him for this,” noted Mr. Kovtoniuk.

Salaries to doctors, as well as insurance should be paid by the insurance agency where people make contributions. It is part of the executive authorities, and it has its departments in every region. Doctors have to be independent; they may organize medical practices and choose the conditions that are more convenient for their patients. According to Pavlo Kovtoniuk, currently the standard is being developed that would separate the primary and the secondary links. “The agency and the primary care provider enter into a contract: on our part – funds, on your part – the standard – what exactly you have to do, and what will be sent to a different level. It will be clearly regulated, lest the doctors send to the secondary level immediately,” explained the Deputy Minister.

Other priorities of the reform

According Ulana Suprun, currently patients pay for 98 percent of medicines. The program of reference prices can be launched starting January 1; the relevant draft resolution is already in the Cabinet of Ministers. Besides, the Ministry of Healthcare insists on introducing the standardized protocols of medical aid: the same quality based on the international standards should be provided in all medical institutions, medical institutes and regions.

Ms. Suprun informed that public health centers will open in regions. “Their objective is to collect statistics, to monitor the prevention, immunization course and overall health of the nation. In many cases the preventive measures or early intervention can prevent diabetes and heart diseases which are common in Ukraine,” she believes.