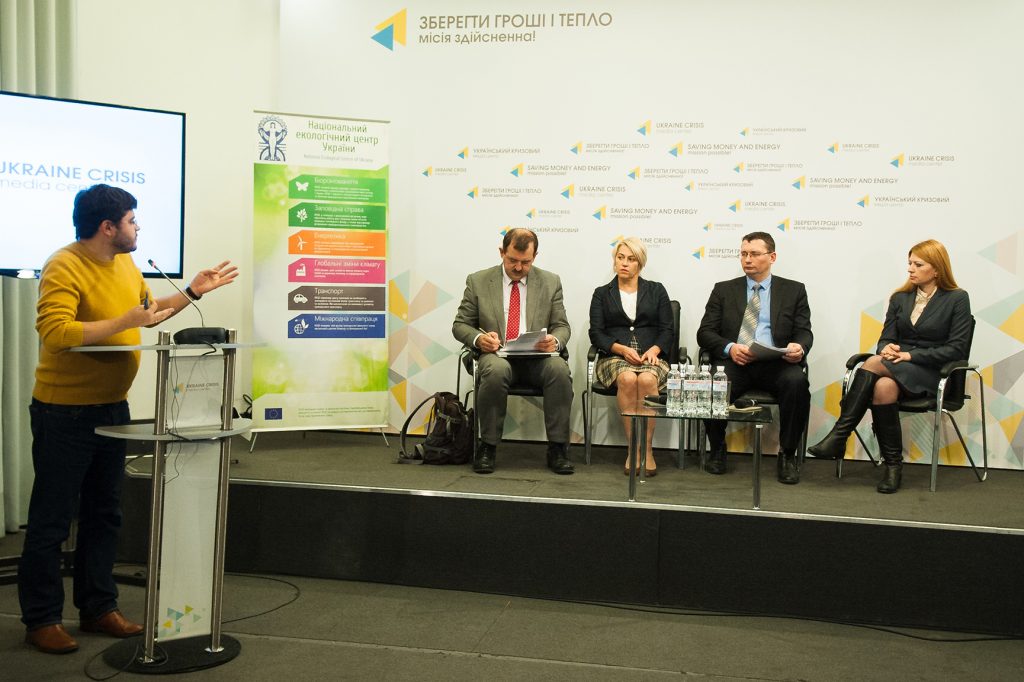 Law suggests that households install meters at the expense of consumers, the law opens data on the amounts of consumed household services however, individual meter installation is not regulated.

Kyiv, October 26, 2016. The law on commercial metering of utilities will allow consumers to pay for the really consumed service, clearly see how much and what for they pay and to regulate consumption. The only players for who this law is disadvantageous are populist politicians as well as heating companies and water utility companies. This was stated by members of parliament (MPs) and experts at a discussion held at Ukraine Crisis Media Center.

The meter will allow paying only for the actually consumed service

“This law is to ensure fairness in calculating the quantity of consumed services and guarantee payment for actual consumption,” stated Alyona Babak, MP (“Samopomich” faction). She reminded that now water consumption is calculated by the number of people registered in the apartment, although many people do not reside at the place. In addition, by normative calculations, the renovated and insulated buildings de facto pay the same amount as those where due to poor management there are leaking basements, heating is wasted, and so on.

Meters are installed at the expense of consumers

“Anyway, all meters will be purchased at the expense of consumers. But the money will be collected in a different way – either as part of tariffs or taxes or direct payments within condominiums. The question of how quickly this is done is a matter of terminal costs (and losses) for the residents,” explained Svyatoslav Pavliuk, expert of the Reanimation Package of Reforms.

Also, the money on meters can be laid in the target program of local budgets. “Each local government may adopt a target program for the local budget to finance the installation of meters. Then people will use it free over a certain period of its operating life because we will pay for it from tax revenues,” noted Alyona Babak.

Meters will be serviced by supplying companies – for a monthly fee

In the homes where meters were installed earlier, consumers will no longer have to deal with their calibration and maintenance themselves – these functions will go to a supplying company. “All this will be determined in the monthly fee and they will pay according to the tariffs set by local authorities,” detailed Yevheniy Mahlyovanyi. If there is no meter, consumers will pay the monopolist for both installation and servicing of counters through the fee.

Installation of the meter for the whole building ≠ collective consumer

“There are fears that everyone will be forced to be a collective consumer, but you will find it neither in the law on commercial metering nor in the law on housing and public utilities,” emphasized  Tetyana Boyko, coordinator for housing & public utilities programs, civil network “OPORA”. Condominiums will have this right, but it will not be a duty. “Condominiums have the right to be a collective consumer. Those who want to pass this responsibility on to the service provider also have the right to do so. Then condominiums will deal with only part of the house maintenance and there will be individual agreements on communal services,” she explained.

“This draft law is the first attempt to spell out the division between individual and whole-building accounting system,” said Svyatoslav Pavliuk. “There must be a meter at the entrance to the house, but if water or heat meters are in the apartment, their readings will be considered in the distribution of the total amount of the whole-building meter,” added Alyona Babak.

It is also expected that each apartment will have heat distribution systems – to determine the consumption of every apartment. They also introduce the so-called “minimum share of specific consumption” – the required minimum that an apartment must consume and pay for. This is a protector for consumers who may try to switch off a battery and save by using the heat from neighboring apartments. Alyona Babak noted that this minimum will ensure temperature at 15C. A special opportunity is provided to corner apartments, which have greater heat losses due to their specific location. They will be able to determine their individual rates of heat consumption. “This will be done when calculating the payment for each apartment,” she said.

A meter will motivate a consumer to save

Availability of measuring devices will motivate a consumer to change his behavior, said Svyatoslav Pavliuk. It has been confirmed by implementation of gas meters. “Saving starts from measuring. If there is no information about the quantity used by a particular object, the economic indicator of energy efficiency will be out of the question. Only the meter will show how much electricity or water the house will save through thermoinsulation of walls, replacement of windows, etc.,” noted Yevhen Mahlovanyy, Director of Technical Regulation Department of the State Agency on Energy Efficiency and Energy Saving of Ukraine.

Alyona Babak added that to motivate the utility service provider a rule will be introduced by which it has to reimburse part of the losses due to delayed elimination of leaks or breaks in the piping.

The law guarantees access to information on the services consumed

Alyona Babak noted that the law will open the information on measuring and distributing the consumed services between each apartment and non-residential premises. According to her, now even condominium consumers cannot easily get this information. “This law requires opening information about the quantity of heat or water supplied for each consumer, about the amount of payments and the quantity distributed to general needs and each apartment – for people to understand that they are not deceived,” she noted.

Tetyana Boyko, coordinator for housing & public utilities programs, civil network “OPORA,”
noted that the draft law on commercial metering is closely linked with draft law on housing and public utilities No.1581-D. “It regulates the management of the house and public utilities provision relationships. The law on the commercial metering is based on the logic that is embedded in the law on housing and public utilities,” stressed the expert. It has already passed the first reading and will be re-submitted for second reading on Thursday. “The law will be effective when contractual relationships of heating companies or water utilities are clearly defined. The type of relationship will determine who is responsible for distributing payment in the house. Typically, this is the responsibility of the managing company or the company that acts as the service provider. It is the service provider that is to do this. To use coefficients or not to use will be your right,” added Alyona Babak.

The successful implementation of this draft law requires not only the law on housing and public utilities, but also a number of other legal acts, including on debt restructuring for heating companies. It is necessary that this situation should become unfavorable to enterprises-monopolists, and they should become directly interested in saving and modernization.

Commercial metering is disadvantageous only to populists, heating companies and water utilities

According to Tetyana Boyko, the introduction of commercial heat and water metering is disadvantageous primarily to populist politicians because it will abolish “dilution” of responsibilities. “I think this is the main reason why the laws on housing and commercial metering have not been adopted yet,” she noted. Service providers – water utilities and heating companies also may oppose it. “Practice shows that payments for the permitted volume of consumption are much higher than those for the actual volume. Accordingly, enterprises-monopolists state about losses, trying to include it in the difference in tariffs or to inform that they have reduced sales, that the receipts decreased or that they have no money,” explained the expert. Tetyana Boyko noted that the investment component has been included in the tariffs for two years already.

Svyatoslav Pavliuk noted that a positive aspect of the draft law is that it clearly defines the deadline for meter installation. Besides, heat metering is the requirement of EU Directive No.27, which entered into force for Ukraine in November last year. The deadlines are the following: October 2018 for residential buildings and devices for measuring hot water and heat for all consumers – by November 30, 2019. “It is important to fix this term, because the longer we do not fix it, the more idleness of service providers we observe. The last year’s progress in installing heat meters (from 40% up to 70%) was made only because NKREKP “put the screws” to heating companies who simply do not approve tariff until it includes the investment component,” noted Svyatoslav Pavliuk.

Another positive moment is that the Directive requires that a meter should be chosen at a competitive price through tender. This will stop the practice when regional gas companies register only meters of the certain company.

According Svyatoslav Pavliuk, its drawback is that it “lists who has the right not to install meters rather than those who are to install them and in which way. Installation of individual measuring devices is not regulated; there is no deadline for this. This is a component that must be corrected,” said the expert. Besides, in his opinion, the minimum standards of heat consumption should be set by a manager of the separate building and not by the Cabinet of Ministers.

According to Alyona Babak, the economic incentive to install individual meters is incorporated in the very logic of the draft law. “The readings of the house meter will be distributed between apartments as follows: the readings of individual apartment meters and general-purpose needs will be deducted from this amount, and the difference that remains will be distributed among those who do not have meters. If you think this is unfair, you should install a meter,” she explained.