Long lasting attacks on Ukrainian positions are mostly circled around the same areas, although a new spot of militants activity detected, Ukraine suffers no casualties.

A building was ruined in Novhorodske in the Donetsk sector as a result of militants’ attack, and its resident died, informed Colonel Andriy Lysenko, the spokesman of the Ministry of Defense of Ukraine on ATO related issues at a press briefing at Ukraine Crisis Media Center. In general, militants’ attacks were quite lengthy, lasting from 30 minutes to several hours. “Adversary violated the ceasefire at the Svitlodarsk bulge, in several places near Horlivka and in the Avdiivka industrial area. Occupants were actively using mortar launchers, firing almost 150 mortar shells at Ukrainian positions,” emphasized the spokesman. Moreover, several mines planted by militants exploded near Maiorsk checkpoint. In total, seven militants’ attacks took place in the Donetsk sector yesterday, and five of them involved use of heavy armor. 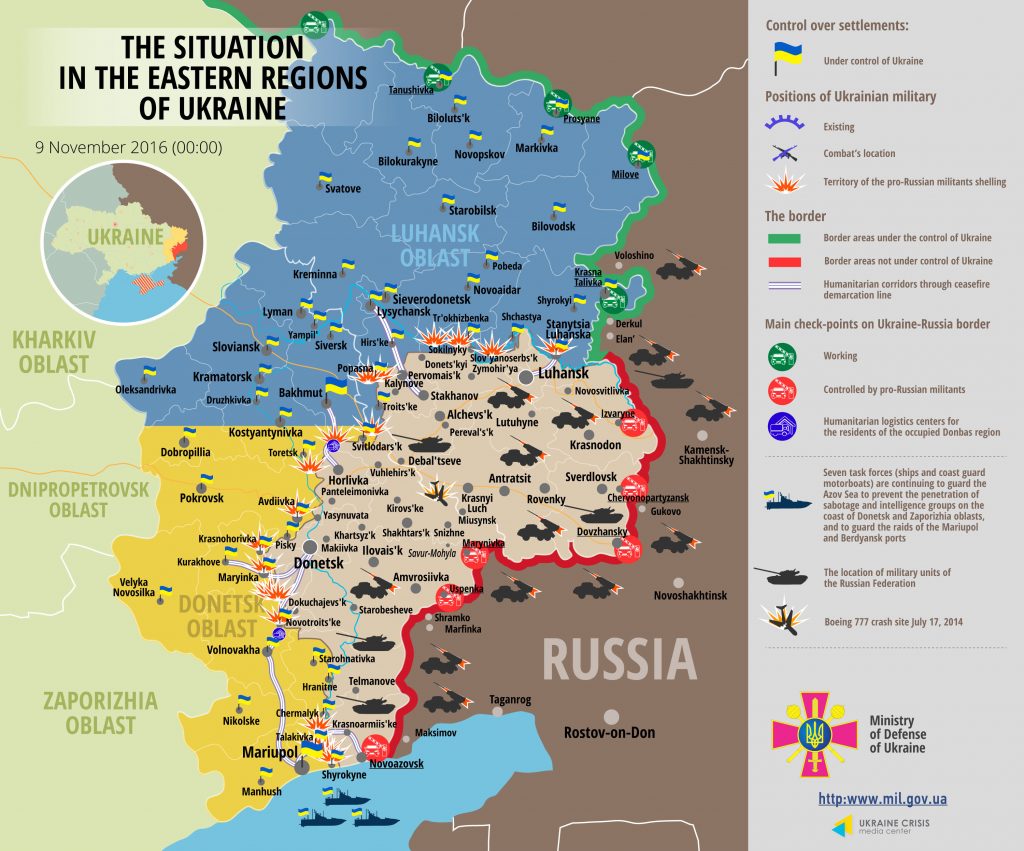 Militants are delivering fire along the entire front line in the Luhansk sector. Militants violated the ceasefire in Stanytsia Luhanska area, near Shchastia, near Slovianoserbsk and in Popasna area. “Hostile attacks in Stanytsia Luhanska continued about four hours with interruptions. Occupants massively used mortar launchers and 122-mm cannons in Krymske and the vicinities,” said Col. Lysenko. The total number of missiles militants launched from heavy armor reached 90. The biggest number of the most intense attacks took place between 4 and 7 p.m. In total, 16 militants’ attacks took place in the Luhansk sector yesterday, and six of them involved use of heavy armament.

No Ukrainian troops died in combat yesterday, and three were wounded.

Intense mortar attacks continue along the entire front line in the Mariupol sector. In addition to traditional flashpoints – Krasnohorivka, Mariinka and its sights – militants became active in Dokuchaevsk and Olenivka.
“According to Ukrainian intelligence, five wagons with Russian ammunition were delivered there recently,” added Col. Lysenko. In total, 31 militants’ attack took place in the Mariupol sector yesterday, and 20 of them involved use of heavy weapons.