The duration of attacks increases, militants employ ZU-23-2 systems, mostly attacked spot was Pavlopil in the Mariupol sector.
Active hostilities continued in Luhanske and Avdiivka.  Militants used mortars during each attack, launching over 200 mortar shells at Ukrainian positions, said the spokesman of the Ministry of Defense of Ukraine on ATO related issues Colonel Oleksandr Motuzyanyk at a press briefing at Ukraine Crisis Media Center. “The attacks lasted from 45 minutes to several hours,” said Col. Motuzyanyk.  In total, five militants’ attacks took place in the Donetsk sector yesterday, and all of them involved use of heavy armor.
One Ukrainian serviceman died in combat yesterday, and four were injured while performing combat tasks on the frontline. 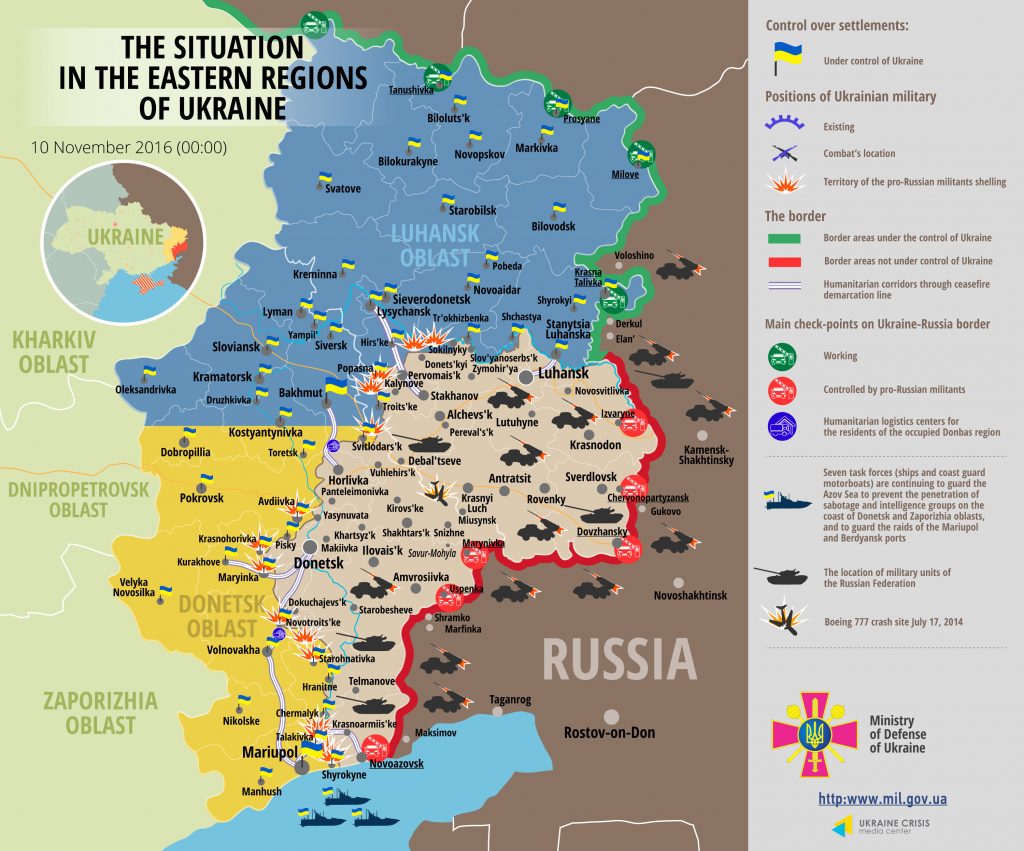 The armistice held in Stanytsia Luhanska and Shchastia in the Luhansk sector yesterday. Active hostilities started after 12 p.m yesterday and continued in Krymske and in Popasna area yesterday. “In addition to light weapons, militants repeatedly used ZU-23-2 systems, armor and mortar launchers,” said the spokesperson. In total, the insurgents made 14 attacks in the Luhansk sector yesterday, and four of them involved use of heavy arms.

The most intense attack at Ukrainian positions in the Mariupol sector involving use of mortar launchers took place in Pavlopil yesterday. It lasted over an hour. Russia-backed militants launched over 30 mortar shells from 82 mm and 120 mm mortars. Mortar attacks at Ukrainian positions in Krasnohorivka – Mariinka and Pavlopil-Shyrokyne frontline areas continue both at night and during the day. “Enemy’s activity decreased in the vicinity of Dokuchayevsk.  Two residential apartment buildings were damaged in militants’ attacks in Mariinka,” added the spokesman. In total, 25 militants’ attacks took place in the Mariupol sector in the last 24 hours, and eight of them involved use of heavy armor.
Ukrainian field investigators found an element of a weapon head from a ZRK rocket with five anti-personnel mines and a primer. “The explosion was to take place during Ukrainian troops’ patrolling of the area. Owing to the intelligence services’ efforts, the subversive act was prevented,” said Col.  Motuzyanyk.

MoD report as of November 9, 2016 is available here, inteactive map of the region is here, for the chronological chart of shellings, please go here.