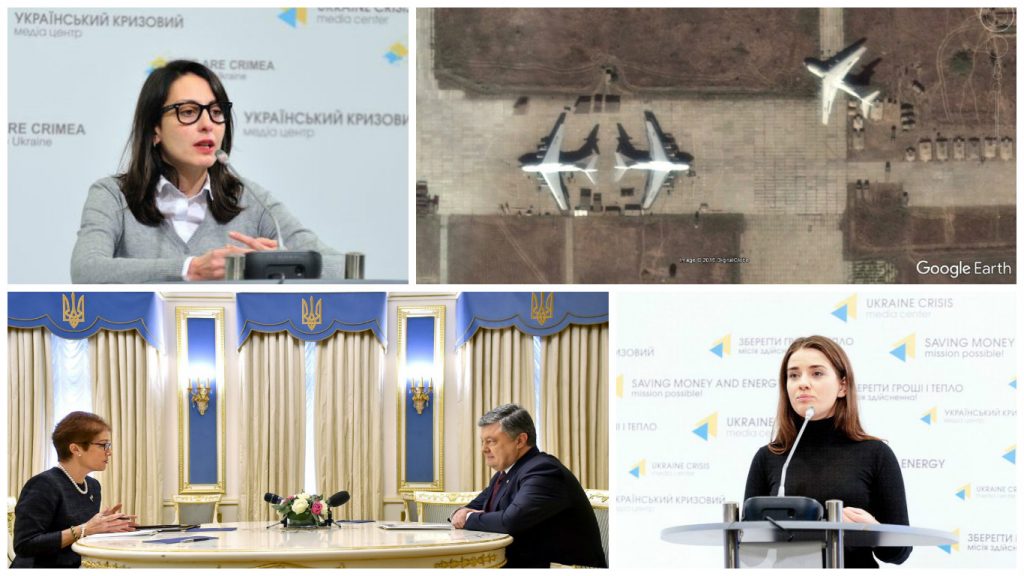 Weapons supply from Russia. Russia continues supplying weapons to the temporarily occupied territory in eastern Ukraine. On November 11 another consignment of tanks, 14 self-propelled artillery systems and fuel for them were brought, said spokesman of the Ministry of Defense on ATO-related issues.

Seized border crossing point and secret supply depots: how Russia has been sending supplies to militants for over two years. Huge army supplies are being transported in Donbas by railway from Russia. Respective video was recorded by a satellite camera, reports GlasnostGone. Over 2014-2016 Russia has been supplying military equipment and weapons through the seized border crossing point in Marynivka, Donetsk region. Thus, Russian cargo trains unloaded over 100 military vehicles in Sukhodilsk, they were then transported to the supply depot that before seizure served as a Ukrainian army base. Additionally, photos of a secret supply depot in Ruske were released (video).

OSINT investigation. Volunteers from the OSINT (open source intelligence) Ukrainian group Informnapalm identified and named Russian military involved in the attacks on Ukraine’s territory in 2014. The new investigation sought to discover and identify Russian military – artillerists of the 7th military base (military base no.09332, Georgia, the city of Gudauta in Russia-occupied Abkhasia) of the 49th army unit of Russia’s Southern military district. As part of the combined rocket artillery division the unit was taking part in attacks upon Ukrainian cities, villages and positions of Ukrainian troops between the end of August and December 2014. OSINT investigators identified 21 out of the 35 military of this unit (investigation).

Elimination of militant Motorola: new accusations of the “DPR”. Representatives of the self-proclaimed “Donetsk People’s Republic” (“DPR”) claim that the Head of Ukraine’s Security Service in Donetsk region Vitaliy Marykov is involved in the murder of the Russian militant with nom de guerre Motorola (Arsen Pavlov). They say another alleged organizer of the murder is the Head of Ukraine’s Security Service in Luhansk region Oleh Kozlovsky. Militants claim they have detained actual killers of Motorola in Donetsk. According to them, these are six active members of the Ukrainian national organization “Misanthropic Division” who have allegedly confirmed their responsibility over the murder. They were allegedly ordered to do so by Ukraine’s Security Service that also tasked them with organizing subversive actions. Representatives of the “Misanthropic Division” refute the accusations and reassure that they are not present in the uncontrolled area.

Exchange of prisoners. Ukraine’s Security Service is ready to accept compromises for exchange of captives and release of Ukrainian prisoners of war. Ukrainian side emphasized that it is even ready for prisoners’ swap in the format one for three, said Advisor to the Head of Ukraine’s Security Service Yuriy Tandit. He emphasized that since the start of the combat actions a total of 3083 persons had been found and liberated, 494 are on the missing list, 109 are held in militant captivity. The agency is also checking the information on the missing Ukrainian citizens in Russia who might be in custody there.

Ukraine’s reaction to elections results in the USA
Civil society and academic community. Donald Trump’s victory came as a shock to Ukrainian society. Trump’s statements on Crimea as well as his sympathy with Russia and President Putin became subject to concern and vivid discussions in Ukrainian media.

One of the first Ukrainian politicians to have congratulated Donald Trump was former head of Odesa regional state administration Mikheil Saakashvili. Over the last week he was actively expressing support to the newly elected U.S. President as well as sharing memories on their friendship on his Facebook page.

Volodymyr Groysman officially reacted to Trump’s victory, however, he never mentioned Trump’s name itself in the message. Head of Ukraine’s Parliament Andriy Parubiy also congratulated Trump calling his victory “a new reality and new opportunities for Ukraine”. He reminded that Republicans have been usually supportive of Ukraine.

Politicians. The Opposition Bloc is preparing to observe the actions of Ukrainian authorities that “were humiliating and offending Trump just yesterday”. Although, they never presented their congratulations and only reminded that Ukraine inflicted a reputational damage to Trump’s election campaign due to the scandal with the “Black book ledger” of the Party of Regions, where Trump’s campaign chairman, Paul Manafort, was mentioned.

Head of the Radical Party, Oleh Lyashko, said he hopes that Donald Trump will not become Vladimir Putin’s close ally as he was promising in his campaign and called the election results “shock therapy”. Representatives of Batkivshyna (Fatherland) party have no doubts that partner relations with the U.S. will keep further growing stronger. Narodny Front (People’s Front) also expressed their hope for future cooperation and empowerment of civil society. Mustafa Nayyem, MP of the Petro Poroshenko Bloc, jokingly noted that Ukraine is ready to share its experience on how to survive under a president-troublemaker.

Head of Odesa Customs Yuliya Marushevska has also filed a resignation claim. Speaking at a briefing she explained her resignation with reluctance of authorities to reform customs administration in Odesa region.

On November 7 Police Head in Odesa region Giorgi Lortkipanidze also presented his resignation. It happened on the same day that the Head of Odesa regional state administration Mikheil Saakashvili resigned.

Human rights: “Ukrainian subversives” in Crimea and the case of a Mejlis leader

On November 9 Russia’s Federal Security Service (FSB) reported on the alleged detention of a “subversive terrorist group of the Main Intelligence Directorate of Ukraine’s Defense Ministry” that was planning “subversive actions on objects of military and civilian infrastructure on the Crimean peninsula” (UCMC material). Russian Security Service voiced the names of the so-called “Ukrainian subversives” detained in Sevastopol: Oleksiy Bessarabov, Dmytro Shtyblikov and Volodymyr Dudko. Ukraine’s Defense Ministry refuted the presence of its military in the annexed peninsula.

On November 10 a court in Sevastopol sentenced three Ukrainians to two months prison term. Later a video of the “detention” of Ukrainians was released. “Right Sector” business cards and weapons were said to be found on them. Volunteers of an international OSINT community analyzed the video and identified that the weapons are not combat ones but the ones intended for strikeball. They include two automatic rifles, a pistol, grenades and gas to fill in the weapons.

Mykhailo Honchar, colleague of the detained Bessarabov and Shtyblikov, said that they were working as military experts in “Nomus” analytical center. “They are well-known experts. If you google them, you will find their publications and comments. They are public figures. They fit badly into the ranks of spies and subversives,” Honchar said.

It is the second attempt of the peninsula’s self-proclaimed authorities to accuse Ukraine of preparing subversive activities. First attempt took place in summer 2016.

On November 14 Russia-controlled Supreme Court in Crimea will continue considering the hearing of the case of Akhtem Chyigoz, Deputy Head of Mejlis, representative and executive body of Crimean Tatars. Preliminary hearing did not take place as they failed to establish the connection with the detention center where Chyigoz is held.

Chyigoz was detained in January 2015 for taking part in rally for support of Ukraine’s territorial integrity on February 26, 2014. Russian authorities of the annexed peninsula charge the Crimean Tatar with organizing mass insurgency.

Crimea: Heating season and drugs problem
Kremlin-controlled Crimean authorities claim that they had started gas supply to the mainland Ukraine, namely to Henichesk in Kherson region. Sergey Aksyonov, head of the self-proclaimed Crimean authorities, says they have already supplied gas earlier this year and Ukraine owes them 18 million rubles.

Head of Henychesk district-level administration Oleksandr Vorobyov does not confirm gas supplies from the annexed peninsula. “They [Crimean authorities] are so used to lying that they do not know what to tell the people, that’s why they are saying that we need help.” He also refuted gas supplies in the beginning of 2016.

Self-proclaimed authorities of the annexed peninsula have acknowledged topical the problem of the drug use among local youngsters. “Distribution and use of drugs among young people has become daunting and requires joint decisive action,” said Igor Mikhailichenko, deputy head of the Crimean Ministers’ Council. Few days earlier press-service of the Russian Prosecutor’s Office in Sevastopol reported shutdown of a website that was used to sell drugs.

Half of those who experience biased attitude said the attitude comes from colleagues or neighbors, 31% pointed at civil servants, 22% on employers, 10% at teachers or doctors, 4% at law enforcement staff.

Mykyta Kadan is one of the first Ukrainian artists who started exploring the theme of Ukraine’s communist past and rethinking it in contemporary Ukrainian context. The artist’s new exhibition “Repeating the forgetting” is a series of paintings, graphic arts and installations. The researched subjects include Boychuk artistic school, artists of the “Gunned Renaissance” (Rozstrilyane Vidrodzhennya) and the further fate of the empty pedestal of the monument to Lenin.

Our selection of English-language materials in Ukrainian media
Reportage

”Ukraine reacts to Trump’s election as US president” – KyivPost

”What are the problems of Ukraine’s public broadcasting?” – Hromadske International’s interview with Ihor Rozkladay, lawyer at the Istitute of Media Law