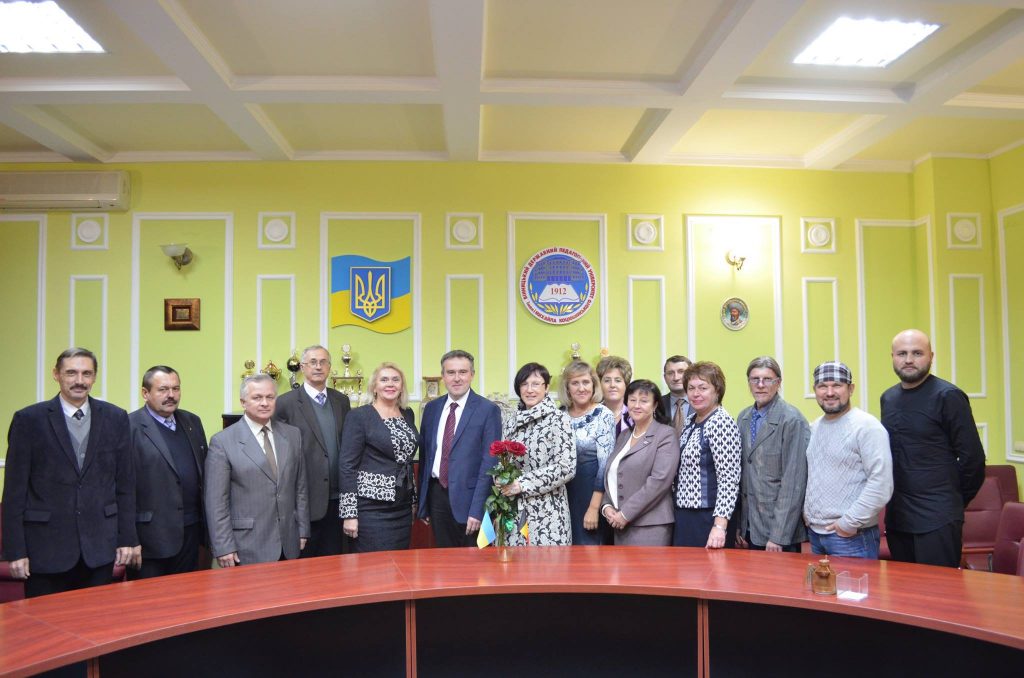 In the course of their visit to Vinnytsia, Ambassador Luc Jacobs, researchers of the Dmytro Yavornytsky Dnipropetrovsk National History Museum as well as culture managers of Ukraine Crisis Media Center met representatives of local academic community and local-level authorities.

Rector of the Vasyl Stus Donetsk National University, Roman Hrynyuk, invited Ambassador Jacobs to learn about the life of the university in exile located in Vinnytsia (the university moved from the occupied Donetsk in September 2014) and discuss the opportunities of academic mobility. Over the two years in its new location the university was largely assisted by both local stakeholders and international partners. The university has also increased the number of students that now reaches five thousand. Students presented the university history since the year it was founded (1937) to the Ambassador.

Head of Vinnytsia Regional State Administration, Valeriy Koroviy, spoke about latest achievements as to the attraction of investment to the region. Koroviy invited Ambassador Jacobs to encourage Belgian investment. Ambassador agreed and in his turn advised the governor to open Vinnytsia’s promotion office in the EU capital.

The visit was concluded with a lecture and opening of the exhibition at the Mykhaylo Kotsyubynsky Vinnytsia State Pedagogic University. Rector Natalia Lazarenko spoke about the university’s cooperation with China as well as about the plans to establish a closer cooperation with universities from neighboring states. Lazarenko also invited Ambassador Jacobs to promote cooperation between the Vinnytsia University and universities of Belgium. Ambassador suggested researching the history of diplomatic relations between the two countries that may become a platform for cooperation.

In his lecture for the Vinnytsia university students Ambassador Luc Jacobs and researcher Valentyna Lazebnyk spoke about the under-researched chapter in history – investments that Belgium and other European countries made in eastern Ukraine to reinforce its industrial potential. The exhibition is open until November 11. Entrance is free.

The exhibition “Ukraine-Belgium” ruins the myth on Soviet industrialization of central, eastern and southern Ukraine. The project emphasizes European context in the history of the region’s development that is under-researched and not well-known these days. Mining and metallurgy of Ukraine’s Prydniprovsky (the area around Dnipro) and Donetsk area developed with the help of business capital and the experience borrowed from England, France, Germany and Switzerland as well as thanks to the experience of foreign engineers. Belgian business capital was of particular importance; therefore Ukraine’s Prydniprovsky-and-Donetsk area was called “Ukrainian Belgium”. Almost 250 historical documents and photographs dating back to those times are represented at the exhibition. They recreate this period important for development of Ukrainian regions in a vivid and convincing manner.

The project is implemented with the support of Dnipro patron of arts Dmytro Pirkl who was buying historic documents in Europe in 2011-2015. Materials that he managed to collect were passed to the Dmytro Yavornytskyi Dnipropetrovsk national historic museum. Museum director Nadiya Kapustina took the initiative to study and analyze the documents. Valentyna Lazebnyk, head of museum’s scientific, research and exposition department of Ukraine’s history in XIV century – beginning of XX century, studied the materials and formed the exposition. Designer Yuriy Malenko visually arranged the materials into the exhibition.

The event is supported by the Embassy of Belgium in Ukraine, “SESVanderHave Ukraine” company – leader in sugar beet selection and growing, and “Hlyny Donbasu” (Sibelco group of companies) – world leader in industrial minerals production.

In summer 2016 the exhibition “Ukraine – Belgium” toured across eastern Ukraine visiting Lysychansk, Severodonetsk, Kramatorsk, Mariupol, Druzhkivka, Kostyantynivka and Sloviansk as part of the “Cultural diplomacy between Ukraine’s regions” project by Ukraine Crisis Media Center. The exhibition is presented at the Vinnytsia pedagogic university at the initiative of project’s curator Leonid Maryshchak – graduate of the university’s Institute of history, ethnology and law.