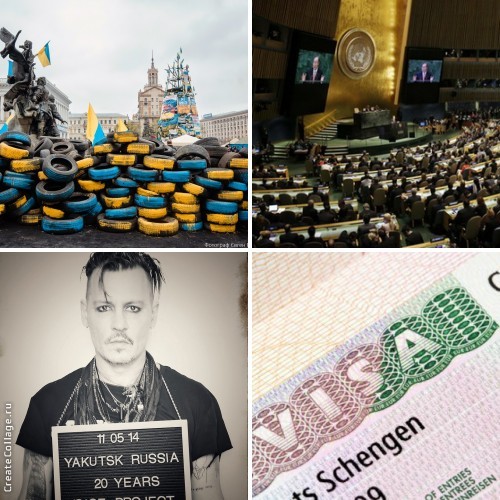 Situation in eastern Ukraine
Situation on the ground. Situation in eastern Ukraine remains tense, however the number of atacks on Sunday decreased three times in comparison to the average daily number of attacks observed over the last week. Ukrainian side registered a total of 232 hostile attacks upon Ukrainian troops over the last week. One Ukrainian serviceman was killed in action and 16 were wounded in action. Russia-backed contingent kept using heavy weapons. On Friday they were firing upon Talakivka from 150 mm artillery and used tanks when firing upon Shyrokyne.

On November 20 Russian-led forces decreased the number of attacks in all sectors. In the Mariupol sector Russian occupation troops fired upon Krasnohorivka from tank-mounted weapons, infantry fighting vehicles, 82-mm mortars; they fired with grenade launchers and small arms upon Novotroyitske and Vodyane. In the Donetsk sector Russian-led forces fired upon Luhanske and Avdiivka with mortars and grenade launchers. In the Luhansk sector Makarove, Zhovte, Krymske and Tryokhizbenka came under fire from the same types of weapons.

Elections in Donbas. Ukraine’s representative to the political subgroup at the Trilateral Contact Group on peaceful settlement of the situation in Donbas Olha Ayvazovska said that the sides did not come closer to the joint solution in negotiations as to holding of elections in the uncontrolled part of Donbas. Thus, Ukrainian side is insisting that Ukrainian parties must take part in the elections, while representatives of the occupied territories do not want to let them do so. Both sides agree that internally displaced persons have to participate in the elections. Ukrainian side is ready to set up special polling stations for them across Ukraine, while militants insist that they should be back home and cast their votes there.

Despite all the obstacles that Russia is creating, the mission was able to document Russia’s destabilization and destruction activities in eastern Ukraine. Russia has not been responding for three months to the OSCE’s appeal to let the monitors get access to the perimeter outside the border crossing points.

OSCE: possible offensive on Mariupol. In his statement released at the sitting of the OSCE Permanent Council in Vienna, U.S. Ambassador to the OSCE Daniel Baer reported about the possibility of the offensive by combined Russian-militant troops on Mariupol and its outskirts. He said that on November 14 combined Russian-militant troops blocked access of the OSCE Special Monitoring Mission to the two areas north-east of Mariupol.

Restrictions to monitors’ access. At the same time the OSCE mission’s access to the disengagement areas Pervomaysk-Zolote, Stanytsia Luhanska and Petrivske-Bohdanivka is still limited, reported the OSCE mission. These areas can still be possibly mined.

The way to visa-free regime with the EU
Ahead of the third anniversary of the start of Revolution of Dignity the Council of the European Union released a statement stating that the visa-free regime for Ukraine and Georgia will come into force simultaneously with the start of work of the new mechanism set to suspend the visa free regime. As a result Ukrainians will be able to travel to the Schengen countries for a 90-day period within a 180-day period without a visa.

The EU expects that negotiations on the suspension mechanism will be concluded in the nearest time. European Parliament has been long insisting on it, starting from this April Ukraine’s aspirations have been supported by the European Commission. Finally this week after overcoming resistance of some member states, EU’s third decision-making pillar the Council of the European Union has supported EU’s visa-free regime with Ukraine.

Revolution of Dignity Anniversary
Translation of the screenshot: “We’re meeting at 22:30 by the Independence monument. Make sure to dress warmly, bring umbrellas, tea, coffee, good mood and friends with you. Repost is welcome!”

Mustafa Nayyem, journalist at that time, currently an MP, wrote this appeal on his Facebook page on November 21, 2013, following the decision of the Ukrainian government to suspend the preparation to signing of the Ukraine-EU Association Agreement announced earlier that day. Mustafa’s post is believed to have triggered the beginning of peaceful demonstrations that grew into Euromaidan.

A series of commemorative events took place in Kyiv and all across Ukraine on November 21 to mark the beginning of the Revolution of Dignity. People were commemorating Euromaidan heroes at the Alley of Heaven’s Hundred Heroes in Kyiv. A modern memorial with quotes from most prominent Euromaidan-related Facebook posts was opened in Ivano-Frankivsk, western Ukraine. President Poroshenko made a statement suggesting that the memorial and museum will be set up at the Alley of Heaven’s Hundred Heroes. He also emphasized the need to establish a charity fund to raise the money for its construction.

About 380 public events were scheduled around Ukraine on this day. It was expected that 66 thousand persons will take part in them. Almost 18 thousand law enforcement staff will be securing the order. A series of information stands “Places of the Revolution of Dignity” will be installed in Kyiv to mark the sites of Euromaidan’s key events in 2013-2014. Ministry of Culture will conduct a series of educational public events in November. Ukraine’s Institute of National Memory will present a multimedia informational project “Courageous: our heroes”.

To recreate the atmosphere of the revolution three years after Ukraine Crisis Media Center has compiled a multimedia vocabulary of Euromaidan. Check it out.

Human rights: “Ukrainian subversives” in Crimea, draft law against domestic violence and labor slavery in Russia
Two more detained in Crimea. Two more persons – Oleksiy Stohniy and Hlib Shabliy, were arrested in occupied Crimea and dubbed “Ukrainian subversives”. First one is presented as colonel of Ukrainian intelligence, second one as Ukrainian officer. They were detained last week, however, it became public only on November 21. Court ruled for two-month pretrial detention of Ukrainians.

One of the Russian TV channels has already published a video of interrogation of Stohniy and Shabliy. On the video they confess that they were getting money from Dmytro Shtiblikov, earlier detained in Crimea under similar circumstances. He has been also charged with conducting subversive activities at the order of Ukrainian intelligence. Stohniy was working in a stationery shop and is a graduate of the Sevastopol military university, while Shabliy is businessman and captain of second [military] rank.

Thus, Kremlin-subordinated authorities have charged five Ukrainians with spying and subversive activities on the peninsula. Three other detained are Oleksiy Bessarabov, Dmytro Shtiblikov and Volodymyr Dudka.

Labor slavery in Russia. Over 400 Ukrainians have become victims to labor slavery in Russia, reports Maria Tomak, project coordinator of “Media initiative for human rights”. Ukrainians go to Russia in search of work. Many do not sign written contracts. Upon their arrival to Russia those who get into labor slavery schemes often get their documents seized. When they are trying to get in touch with their relatives, they get arrested. As of now 400 such cases are known, however Russia reports on 2,000 cases.

Crimea: official position of international institutions
Third committee of the UN General Assembly recognized Russia an “occupant state” and the autonomous republic of Crimea as “a temporarily occupied territory”. The resolution adopted by the committee reconfirms adherence to Ukraine’s territorial integrity, does not recognize the annexation of Crimea as well as prohibits forcible drafting of the peninsula’s residents to the Russian Armed Forces. The resolution was adopted by 73 countries, 23 countries voted against it including Russia.

At the same time the International Criminal Court qualified the situation on the peninsula as an international armed conflict between Russia and Ukraine. According to the report, the armed conflict started not later than on February 26, 2014, when Russian military were deployed to get control over the peninsula. The report also emphasizes the pressure upon Crimean Tatars on the peninsula including the ban to enter Crimea, illegal searches and arrests, violations of the freedom of speech.

Moreover nearly each second respondent (49%) is of the opinion that the leader capable of becoming a substitute to Putin on the president’s post, is not likely to appear in the nearest time.

According to the opinion poll conducted by Levada Center, the number of Russian citizens who regard anti-Russian sanctions as a way “to weaken and humiliate” the country, reached its maximum – 74%. Opinion that the criticism of western states towards Russia should not be taken seriously, keeps dominating among the respondents, resulting in 59% of Russian citizens being of such opinion.

Culture: Johnny Depp supports Sentsov, museums in near-front area and Arsenal of freedom
American actor Johnny Depp made a gesture in support of Ukrainian film director Oleg Sentsov imprisoned in Russia under fabricated charges. Campaign “Imprisoned for Art” was organized by the human rights group Voice Project. As part of the campaign international artists seek to draw public attention to the fate of their colleagues from around the globe who have been jailed for political motives. Johnny Depp took part in a photo shooting where he was photographed with a plate indicating the date of Sentsov’s detention in Crimea, his prison term and the place of imprisonment.

History museums in the near-front zone – in Sloviansk of Donetsk region and in Lysychansk of Luhansk region are being reorganized into up-to-date cultural centers. The transformations are taking place as part of the “Under construction. Museum open” project of UCMC Culture and Arts Department. Curators as well as local and international artists will help reformat museums’ expositions by applying modern technical equipment and expertise. Museum staff will pass special training.

A series of public discussions will take place in Kyiv on the occasion of the third anniversary of the start of Revolution of Dignity. As part of the “Arsenal of freedom” program event participants will share their memories on the Revolution of Dignity: from placards and shields, to sandwiches and “Hrushevsky cocktails”. Dissidents Mustafa Dzhemilev and Semen Gluzman will take part in the discussion on November 24.

”Magnitsky act: how Russia is fighting against the western sanctions” – Hromadske International