Situation is the tensest in the Mariupol sector, militants use heavy weapons, yet Ukraine suffers no lethal casualties in the combat over the last 24 hours.

In Mariupol sector the situation remains unchanged. Militants fire intensively in Maryinka district and on the coastal lines. This was stated by Col. Oleksandr Motuzyanyk, Presidential Administration spokesperson on ATO related issues, at a press briefing held at Ukraine Crisis Media Center.  “The adversary made the most powerful mortar attacks in Krasnohorivka and with the use of armored vehicles in Shyrokyne. Almost all armed provocations took place in the afternoon, mostly after sunset,” said Col. Motuzyanyk. Totally, militants made 22 attacks, four with heavy weapons in Mariupol sector over the past day. 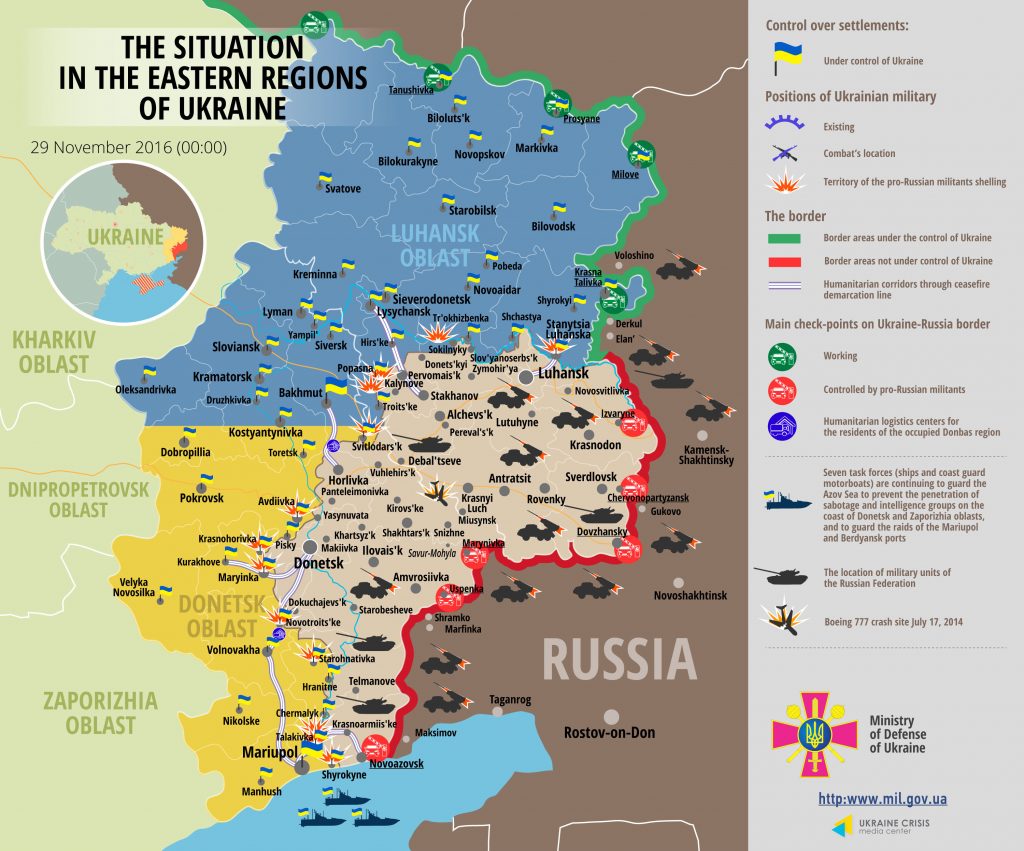 In Luhansk sector, the main combat operations unfolded in Krymske, where militants organized a series of mortar attacks. They fired 34 mines at Ukrainian positions. “Also, the adversary violated ceasefire once in Stanytsia Luhanska and repeatedly in Popasna district,” added the spokesperson. Totally, militants carried out 11 attacks, 4 – with heavy weapons in Luhansk sector over the past day.

In Donetsk sector, the combat operations were conducted in Luhanske and Avdiyivka. Firings are few in number, but they are long and powerful. “In addition to light weapons, military groups used armored vehicles and mortars. They fired 56 mines at Ukrainian positions,” noted Colonel Motuzyanyk. Totally, militants carried out five attacks, three with heavy weapons in Donetsk sector over the past day.

Over the past day of hostilities no Ukrainian servicemen were killed; five were wounded.

Ukrainian law enforcement officers continue to seize illegal weapons and ammunition in the area of Donetsk and Luhansk regions. “During the enhanced inspections in Kramatorsk, the police prevented the export of ammunition of nearly five hundred rounds and seized cold weapons and three improvised firearms. All weapons were seized, the perpetrators – arrested,” informed the spokesperson.

According to Colonel Oleksandr Motuzyanyk, Ukrainian border guards ensured the passage of 17 trucks with 230 tons of humanitarian aid through “Mayorsk” checkpoint.

Report on the military developments in East Ukraine as of November 28, 2016 is available here. Interactive map of conflict is here and chronology of shelling is here.