No Ukrainian troops died in combat yesterday, but six servicemen were injured. Ukrainian Armed Forces incurred these casualties in all sectors, informed the spokesman of the Ministry of Defense on ATO related issues Colonel Andriy Lysenko at a press briefing at Ukraine Crisis Media Center.

16 militants’ attacks took place in the Luhansk sector yesterday, and six of them involved use of heavy arms. Hostilities continued in all frontline areas – Stanytsia Luhanska, Novyi Aidar and Popasna districts. Russia-backed militants shelled the area of potential disengagement of troops and equipment in Stanytsia Luhanska. 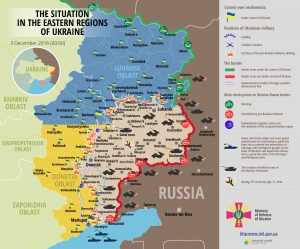 The armistice held only in Stanytsia and Zolote. Militants made 13 attacks in the Donetsk sector, using heavy weapons eight times.

“Intense hostile attacks continue along the entire front line, with the exception of Opytne – Pisky area. Four intense firefights between Ukraine’s troops and the enemy took place in Avdiivka. In total, they lasted eight hours.

Adversaries violated the ceasefire near Horlivka virtually along the entire perimeter of the town, with the exception of Zaitseve and Maiorsk. The enemies launched 140 mortar shells while shelling Ukrainian positions at the Svitlodarsk bulge and Butovka coal mine. Almost half of the attacks took place in the Avdiivka industrial area,” elaborated the spokesman.

Militants made 15 attacks in the Mariupol sector, and heavy arms were used during five of them. According to Col. Lysenko, intense attacks continue in the coastal area. Russia-backed militant groups used cannon artillery in Berdiansk; mortar

launchers were used in Talakivka and Vodiane, and both mortar launchers and cannon artillery was used in Shyrokyne.  Militants’ snipers were active to the north, in Mariinka and Bohdanivka.