Ceasefire stands during the until the dusk in the Luhansk sector, in the Mariupol sector Talakivka-Shyrokyne come under fire along with Avdiivka in the Donetsk sector.

The situation in the Donetsk sector yesterday was the most restless in Avdiivka, where Russia-backed militants used mortars. They launched 30 mortar shells at Ukrainian positions, informed the spokesman of the Ministry of Defense on ATO related issues Colonel Andriy Lysenko at a press briefing at Ukraine Crisis Media Center. In total, three intense long-lasting attacks took place in this sector. “All attacks happened in different places – in Luhanske, Avdiivka industrial area and Butovka coal mine position. Each lasted about two hours. It happened between 7 and 10 p.m. The armistice held in the Donetsk sector for the rest of the day,” said Col. Lysenko. 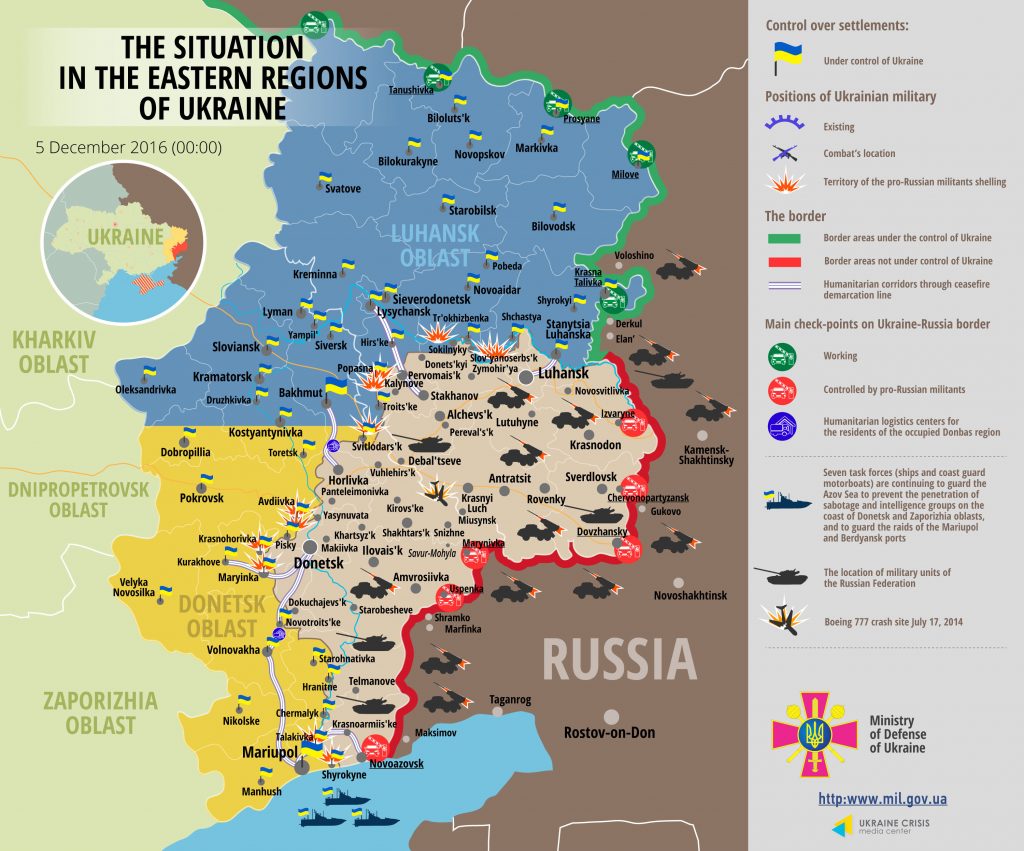 The ceasefire held in the Luhansk sector until 7 p.m. “Later adversaries started shooting in three areas at once – between Zhovte and Lopaskyne, in Krymske and near Popasna,” said Col. Lysenko. Militants mostly used light weapons. In total, nine militants’ attacks took place in the Luhansk sector yesterday, and heavy armor was used once.

According to Col. Lysenko, in the Mariupol sector militants are attacking in the Mariinka district and in Talakivka-Shyrokyne frontline area. Compared to the other sectors, militant use heavy arms the most here – 82-mm and 120-mm mortar launchers. “The most intense hostile attacks took place in Mariinka and Shyrokyne yesterday,” added the spokesman. In total, militants made 14 attacks in the Mariupol sector in the last 24 hours, and seven involved use of heavy armor.

Report on the military developments in East Ukraine as of December 4, 2016 is available here. Interactive map of conflict is here and chronology of shelling is here