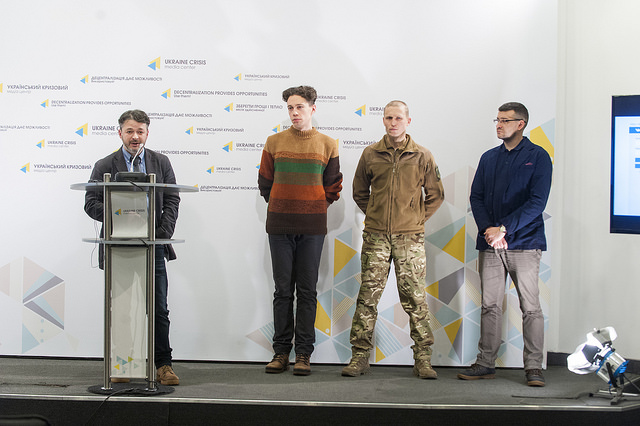 Earlier this year, the news that ISIS terrorists allegedly are fighting in the ranks of the Ukrainian army has spread over the Internet. The journalist of “BBC” Russian Service has made his investigation and found out where this fake comes from and what consequences it has for the Ukrainian army.

“BBC” investigation
Andriy Soshnikov, journalist of “BBC” Russian Service, has conducted his investigation of propaganda photo and video materials published on the Internet by hacker group “Cyber Berkut” in early 2016. The materials show that ISIS fighters allegedly demonstrate their belonging to the Ukrainian army special forces unit “Azov” and together with Ukrainian soldiers participate in combat operations in eastern Ukraine. Russian media actively spread this fake. Soshnikov managed to identify the location – the former “IZOLYATSIYA” art center in Donetsk that currently is the informal prison of the self-proclaimed “Donetsk People’s Republic” (DPR). The location is confirmed by both the structural features of the building and “IZOLYATSIYA” foundation representatives. Thus, the journalist found that the video could have been created only in Donetsk.

Position of the “Azov”
“Our enemy failed to expel us in Shyrokyne, but they managed to do this on the Internet,” stated Ihor Mykhailenko, commander of the regiment “Azov.” Such fake news shakes civilians’ faith in the Ukrainian army. It is commonly known that “Azov” is famous for its intransigence in fighting with pro-Russian militants. Therefore, according Mykhailenko, this video also contributed to the small victory of occupants, because “Azov” units were moved from the first front line to the second and third. He also added that such fake videos raise doubts in local people. However, the disclosure of fakes shows them who they should believe.

Oleksandr Alfyorov, “Azov” press officer, noted that this is not an altogether rare case. So-called “DPR” militants publish fakes on the Internet before every significant event. For example, before the referendum in the Netherlands (consultative referendum on the EU-Ukraine Association Agreement in spring 2016 – UCMC note) or before the next round of the Minsk talks.

Concentration camp in “IZOLYATSIYA”
“I had the opportunity to observe the organization of concentration camp in Donetsk. I visited the city when I was preparing the material for one of the Canadian media. On the way back I was detained by the so-called “DPR” terrorists. As a result, I appeared to be in a concentration camp organized on the territory of the former art center “IZOLYATSIYA” in Donetsk,” informed Dmytro Potekhin, director of the Nonviolent Solutions Agency. According to him, he was imprisoned in “IZOLYATSIYA” (now the ministry of state security of self-proclaimed DPR) for 48 days. They interrogated him, accusing him of working for the US intelligence services.

Oleksandr Vynogradov, communications manager, “IZOLYATSIYA” foundation, confirmed that the video shows one of the shops of their art center. In June 2014 Donetsk was captured by so-called “DPR” militants. As a result of that “IZOLYATSIYA” representatives were forced to leave the city.