Shelling is mild active in along the entire contact line, the attacks become ever more intense, the detained militant on the Ukraine-controlled territory points at Russian military present on the occupied territory.

Ukrainian Armed Forces incurred no losses in combat yesterday, but three troops were injured. The majority of militants’ ceasefire violations took place in the Mariupol sector. Russian proxies made 35 attacks there using mortar launchers, artillery and tanks, most of them along Pavlopil-Talakivka-Vodiane-Shyrokyne line,” informed spokesman of Ministry of Defense on ATO related issues Colonel Andriy Lysenko at a press briefing at Ukraine Crisis Media Center. The most intense attack took place in Krasnohorivka. “Militants opened mass mortar fire after the sunset, and it continued for almost two hours. According to the General Staff estimates, Russia-backed groups launched over 100 mortar shells. The attack was followed by sporadic hostile provocations which involved use of mortars. They stopped around midnight,” said Col. Lysenko. Militants also violated the armistice in Mariinka twice. 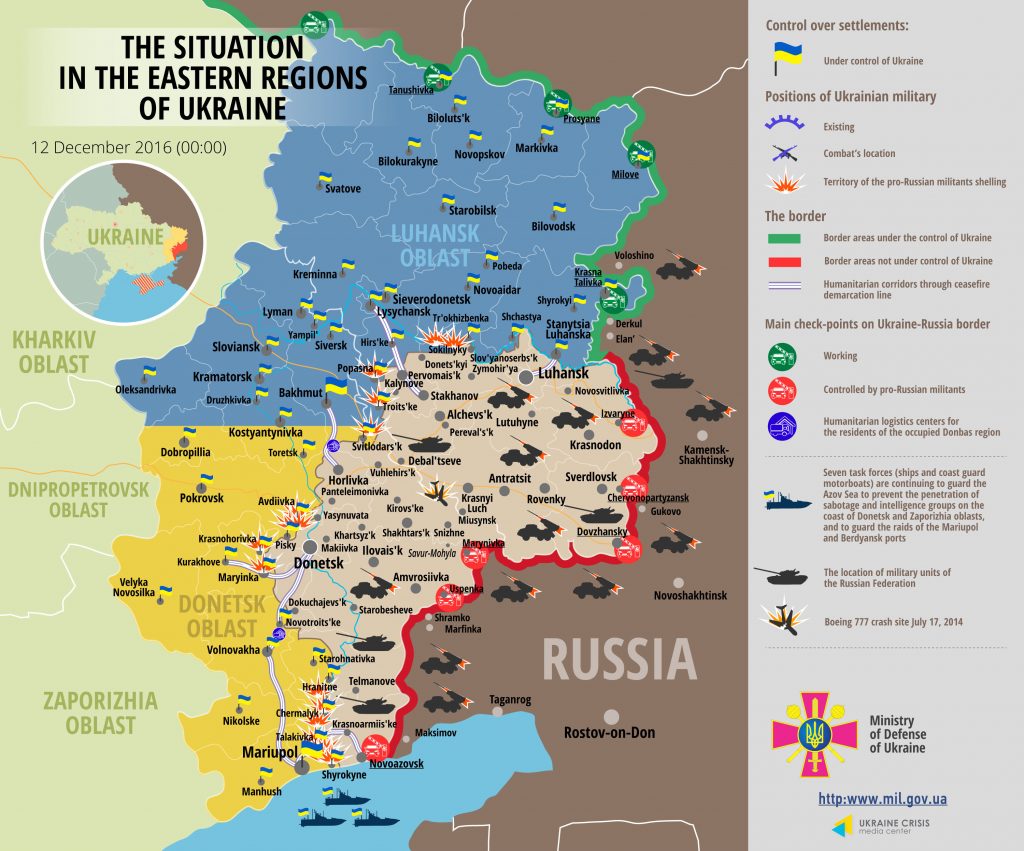 Militants violated the ceasefire nine times in the Luhansk sector, using heavy arms eight times. Krymske became the main flashpoint. “Six hostile attacks were registered in the village and the outskirts within 24 hours. Militants launched 60 mortar shells at Ukrainian positions and opened fire from armored fighting vehicle,” said the spokesman. Moreover, Russia-backed militants conducted one attack from small arms and another one from mortar launcher in Popasna.

In the Donetsk sector seven militants’ attacks took place, most of them in Luhanske, western outskirts of Horlivka and in Avdiivka. Militants became more active before the sunset and stopped shooting about 11 p.m. “The situation was the most difficult in the Avdiivka industrial area where the enemy massively shelled Ukrainian positions twice, two hours each time. Militants used mortar launchers during the second attack,” said Col. Lysenko.

The Security Service of Ukraine detained a militant of self-proclaimed “Donetsk people’s republic” (“DPR”) in Pokrovsk. “The criminal was a mortar gunner in the ranks of militants, until he fled from his accomplices because of internal conflict,” said Col. Lysenko. The detained is reported to plead guilty. He confirmed presence of career officers of the Russian Federation in Donbas.

Report on the military developments as of December 11 is available here. Interactive data on the shelling: chronology shelling chart and the interactive map.