Situation deteriorates as the militants increase the number of attacks, hotspots – Avdiivka and Mariinka-Krasnohorivka area. 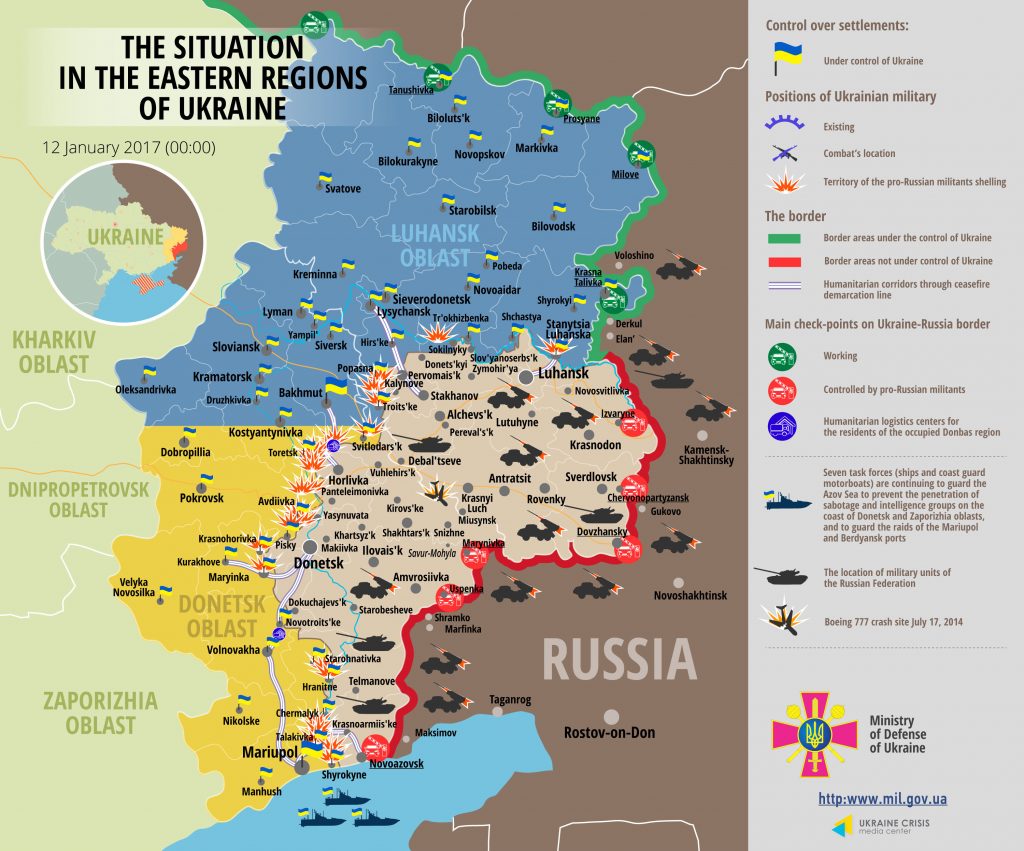 One Ukrainian serviceman was killed in combat yesterday and three were injured.

16 incidents of ceasefire violation by militants were registered in the Luhansk sector, and half of them involved use of heavy weapons. Shooting attacks took place along the entire frontline except for the Bakhmut road. “Attacks in Troitske were the most outrageous. Militants made a series of mortar attacks there and launched one artillery shell,” said Col. Motuzyanyk. Moreover, militants were shelling Ukrainian positions in Stanytsia Luhanska during four hours using armored personnel carrier weapons, small arms and various grenade launchers.

Hostilities took place along the entire frontline in the Donetsk sector. The most intense militants’ attacks happened in Avdiivka. The first shelling lasted two hours and took place before the noon. It involved use of grenade launchers and small arms. Russia-backed militants violated armistice in the industrial area in the afternoon for the second time shooting from mortars prohibited by the Minsk Agreements for seven hours. They also used artillery once. “Russia occupational troops violated the armistice along the entire Horlivka perimeter 13 times, using mortar launchers in addition to light weapons,” said the spokesman. Militants used small arms in the morning in the vicinity of the Donetsk airport. A sniper was shooting at Ukrainian troops in Opytne. At the Svitlodarsk bulge, intensity of hostilities reduced to one incident of armistice violation near Luhanske involving use of small arms. It happened after the sunset. In total, 19 militants’ attacks took place in the Donetsk sector yesterday, and heavy arms were used in five incidents.

The armistice in the Mariupol sector held in Dokuchaevsk area and Bohdanivka-Chermalyk frontline area. “The highest militants’ activity in the Mariupol sector was registered in Mariinka-Krasnohorivka area yesterday. Russian proxies were active in the evening there, conducting massive shooting attacks,” said Col. Motuzyanyk. Insurgents used no heavy weapons in Pavlopil-Shyrokyne frontline area. According to the General Staff’s estimates, Russia-backed groups launched over 130 mortar shells at Ukrainian positions. “One hostile bomb exploded near a five-storey building in Krasnohorivka, resulting in a local resident’s fragmentation injury. The man was taken to hospital in Kurakhove,” said Col. Motuzyanyk. In total, 27 militants’ attacks took place in the Mariupol sector yesterday, and three of them involved use of heavy weapons.